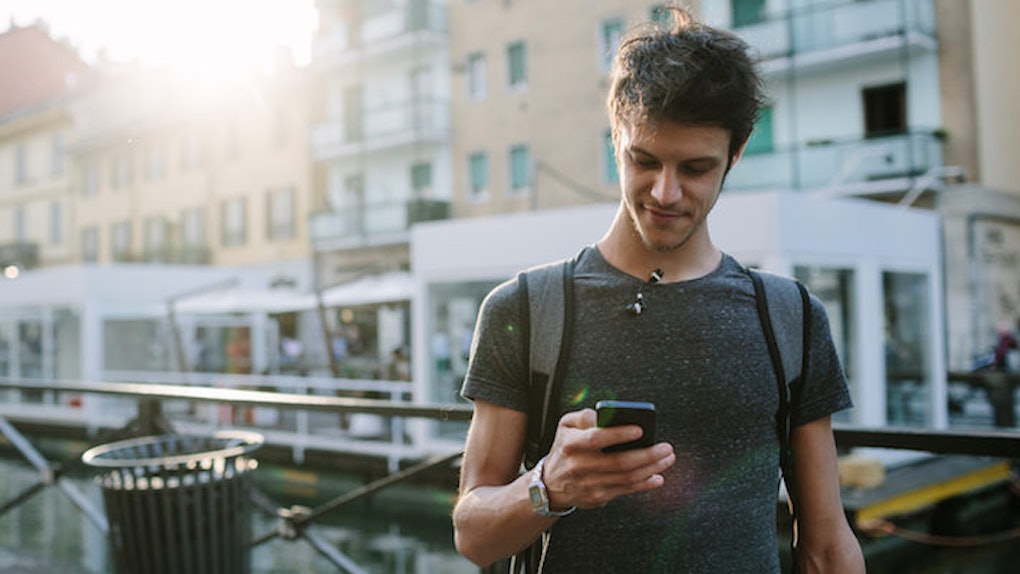 I'm in a toxic relationship. It's one of those bad ones you hear about, the kind that swallows every bit of you in an all-encompassing bite and squishes you around until so little of you is left.

I know what you're thinking. "Treez, how unlike you." Well, it's true. I got it and I got it bad. I can't get out but I need to before it eats me alive.

The relationship is with my phone.

Isn't that how it feels sometimes? When you're texting someone new, and it's non-stop and your life legit revolves around the vibration in your pocket?

I recently met someone new. She walked into a bar, and immediately became the most interesting person I could imagine. It was a perfect storm.

She's great. I mean, she was great during the four hours we spent together in person. She seemed great for the two weeks we spent texting.

And we were constantly texting, our rhythm so consistent you'd think each message was made of oxygen and needed for breathing.

These were my thoughts every day:

*gasp* I need some air. My eyes hurt. I'm going outside.

But I'm bringing my phone because she should be writing back in 15 seconds.

Wait, 30 seconds have passed. Now 45. What happened to her? Did she die? She broke the pace. What did I do wrong?

Are you kidding me? After all that, I ruined it? Let me scroll up and down to review the jokes. Too harsh? Too many emojis?

I fucking hate this game. Waste of my time and sanity.

It was a gloriously horrible place to be in.

Texting is an absolutely necessary stage in the modern dating world. It's tantalizing. It's thrilling. It's fresh. It's everything, really.

Yet at the same time, if you've ever done it before, you know you're more than likely racing to a red light.

Each message made me think I was getting to know her more. But all I was really getting to know was this artificial version of her, one that was coming back to me every few minutes without fail.

Bzz, bzz, bzz! There she was again, not really in my life but practically at the center of it, until I was in so deep I was answering in between bites of lunch because God forbid I didn't write back in seconds.

I meet women at bars, get their numbers and am lucky to see them three Saturdays down the line, if ever. If we meet on a dating app, forget it. There's a month of talking, minimum, before we link up.

Imagine seeing someone in person after already interacting with them 10,000 times. At that point, what is there left to impress someone with? How can you possibly be better than the best, scripted version of yourself? And why does all this feel so normal?

What's left to impress someone with? How can you be better than the best, scripted version of yourself?

So, what results is exhaustion. Disappointment. Fatigue. Compunction. The Fizzle and finally, The Burn Out. You condense months of conversation into weeks, into days, until soon, there's nothing left.

Welcome to every relationship I've had in the last two years. Welcome to the reason why none of them can even be classified as “relationships.”

But what are you supposed to do? Stop texting? Suggest you slow it down so you two have something to learn about each other when you're together?

That's not the world we live in. If you don't text, you'll never be together in the first place. But you can also overdo it, and if you do, soon there's nothing left to learn.

If you don't text, you'll never be together in the first place. But you can also overdo it, too.

And then you're done with people after two dates because they barely resemble people anymore. They're this weird mix of stranger and family.

Meanwhile, you've processed tons of information about their lives, learned too much in too short a time and also given a considerable amount away.

Before long, you've adopted this responsibility toward what? These messages? Or the person behind them? Or this uncomfortably mechanized combination of the two?

And the next thing you know, you're finally, physically next to this girl – actually next to her – and suddenly, neither of you has anything to say.

The illusion has been slammed and shattered, and now you have to use your words, and there are real stakes and you already know the answer to every question you're hardwired to ask.

So you stand there stupidly and you suck, and she thinks she did something wrong. But she didn't. Either both of you did or neither of you did.

Now that you mention it, she kind of wasn't what I expected either. She kind of sucks. We wasted all those hours staring at our phones for this?

I could have been texting someone else.