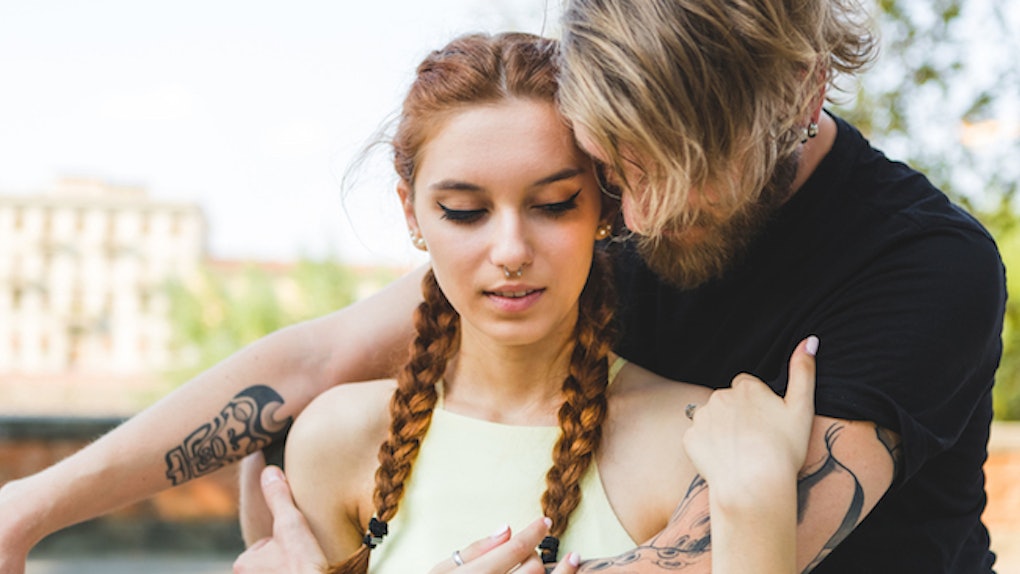 6 Signs A Guy Is Using You For Sex

Listen, sometimes, all you're looking for in a relationship is sex, which is totally fine if that's all you want. We don't need to have deeply intimate bonds based on actual romantic feelings with everyone. Women have libidos, too, and sometimes, we just want to get laid. Hallelujah.

But if you're looking for something more substantial, then it really sucks when you come to the conclusion that you're just his booty call. If your feelings aren't reciprocated, and he's just looking to hook up with you and get out the door ASAP, then you're not getting the relationship you deserve.

Sometimes, it's really hard to tell where you stand with a guy, especially in this social media dating age, where we operate in such a grey area. It's easy to get a lot of attention from a guy without him actually being present in real life.

I wanted to know the red flags that your guy is actually just using you for sex, so I reached out to Mark Stefanishyn, a dating expert, and Susan Ball, self-love activist and author of Courage and Grace: From Broken to Blissful, the Journey of Building Joy During Your Recovery from Abuse, for insight.

1. He Says He Loves You Immediately

I once dated a guy who asked me to be his girlfriend on our second date. He had never had feelings like this before! He wanted to move in together! He couldn't wait to introduce me to his parents!

He loved to show me off in public and introduce me to his friends, but the moment he had any real boyfriend responsibilities, he was suddenly unavailable. But you know what he was available for?

Ball says if you hear words like, "I've never met anyone like you baby. We are going to be together forever. I love you," too soon after you start seeing someone, then it is definitely "time to bounce!"

Your guy is probably into the fantasy version of you, and your relationship is built on lust.

If he can't keep his hands off of you, then that's actually a bad sign.

Ball offers some examples: "You're out together, and he constantly wants to kiss you, rub you, grope you, and tells you he can't wait to get all naked."

Man, I've been there. Why is your hand, like, in my butt? We're in public!

"If he is not talking to you about anything other than sex or making advances on you that are not playful, but outright sexual, he is only interested in one thing. If this is happening, ask him to stop [because] it makes you uncomfortable, and you'll notice he will stop talking, put on the big pout, maybe even stomp away. And that's a good thing," she continues.

If he gets bummed out by the idea of an actual connection with you, or if listening to you seems like sooo much work for him, then kick him to the curb. He can find somebody else to grope. No, thank you!

3. He Doesn't Want To Learn More About You

"Either he wants to know about you and what makes you tick, or he doesn't," Stefanishyn says.

"If his eyes glaze over every time you start talking about your love of knitting, if he always turns the subject back to how great he is at Call of Duty, or if it just never really feels like you have his full attention, then chances are, he's not interested in moving forward. If a man wants a relationship, he naturally wants to know who you are and what you are up to," he clarifies.

But sometimes, if a man is disinterested, that doesn't necessarily make him a "bad guy." Potentially, that just means you guys don't have much more in common than your sexual chemistry.

Stefanishyn says, "It's a tough truth to hear, but from a man's perspective, when a woman doesn't have much ability to keep a conversation going or if she's only into partying or hanging out with friends, then the only thing he has left to be interested in is sex. "

He has some advice for how to make a guy fall in love with you in the long run:

So if you can't seem to keep the attention of your dream guy, or if you think all men only want sex, it might be time to broaden your horizons and get super interested in things you love. A good man who wants something deeper is always going to have a weak spot for a woman who is excited to be alive and passionate about her interests.

4. He Makes You Feel Guilt Or Shame

Feel like you have to have sex with your guy in order to make him happy? Like it's a defining part of your relationship?

Ball explains, "If you start to feel that you need to give in to him and have sex to make him happy, he has successfully shamed you into sex, and that will not lead to a long-term relationship. Ever."

Additionally, the guy who shames you into sex really guilts you for not giving in to him.

"He wants some sort of acknowledgement or 'payment' for taking you out or spending his time with you. No one who wants to be with you long term wants guilt sex," she continues.

5. He Isn't Confident In His Relationship With Himself

Yeah, if he doesn't even know himself, then most likely, it's going to be hard for him to get to know you. Makes sense, right?

If a man has any intention of building a lasting relationship with an extraordinary princess, he must work on his relationship with himself by slaying the personal dragons holding him back from his full potential (since the princess will demand nothing less). It's a level of responsibility many men aren't ready for.

When we go into a relationship, we want to be the best version of ourselves. So if your guy isn't there yet, it might not have anything to do with you.

I recently had this happen to me, when I got into a very whirlwind relationship with a guy who couldn't afford his apartment, didn't have a steady job, and felt really unsure about his career, finances, and family relationships. Eventually, our relationship fell apart because he didn't feel great about himself.

"If there's no evidence he's working on his relationship with himself — through a combination of his health, his career, his passions, or internal dragon slaying — it's unlikely he's going to be able to shoulder the responsibility of a serious relationship," Stefanishyn concludes.

6. He Outright Says He Is Only Interested In Sex

Yeah, well, this makes sense. But Stefanishyn points out, "This seems obvious, but it's an extremely common mistake women make."

Sometimes, we hear what we want to hear or hope that we can change people. But guess what? You can't change someone.

The feminine story is to take a rough, unrefined bad boy and tame him — like Belle from Beauty and the Beast. She takes an uncaring, monstrous brute (who doesn't want a relationship) and with a few lessons in etiquette, table manners, and true love's kiss, she transforms him into a kind, loving, and loyal prince. The same general theme is present between Ana and Christian in 50 Shades of Grey. Love or hate it, it was the fastest selling novel of all time because it directly touched the feminine subconscious.

Oh man, is this true or what. Why are women fed this bullsh*t? Society has ruined us!

Stefanishyn warns that women shouldn't try to change a guy and his desires, no matter how tempting it is.

"So when he says 'I don't want a relationship,' she should take that statement seriously and not let her subconscious say, 'PERFECT! LET'S TAME HIM!' At that point, she's free to wish him well and carry on looking for what she wants."

You can't change someone, and you should take men at their action and their word. If it seems like he is only using you for sex, well, then he probably is.

But if someone likes you, then it's easy to tell. A guy will make sure you know that, because he won't want you running off with someone else.

Stefanishyn sums it up in one sentence: "If you want to be sure you are moving toward a meaningful relationship, then do not attempt to tame a wild and disinterested beast that has no plan of becoming a dragon-slaying hero."