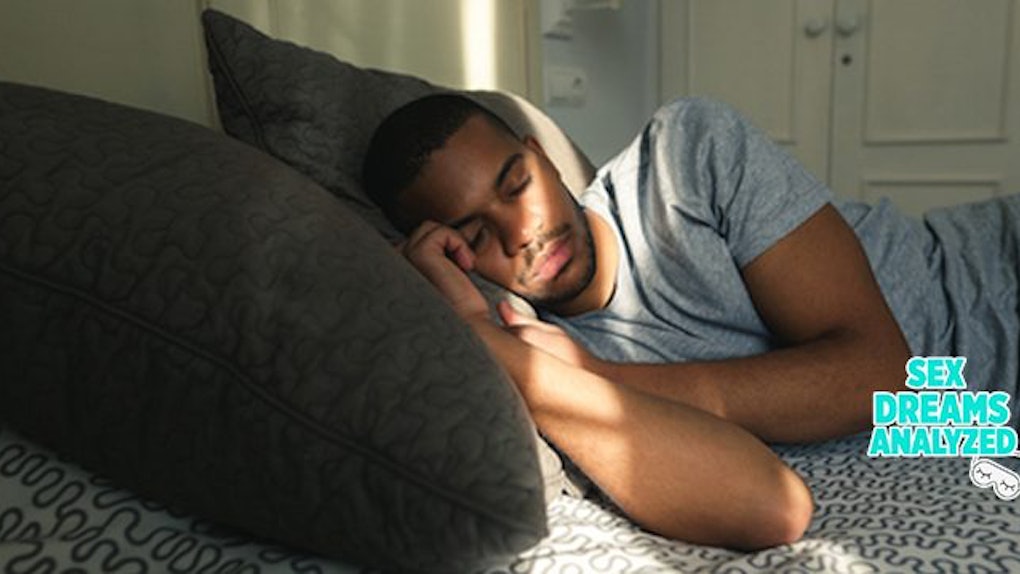 Sex Dream About A Hotter Version Of Your Friend Meaning

This week's submission is from Alexander*, who dreamt about a sexual encounter with a much sexier version of his platonic female friend:

OK, so, I had a dream that I was visiting my friend (let's call her Jane*). The outside of her house was grey with a light grey roof and a chimney. However, as soon as I entered the house (I had a key), it was neon and purple everything — neon orange was the most vivid one — and we sat on the purple couch and watched part of a movie. Fast forward. Jane went to get some drinks and she was gone for a long time. I fall asleep and wake up, which felt weird that morning, to find her sitting on my lap, wearing a Japanese schoolgirl swimsuit and slightly grinding with a now really big butt and DDD sized boobs. She says to me, 'Finally awake?' At this point, I say, 'Get off!' and tried to push her off of me because I hadn't consented to this yet.

As a last resort, I tried to push up from her bum, but then things got hard. She, feeling a sudden stab at her thigh, says 'Oh... now what's this?' She then got off and did a spin, got down to crotch level and... well... take a guess... all the while her clothes disappeared and I was suddenly on the floor. She then straddles me and a good five minutes later... well... the white arrow paid a visit. That's the end, but I do also have some facts: 1) I am attracted to this girl. 2) My penis was bigger than it is in real life. 3) She had makeup on when she doesn't wear it.

Your dream starts out outside, which means it is about something that you need to get 'out in the open,' which I would guess is your feelings towards Jane. Her house represents your perception and feelings towards her... where she "resides" in regards to her feelings towards you. Grey on the outside but loud neon colors on the inside tells me you may feel she appears neutral to you on the outside, but on the inside she may be alive with color and passion for you. You then 'wake up' in the dream. Waking up in a dream is really about having an awakening or sudden realization in real life. I think, through this dream, you are safely exploring the possibilities with this woman.

Waking up in a dream is really about having an awakening or sudden realization in real life.

She's on your lap and has much larger ta-tas and tushy than in real life. This suggests that you may have an exaggerated view of her in some way, which is also why your Johnson was bigger as well. Ask yourself if you've been putting her on a higher pedestal than you ought to, or if you tend to have a aggrandized idea of what a relationship with her might be like. The way she is aggressive with you and you push her off because you haven't consented makes me think you are feeling pressured (either by others or by your self) to open up to her about how you feel, even though you aren't ready to "consent" to that honesty yet. That's also why her clothes disappeared... nudity in a dream can represent open honesty, getting something off your chest, having nothing to hide, etc.

The sex and orgasm that follows, well... that could simply be the icing on the cake of this naughty little dream. However, on a deeper level, it is about your desire to "come together" (ahem) and unite on an emotional and psychological level. So what is the takeaway from all of this? Well, I think you are telling yourself, through this dream, you're not quite ready to open up to her yet.

You are telling yourself, through this dream, you're not quite ready to open up to her yet.

In the meantime, continue to get to know her and start working on how you would feel most comfortable letting her know... without creeping her out, of course! Open honesty is always best, especially when done with tact and grace.

This interpretation was particularly interesting for me.

I think what was cool for me was that even though he's convinced he has no attraction to his friend whatsoever, Lauri insists his dream means there could be some sort of underlying feeling for her that he's not addressing.

Did you read that, people? Turns out your sex dream about your random friend isn't quite as harmless as you thought it was.

I hope this was helpful to Alexander and anyone else having a dream like this.