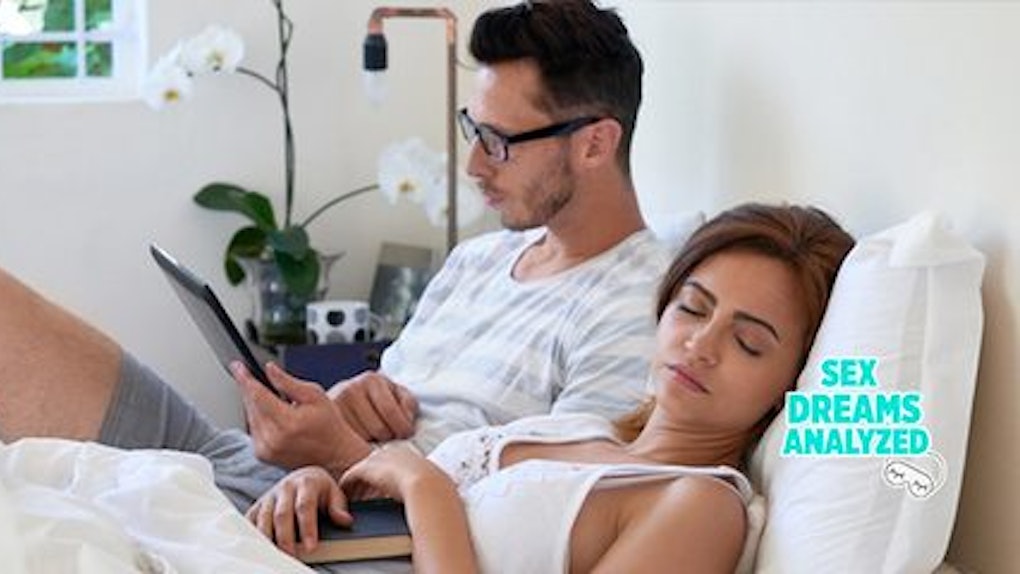 What A Sex Dream About Watching Yourself Cheat Means

This week we have Marisol* who had a sex dream about watching herself cheat on her boyfriend with a stranger:

I just had a dream within a dream that was about cheating with a stranger (including a very detailed sex scene). I was seeing it from a third-person perspective and was mentally screaming at myself — no lie. Now, I've read on several occasions that this dream could be interpreted to mean that I am feeling guilty about something I've done, but that's not the case at all.

I haven't done anything to make myself feel guilty; however, lately, I've spent a lot of time feeling self-conscious and ashamed of my body, due to a comment my boyfriend made (without realizing it was hurtful). I think that may have something to do with it, but I don't know for sure...

When you have a third person perspective in a dream, it is for a very cool reason! The infinitely wise dreaming mind will do this to help you detach from the issue at hand, so you can get a different 'point of view' to help you step outside the situation and, therefore, make a better decision. It's hard to see the box when you're in it, as they say. I'd like to know what you were screaming at yourself for. Whatever it was, you can bet it was you being brutally honest with yourself... not about banging a stranger, but more about how you reacted to your boyfriend's comment.

Having sex with an unknown man in a dream is one of the most common sex dreams we women get. The unknown man represents a part of ourselves we are not terribly familiar with: our male part. That is the part of us that has balls, is assertive and is not overly sensitive. Through this dream, you are merging those qualities into your self, just as you took the man into your body.

Having sex with an unknown man in a dream is one of the most common sex dreams we women get.

In a nutshell, this dream is telling you to man up and stop being so sensitive and wasting your valuable time and energy on something that was not intended. Stop body shaming yourself. We women are our own worst critics. It's ridiculous.

Remember, nothing is sexier than confidence!

Being in a relationship can bring about insecurities in even the MOST confident of people. It's just a byproduct of loving someone who also happens to be the only person you're sleeping with.

You're obviously going to care what that person thinks about your body. So I get where Marisol was coming from with when she was a little hypersensitive to her boyfriend's comment.

As for Lauri's interpretation of her dream, I think she has a point. As hard as it is to let go of our insecurities, it's important to figure out a way to do so and to really let ourselves love and accept ourselves for who we are.

I hope Marisol and anyone else who had a similar dream find this helpful.