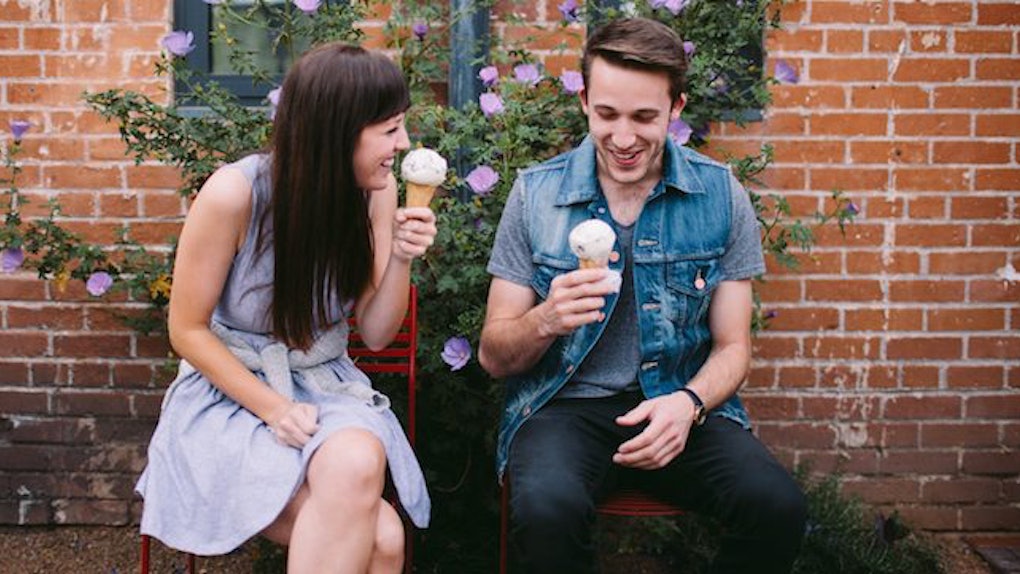 Dating is basically a second job.

And since we're not getting paid for it, we at least want some type of reward out of it.

That's why it's a serious let down when you go out with someone, only to find out that it was a relatively waste of time.

If you don't feel that immediate spark, your mind begins to wander, and all you can think about are all the other fish in the sea you'll be swiping through next.

Sometimes, though, we luck out, and someone walks into our life and changes it.

You feel like you're connecting on such a personal level that you're shocked over how well things are going.

At least, that's how you feel in your head, because you really have no idea what he's thinking, and whether or not he's going to want a second date after the first one.

To help put your mind at ease, here are the signs that tell you he's interested in seeing you again.

1. He cared about you more than his drink.

As much as I claim to looooove tequila, I could honestly not care less what type is in my margarita.

If I'm on a date and most of my attention is directed towards the variety of mexcals on the menu, you know that we're off to a bad start.

Now, if the guy you're out with cares about you more than his $13 glass of alcohol, you know you're in business. If you guys have even managed to hold eye contact and the ice has slowly begun to dissipate in your drinks, take that as a good sign.

And if he orders another drink, you might as well start picking out your china patterns.

2. He's looked at you more than his phone.

Like any millennial, I consider my phone to be an extra limb.

Even when I haven't received a notification in hours, I still find it necessary to repeatedly check every app possible in hope something new will pop out of thin air.

Putting your phone on silent during a date is a big deal. That means you are dedicating your full attention to this one person, with no interest to interrupt or take away from your time together.

If a guy is out with you and isn't itching to check the score of a sports game (or message back another girl), then feel lucky.

Odds are, he's into you and wants to see you again.

3. The sexual references were very limited.

On a date, it's important to make sure you two are both on the same page.

If a guy repeatedly makes innuendos or finds a way to bring up his penis, you can bet he's counting down the minutes until he gets in your pants.

While you can't judge the man for being attracted to you, be aware of how much sex is inserted into your conversations.

A good ol' fashioned sex joke is fine, if timed right and when you both have gotten comfortable with each other. But anything else is a bit overboard.

If he keeps his hands to himself and his dick away in his pants, then he's a class act who is looking for a round two with you.

4. He made the effort to already plan for the future.

I never find the need to beat around the bush when I'm on a date.

If we don't mesh well and there's no spark, there's no need to pretend. Why bother dragging things out when in reality, we know nothing will ever work?

On the other hand, if we hit it off and I can't think of anything else I'd rather do than to see you again, I'm going to make sure you know that.

If a guy wants to schedule a second date at the end of your first, that's a clear sign you'll be seeing him again.

He's interested (clearly, really interested) and doesn't want to play the waiting game for your next hangout.

Take that assertiveness as a compliment.

5. There's never a break in conversation.

Chatting it up with a stranger can be a little tense.

Dialogue can seem short-winded, with most of your talk focused on the boring details of where you grew up and what you do for a living. It's when you two start having a full-blown discussion that you know you're onto something.

If you're talking to a guy and things are getting passionate — almost heated— that's a good thing. You've found common ground and are invested in what you're saying.

If he just wanted to hit it and quit it, his responses would have been quick and simple-minded. Instead, he's openly discussing things in hopes of finding out what your interests are on a more personal level.

A good conversation shows he has other interests on his mind — including picking up your heart-to-heart for another time.

The best kind of dates are the ones that have you wishing it could last forever.

While a rare occurrence in my dating career, I've been out with guys before who end up being the total, unexpected package. They're cute, conversation is continuous and watching the clock is never an issue.

Before you know it, we've hit hour six, my feet are bleeding from all the walking we've done and I couldn't care less.

It's those kind of interactions that let you know something is beginning to form.

If you're out with a guy, and he never hints at asking for the check or claims he has to follow through with an earlier scheduled plan, it's because he probably doesn't want to leave your side.

If that's not a sign he's into you, I don't know what it is.