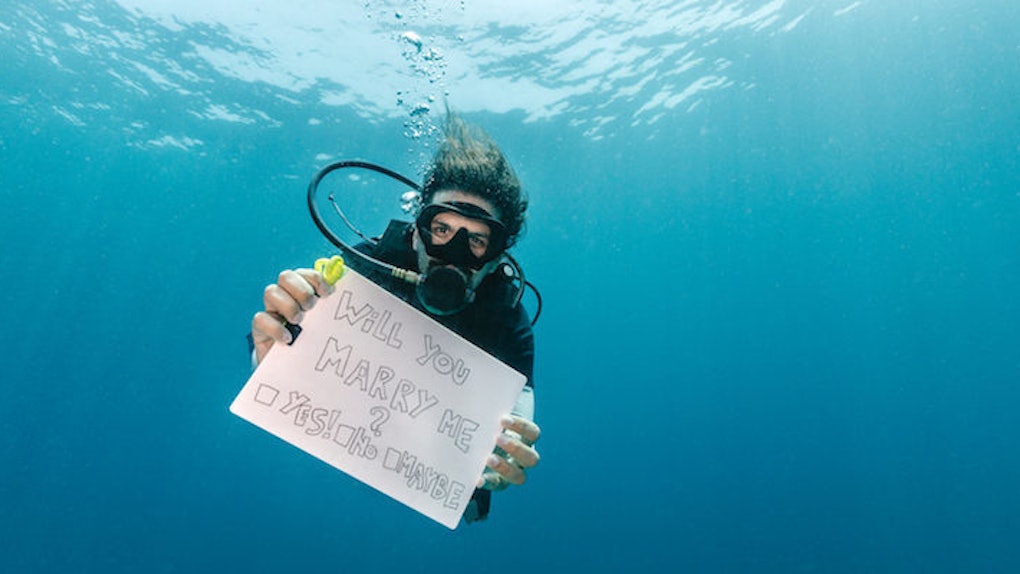 In a society where romance is thought of as typing #bae underneath an Instagram photo, it can be hard to figure out how to propose to your girlfriend in an old-fashioned, romantic style that will steal her breath away.

Here are some tips for all you men who are thinking of taking that next step in your relationship:

1. Ask for her hand in marriage.

Ask her dad, mom, aunt, uncle or cousin. Basically, ask whoever watched over her as a child. Ask the person who held her hand when she crossed the street, who helped her with homework, who gave her advice and who grounded her when she was acting foolish.

Asking for her hand in marriage may seem like an old-fashioned thing to do, but nothing shows more respect for her family than including them in your proposal. They'll not only think highly of you, but they'll also feel lucky she has someone who cares so much about making her family become a part of his.

2. Think back to the little moments.

Yes, putting her diamond ring in a glass of champagne over dinner is romantic, but is it what defines the two of you as a couple? Maybe you want to pop the question to her in the same café you took her to on your first date.

Maybe you want to propose to her while sitting on the couch in your living room because it's the exact spot where you looked at her and realized she was "the one." Pick up on the little moments that will probably be insignificant to anyone except the two of you. Popping the question in a way that is reminiscent of your beginning as a couple is beyond romantic.

Proposals are a big deal. This is the story you're both going to be telling practically everyone you know for the rest of your lives. It should be magical, but it should also just be organic.

Renting a hot air balloon, flying over top of the Eiffel Tower and bungee jumping off the Brooklyn Bridge definitely have that "wow" factor, but they are also just too over the top. Hence, they run the risk of being too complicated.

Forget about planning and holding your proposal to a specific day. Half the time, proposals are done in the moment, when things aren't going as you originally planned. If she loves you the way you know she does, she's not concerned about things being fancy or perfect. She only wants to start her life with you.

Relax, and it'll all work out in the end. Simplicity should never be overrated.

4. Talk about it beforehand.

Don't tell her when you're doing it. But you do want to ask her how she feels about it.

Despite how much she may be in love with you, she may not be ready to settle down yet. That's OK. It doesn't mean you need to go all Ross and Rachel and take a break.

It may mean she wants to travel with you, live with you for a bit longer or maybe even move to a new city instead of spending a ton of money on nuptials. The worst thing you can do is consider your proposal without thinking of the other person involved.

5. Ask her best friend what kind of ring she likes.

Her best friend will want to be involved. So, take advantage of her and ask her what kind of ring style your girlfriend likes. Does she prefer a square cut or a princess cut? Does she care about a big diamond, or could she care less?

Her BFF knows all the details, so hit her up. For example, my best friend knows I don't want a princess cut diamond at all. That's my only requirement. So, boyfriend, in case you're reading this, know that my bestie is available on speed dial.

I've seen plenty of proposals, and if there's one thing I can honestly say, it's that the best thing you can do is be completely yourself. If that means sliding the ring to her over dinner at Olive Garden, so be it. If it means getting down on one knee and confessing your undying love for her, do it.  If it means taking her out for Starbucks and propping the ring between the pages of her favorite book, go for it.

Asking someone to marry you means you're asking him or her to spend the rest of his or her life with the real you. So be the funny, charming, off-beat, adventurous man you are. She won't want to be without you.