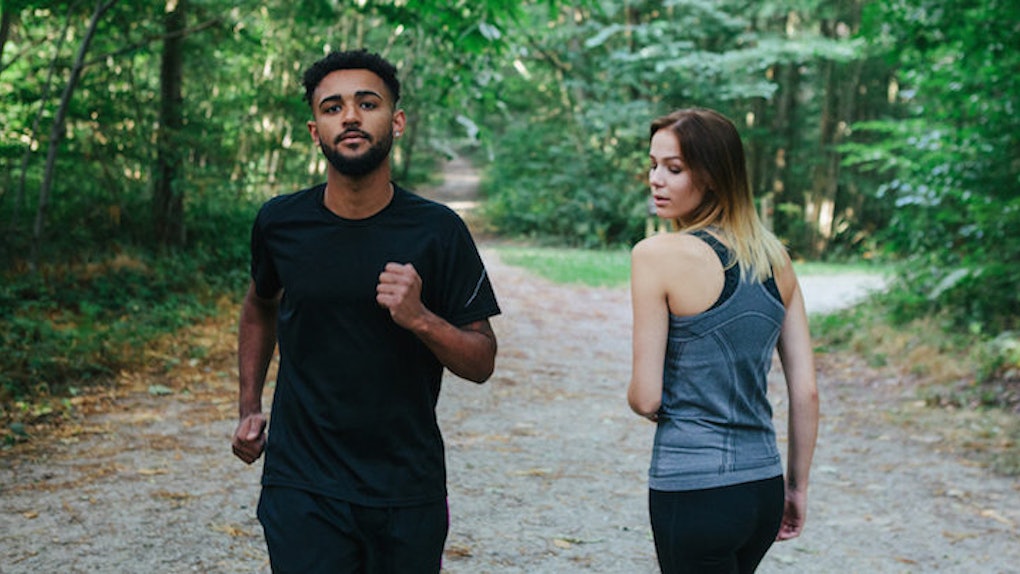 It's something that we all think about (whether or not we're willing to admit it): What the heck would you say to someone you once loved if you bumped into them on the street?

While it's easy to rehearse a monologue of "I'm sorry," or "I hate your guts," it's hard to know how you'll actually react when you're walking down the street, and suddenly, BAM! Their familiar face is right in front of you.

While these run-ins haven't happened yet, here's what 9 women think they would say to their exes if they ever ran into them again:

I've rehearsed this time and time again. If I ever ran into my ex, I would look him in the eye and tell him that he sucks, and that I'm so glad we broke up because he's an awful person and I'm a good person. I know that sounds very angry and intense, but it's just been something I am eager to get off my chest, and hope it happens in person.

It's taken my several years, therapy sessions, and new love interests to figure this out, but I'm so thankful that my old boyfriend broke up with me when he did. He saved me from many years of complacency with the wrong person. He saved me from getting married to a person that I knew deep down I didn't want to spend my life with. He saved me from the possibility of just falling into the trap of settling. I haven't seen him or spoken to him in 8 years, but if I did run into him, I would simply hug him and say thank you.

"I Want My Money Back"

I was such a sugar momma to my ex. I bought him every single thing. I even paid half of his rent because he didn't have a job or a lot of money in savings. I bought his groceries and paid for his gas. We only dated for 6 months, but seriously, in that time I probably spent $10,000 on him. I was an idiot and thought that I could buy his love and interest. I broke up with him when I realized that he was using me and he was lazy. I want him to pay me back. I've tried to get him to, but if I see him in person, that'll be the first and only thing I ask.

"Pretend You Don't Know Me"

If I ever saw my loser of an ex-boyfriend on the street, I would pray he wouldn't see me and I could keep walking. If he did come up to me, I would say, "Do me a favor and pretend you don't know me." I'm honestly embarrassed I ever dated him. I have nothing to say to him and wish I was invisible if we ever were to share the same street corner.

"Give Me An Explanation"

I'm so desperate for closure with my ex that if I saw him in person, I'd hound him for a reason why he broke up with me. We dated for less than a year and then he ended the relationship out of the blue. I honestly couldn't figure out why or what I did. It was so weird. I always felt like it had to be because of someone else. So that's what I think. I just want to know the truth.

"I Know You Cheated On Me"

My ex won't admit that while we were dating, he was still active on all his dating profiles. My friends saw him on there and send me screenshots of his profile. I know he was cheating. When I broke up with him and showed him those screenshots, he still denied cheating. If we ever crossed paths — and I know we will — I would just say that I know you cheated on me and you're stupid for not admitting it.

A week after we broke up, my ex tried reaching out to ask if we could still be friends. He found someone else which is why he dumped me, but said he wanted to keep our relationship in the friend zone. I said no way. If we ever saw each other, I'm so certain he'd bring that up and I would laugh and say, "We will never, ever be friends, so leave me alone. Bye."

"I Really Am Sorry"

I was the reason my relationship ended. I messed up by not changing or fixing things about myself that were ruining the relationship. I miss my ex-boyfriend so much. I'm trying to get him back, but nothing is working. So, I guess if I saw him and he would agree to talk to me, I'd just say I'm sorry and hope he would agree to get coffee and sit down to chat.

I've thought about this question a lot. It's something I rehearse happening over and over in my head so I am prepared for the moment when it happens. I know it will. So, what I'll do is just say nothing. I'll hopefully look my best, and then just look him in the eye and say nothing at all.

Tell us: What would YOU say to your ex if you ever saw him or her again?