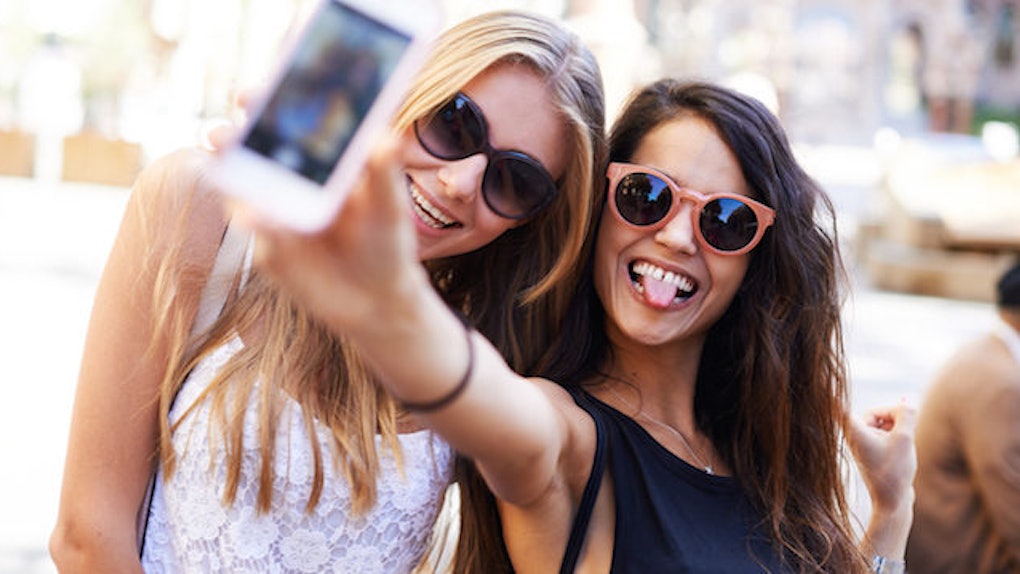 Why I Really Post About My Relationship On Social Media

"People who post about their relationship on social media are so, like, INSECURE. I can't even get over it."

"Ew, I know. Like, whyyy would you feel the need to publicly proclaim your love if your love is, like, real love? What are these girls trying to prove?"

This is the kind of conversation I somehow manage to hear just about every single day of my lackluster life.

Mostly, though, I hear it at bars. Two babes will be feverishly scrolling through their Instagram feeds and scoffing at oh-so-pathetic Ryan and super-sad Stacey and their "transparent" Instagram affair.

There seems to be this collective understanding that if you post about your relationship on social media, you're not actually in love.

Even sexologist Nikki Goldstein recently told the Daily Mail, "Often it's the people who post the most who are seeking validation for their relationship from other people on social media." Confirmed by an expert, kittens.

Well, that sweeping generalization is not only overly simplistic; it's boldly presumptuous.

If you feel compelled to express to the outer world just how wildly in love you are, go for it.

In this age where faux apathy is the hottest trend, I happen to think public displays of affection are a fabulous breath of fresh air.

I post about my love life on social media all the time. And while I might be crushingly insecure about my sudden onset of "stress highlights" (grays, SHH!) or the underlying suspicion that my worst enemy is right about me (that I have zero talent), rest assured my public expressions of love via social media are not rooted in insecurity.

If I'm posting about my relationship on social media, it's not for any reason other except that I'm fiercely in love.

If I'm posting about my relationship, it's not for any other reason except that I'm fiercely in love.

When I have fiery, passionate feelings bubbling inside of me, I have to let them boil over. Some of us were just born with that irrepressible urge.

For me, it started in ninth grade — a time when I was teeming with hormones and a reckless confidence in my insecurities. I had a public online journal, an early 2000s phenomenon known as "LiveJournal."

Every thought that swirled through my unfiltered teenage brain was feverishly typed into my LiveJournal for all my peers to see.

Now, I share my grown-up (sort of) thoughts and feelings on the internet for a living. But my desire to share my love on social media has nothing to do with my career or money.

I'm just wired to express — some of us are. I'm ferociously curious about what goes on behind closed doors in people's lives. Give me the good, the bad and the ugly, baby! Give me the all the gory details (but give me the pretty ones, too).

...I can't help but post intoxicatingly-in-love pictures when I'm in love.

I use social media as an outlet, as cringeworthy and gross as that sounds. Why would I only post about the things that fill me with rage and leave out the positive things that make me feel good?

Why would I only post about the things that fill me with rage and leave out all the positive things?

And I see a lot of people like me out there, whose relationship is currently playing a big character in the movie of their lives right now. So obviously, their lovers make frequent starring appearances on their social handles.

Isn't that what social media is? A kind of movie of your life?

Sounds narcissistic, doesn't it? Like, why does anyone care about anyone else's personal life, right? I don't know why we care, but we do. Why else would social media be so unfathomably popular?

Granted, I can feel when you've made your social media a highlight reel. There is a palpable false energy to the incessant #blessed hashtags — I'm not denying that.

But I can also feel the moments you're sharing with us that are blazingly real. And most of the time, the love moments captured on Instagram are some of the most real social media moments I see.

There is a palpable false energy to the incessant #blessed hashtags.

It's vulnerable to declare your for love someone on a public forum. It's bold to unabashedly confess to this bitter, cold world that you actually have ~feelings~ for another human being.

Being honest and raw about your feelings makes you a lot of things, but it doesn't make you insecure. It takes an impressive amount of confidence and a strong sense of self to be vulnerable on social media.

And there is nothing in the world more vulnerable than being madly in love and unafraid to admit it.

There is nothing in the world more vulnerable than being in love and unafraid to admit it.

So if you're currently hesitating to post that appreciation pic of your partner on social media because you fear everyone will think it means "your relationship is failing," post that shit anyway, girl.

Spending our lives curating our social media feeds to appease the judgement of others? Well, that's REAL insecurity, baby.