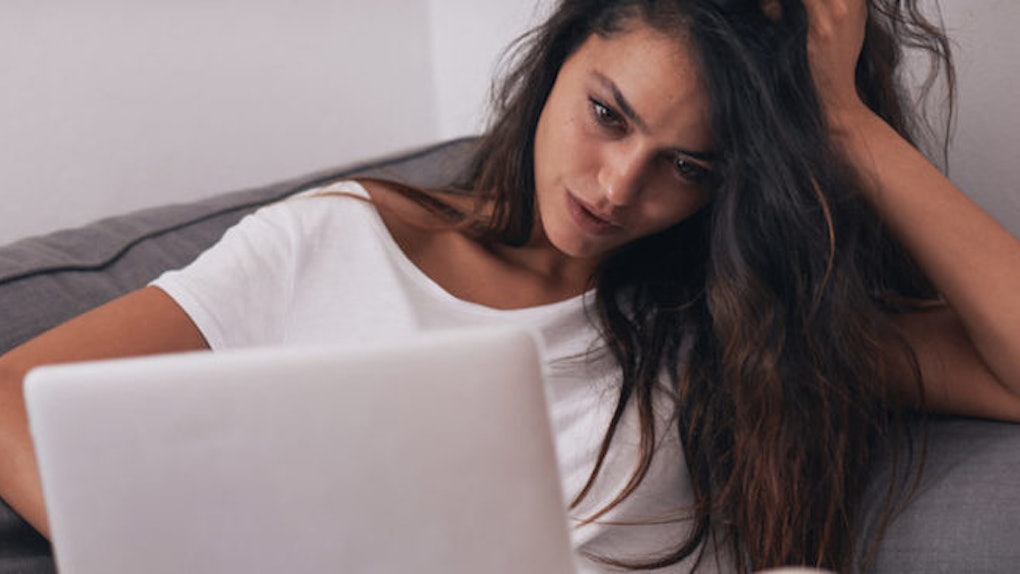 Online Dating: Breaking Up With Someone You've Never Met

When Asher walked through the stairs of our college, heads would turn and careless whispers would fill the air. The conservative clones of our class didn't understand self-expression in the form of piercings, (excessive) tattoos, and black nail polish on a man. But that's exactly what Asher was – out there and not giving a you-know-what.

I admired that about him. He was dangerous, with a parallel perspective and I was a Virgo looking for my next alternative love “project.” But people aren't projects and Asher made that clear from the start. He chose to be my friend, though we often exchanged a kiss or two, but soon I realized that the kind of woman he was looking for needed to have less realism and much more fantasy. So, he met her.

She resided in an Avatar-based chatroom online and her name was Destiny. Well, at least her screen name. Her online persona was a pale goth with leather outfits and brown hair. Asher was also now renamed “Maximillion” with a virtual representation that more or less matched him in real life. They hit it off instantly. They talked/typed about their mutual love for heavy metal and their general loathing of all things mainstream.

It was a match made in online heaven and soon their kissing “avatars” became their display pictures on social media and distance made the heart grow fonder.

I personally didn't get it. How could you have feelings for a person you had never met? He was better off having feelings for me, in my opinion.

Sure, we didn't have very much in common, but at least I was being myself. She was probably a blonde playing a brunette. Cynics (like me) and experts (unlike me) have forever argued about “selective representation” online. But once their chats turned into Skype sex, that argument seemed less and less groundbreaking.

In fact, Jeffrey Hall of The University of Kansas (a lead author on The Truth About Online Dating And The Link Between Depression And Relational Uncertainty) found that people looking for romance online actually behave very much as they do in face-to-face.

He confirmed that his “findings dispel the myth that people using online dating are different than anyone else who might find a relationship through friends, school or work.” According to him, “the likelihood of people misrepresenting themselves overall is actually very low.” So, I guess that was a good thing for Destiny and Maximillion. But she did turn out to be blonde.

He didn't seem to mind though. She satisfied him. His urges to be negative and broody were less noticeable while they dated for the fall, winter, and spring semester. He almost had a pep in his step. Almost.

Like Professor of Psychology at the University of Rochester Harry Reis says in Online Dating Research Shows Cupid's Arrow Is Turning Digital: "the Internet holds great promise for helping adults form healthy and supportive romantic partnerships, and those relationships are one of the best predictors of emotional and physical health."

Even though Destiny was a cringy stripper name and role-playing online was not my style, I couldn't deny that Asher found solace in her virtual arms. It perhaps even made him feel less alone after the back-to-back loss of his mother and grandmother.

She held him down. His perceived sense of social support grew and he wanted to maintain that feeling, even if it was across an ocean.

So, set in the relationship maintenance behaviors, he would text her whenever they were both awake over the time difference. They'd Skype at his night time and over her morning coffee and they'd even do what any “regular couple” does – talk about their day, dreams, and desires.

Was it so hard to believe that was a basis of a real relationship? Well, not if I listened to what research in the Human Communication journal implied.

In Couples Go Online: Relational Maintenance Behaviors and Relational Characteristics Use in Dating Relationships, researchers found that online communication whether by email or IM, allowed relational development to occur in similar fashion to face-to-face communication. Whether I liked it or not, it was entirely possible, according to science (and according to Asher) for him to develop feelings for a person he had never met.

He had the perfect formula for romance: honesty (somewhat), compatibility, a support system, and behaviors present in any normal relationship. Then, what could go wrong?

I wasn't sure, but on a stormy day in the city, he wanted to watch a movie, and during it he made advances that felt wrong for a committed man. Though they felt right for me because I was single and celibate for six months. So, I gave in.

I did, however, during the popcorn break, inquire about his date with Destiny. His words were evasive but mostly implied that she “wasn't interested in taking it to the next level,” he had offered to “pay for a flight for her to come visit but her parents were strict Christians” and “she'd rather just let it be an online thing.” So, he called it off and then called me.

It didn't feel particularly pleasant being a friend-zoned side chick to Asher's virtual reality love, but I was certainly intrigued as to why Destiny did not want to pursue the honesty, compatibility, and physical company of Asher.

Just like me, she didn't want to have the white picket fence with this boy, she just wanted him on her resume of online experiences.

The effect of which was very visible in the next three months of getting to know Asher more. He would want to have long talks on the phone now, when he had previously preferred ghosting me and being MIA.

It almost seemed that he was constantly trying to replace his previous supportive interactions and their positive effects with our newly forming camaraderie. After a night of heavy drinking, he even suggested a virtual wank and cry, but it all seemed a bit too odd for my liking. So, I pointed him in the direction of rum-infused ice cream and forming offline friendships.

At this point, we both acknowledged whether you have a face-to-face or a virtual breakup, your brain still prioritized thinking about an ex-lover the same way. It didn't matter whether his relationship was online, offline or in his head.

University of Michigan social psychologist Ethan Kross found in The Pain of Social Rejection that the same parts of the brain lit up when any individual looked at pictures of their ex-partner as when experiencing physical pain. So, if his brain was wired to pay special attention to this experience, then so would I (momentarily).

But this special attention also made me realize that he was not as dangerous as he initially led on. He was just another sheep in wolf's clothing, with the occasional coat of black nail polish.