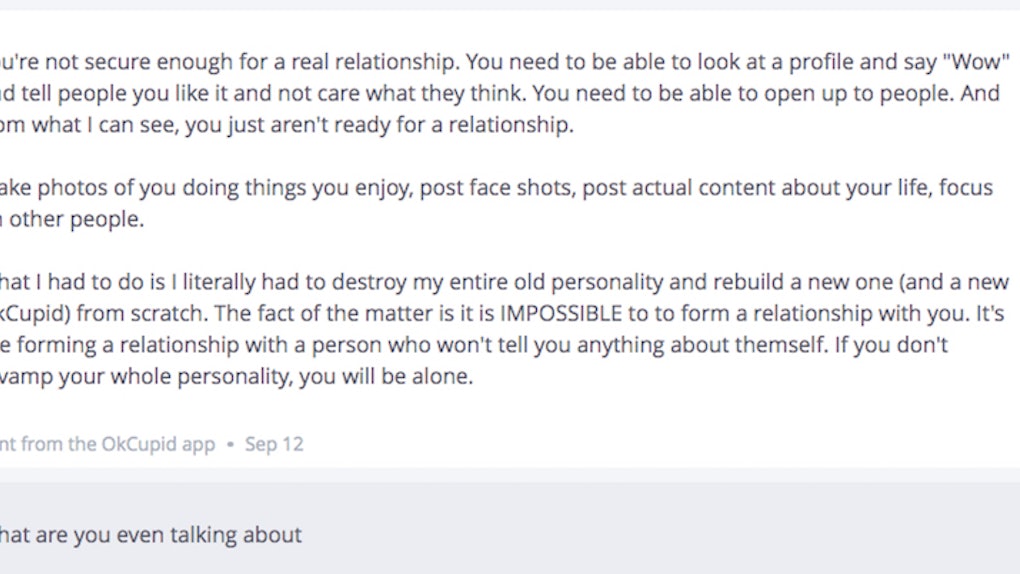 Guys On Dating Apps Insult Me As A Way To Flirt With Me, So Negging Is Real AF

I'm a fuckboy magnet. What can I say? I attract the worst types of people.

As a girl, my online dating profiles get a lot of traffic. I can't really complain about the quantity of matches or messages I receive (even though 90 percent of them are just "heyyy wut up?").

But over the years, I've gotten some weird ass guys who just start insulting me immediately if I either a) don't reply, b) take too long to reply or c) don't worship the ground they walk on just for shooting me a message.

It's kind of like when a guy on the street catcalls you, and you don't say anything back so he screams out "Whateva, bitch, you ugly anyway!"

This, ladies, is called negging.

Low-grade insults meant to undermine the self-confidence of a woman so she might be more vulnerable to your advances.

While doing more research on the term, I found this gem from a website called Seduction Science:

Yeah, this is not an article on The Onion. This is a real suggestion on a real website.

Do you see that first example?!

Let's review some others:

I would give you more of these amazing pick-up lines, but the best part of this? You have to actually pay to read the rest of the article.

I think I feel sick.

I'm not knocking online dating, though. I actually prefer it. It helps me weed out people with ease, and I just have more choices online than in real life. So I do take it kind of seriously.

(If you're reading this and you think we could be soulmates, my DMs are wide open.)

(That could be you, but you playin'.)

But I don't always have good luck. Just like in the real world, there are shitty guys online who also like to neg. Sadly, a computer screen doesn't mask a terrible personality.

About a month ago, I started talking to this guy on OkCupid. He seemed really nice and attentive. He was moving to New York from Florida and wanted to know more about why I loved living here so much.

But when I was in class for a few hours and couldn't get back to him, he sent me this:

People can come across in a way they don't mean to online, so I like to give everyone the benefit of the doubt. I, too, have offended some guys for being ~too sarcastic~ on apps or through text.

But when he was unapologetic and untruthful when he said "I was talking about myself," I knew this was some next-level negging bullshit I could not deal with.

You don't tell someone they're going to be alone if they don't revamp their whole personality, then turn around and say you're talking about yourself.

So, I ignored him.

And not even an hour later, he asks me to tell him a story about myself?! Fool, if you wanted to know a story, you could follow me on Snapchat.

That first guy wasn't the first person to neg me online. Ten days later, I got another one. (Got me feelin' like Meek Mill gettin' negged back-to-back.)

Check out our exchange:

OK, maybe it wasn't clear that I was joking in my first response, but obviously you didn't know I was referencing Kanye's song and you must be really insecure to call a girl boring for not replying to you within a few hours.

Why do guys think they can treat girls like shit and get away with it? Do girls actually fall for this? Because this shit sure as hell WILL NOT fly with me.

I won't quit online dating just because guys are too socially inept to keep a conversation. As my "mentor" Kanye would say: "N-now that don't kill me, can only make me stronger."