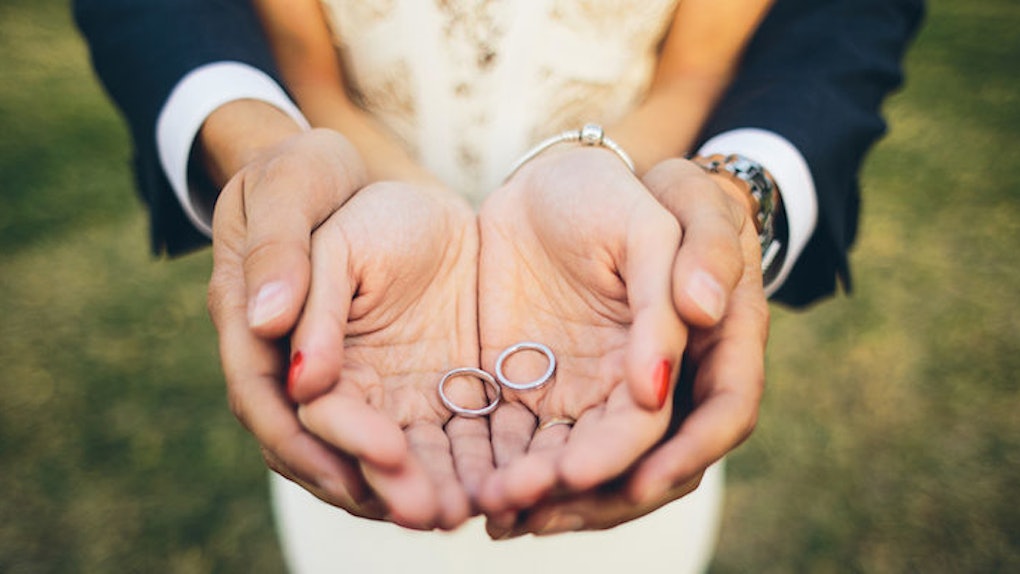 Millennial Men And Women Get Real About Their Feelings Toward Marriage

I am not married. I am not anywhere near getting married. In fact, the thought of being married anytime soon puts a disgusting pit in my stomach. My palms start to get clammy and my heart starts doing that fast, anxious beat, and I just hate everything about it.

But I do want to get married SOMEDAY. And I think about that day pretty often -- and in a pretty large amount of detail.

Am I a freak? Am I the only one who thinks about this stuff? Well, I know that's not true, because my friends think about it too.

So are we ALL freaks? Are all girls thinking about this stuff? And what about guys? Do they have these thoughts? Do they even WANT to get married?

I wanted to find out. I surveyed 101 millennials (50 males, 51 females) to see what it is we are all thinking when it comes to the M word. And it turns out we're not so different after all.

Is marriage even something we want?

So don't worry about how lame your cynical friends make you feel. If marriage is something you want, you are definitely not alone.

Furthermore, 69 percent of females revealed that the possibility of never getting married worries them.

I mean, I guess I also wouldn't be worried if 94 percent of my potential love interests were absolutely looking to get married...

When do we want to get married?

We all agree that we want to get married. But when do we want it to happen?

Most men (63 percent) and women (51 percent) agreed they would like to be dating someone for three to four years before getting engaged, and they’d rather get engaged closer to the three-year mark (four is too long).

Remember ladies and gents, that diamond on your ring may be forever, but your engagement apparently is not.

Do we care about what our parents think?

Like, sure, I hated Big, but I was dying to know what Carrie's dad thought of him. Didn't he care? Did Carrie even have a dad?? I had no idea!

It turns out I'm not the only one who finds this weird. The large majority of both men (64 percent) and women (76 percent) in the survey agreed that parental approval on both sides matters a lot to them when it comes to who they marry.

What are our thoughts on changing last names?

I would try to expand upon this myself, but Elite Daily writer Gigi Engle did an excellent job capturing the conundrum as she wrote:

I'm down to change it unless his last name sucks. Like my current (hopefully my future husband) boyfriend's last name: Fishbein. He will be taking my last name, or the SOB can keep his and I'll keep mine, and the children take my last name. Gigi Fishbein? Fuck that.

These sentiments were echoed by respondents such as Natalie, 22, who explained:

It depends on the last name I would be getting. If my future husband has a lame last name, I can definitely see myself keeping my last name or hyphenating.

The remaining male respondents were split between wanting their future wives to do whatever they want regarding the last name change (26 percent) and other (14 percent).

Michael, 23, said he’d like her to “but it’s not a deal breaker.” His sentiments were closely echoed by lots of other men, including Timmy, 21, who explains: "I want her to, but she should do whatever she wants."

The point is that, even if it's not the end of the world, it seems like your man wants you to change your last name.

Do we want kids?

We want kids. We want kids BAD. In fact, the large majority of all respondents (82 percent of men and 88 percent of women) admitted that a partner's not being open to having kids would absolutely affect their decision to marry.

Lucky for them, it seems like odds of meeting someone with that particular preference are slim.

But for the rest who would like to be married, the most popular choice was over a year into the marriage (47 percent of males and 51 percent of females said). Thirty-one percent of men and 27 percent of women said two or more years was sufficient.

Is anyone saving sex before marriage anymore?

Play on playaz! And cheers to wanting both sex and love.