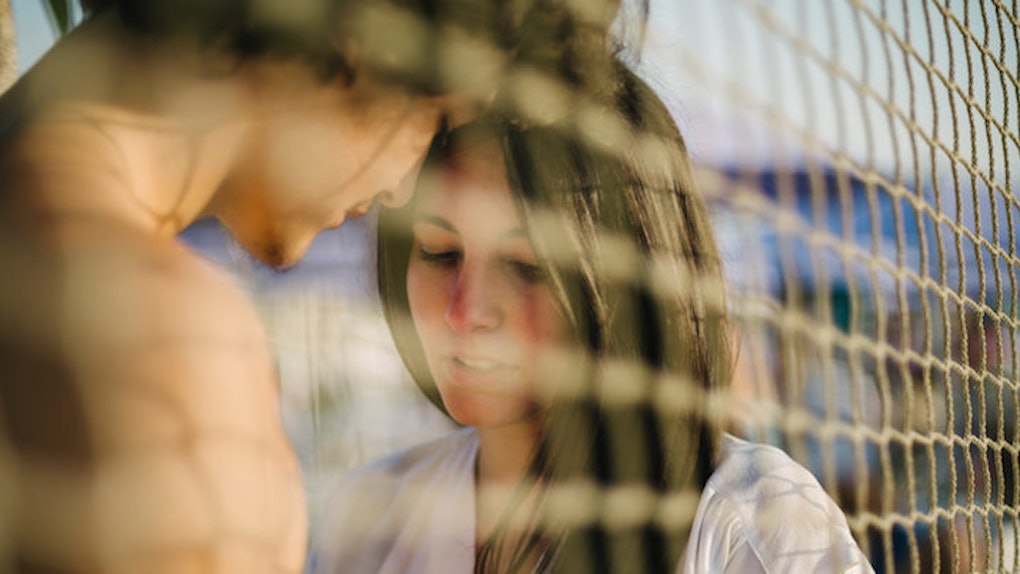 It was a brisk Sunday morning, and spring was on the horizon. The sun peeked through the curtains just enough to wake me from my drunken slumber, and I opened my eyes to find my then-boyfriend face down on the floor and naked.

I was hungover. But more than that, I was perplexed. In my efforts to figure out why my lover was kissing the carpet, I confronted him. He told me he'd had a little too much to drink (duh, dumbass), and then came the kicker.

He was an alcoholic.

This caught me off-guard, to say the least. He seemed to know he had a problem, but his unwillingness to take action unsettled me.

After taking a deep breath to center myself, I decided to end it with him. It was too hard to give my heart to someone who didn't want to be responsible for himself.

Long after our breakup, I found myself wondering how the hell I'd chosen such damaged goods. I drove myself mad over it.

And then I considered my history. I realized I had a habit of knocking on the wrong door. Patterns emerged. The alcoholic wasn't the first person I'd dated who had poor decision-making skills.

F*ck, I thought. I’m really good at picking people who are really bad for me.

The moments I had post-breakup were revelatory. I reasoned that there just had to be something wrong with me for having chosen such, um, interesting lovers.

Since I couldn't pinpoint my most fatal flaw, I spoke to my coworkers about what it could be. What made me reach for these "damaged" men? We came to a conclusion.

Folks, I have a confession to make, and it isn’t pretty. Here it goes: My name is Sheena. I am addicted to fixing people (I am also fully aware this is not anonymous).

I forgive fatal flaws. I see beauty in the bad. I surround myself with imperfect company and work tirelessly and passionately on the people I care about. But I forget to improve myself.

I am working on attracting better energy. And to do this, I must first emit the energy that I want to welcome.

Dating should not be a distraction.

Dating distracts me from myself.

This is probably because meeting with other people keeps me from spending too much time with my own thoughts, which I know, deep down, are works-in-progress.

Sitting with my musings and molding them from "blobs" to "fab" is a daunting task. I shy away from it far too often. I'd rather take the spotlight off me and put it on a man.

There's a major problem with doing this. I get lost in my love for a man, and I eventually lose sight of who I am.

You can't change other people, but you can change yourself.

My ex struggled with an addiction I know hardly anything about. I watched him suffer in the dark. Sure, I've experienced waves of darkness in my life, but they had a different shade.

So I tried to turn him into the man I thought he could be -- the man I wanted him to be. I was convinced I was Superwoman, that the power rested in my hands and that I could puppeteer him, then steer him in the right direction. But I learned the hard way that my efforts were futile.

The truth is, you can’t alter someone to fit your own needs and desires. My ex offered me all he had.

People will change only if they really want to change. And I hate to break it to you, but people probably won't change for you. They'll change for themselves, because they can't handle the pressure that crushes them at rock bottom.

I need to stop believing that, if I have the ability to change someone else, there's hope for me, too. And after enough romantic mishaps, I need to work on my own needs -- my own confidence. To help others, I need to first help myself.

Know that it’s okay to be drawn to creative people.

Smarts don’t sprout from boredom; they're born from bad experiences.

Smart people have a lot of baggage because they've often been through sh*t. It's no coincidence that some of the biggest geniuses you've ever met are also sort of crazy. The struggle is real.

What can I say? I’m a sucker for "damaged" men. They're raw. They're real. They tell it like it is and come with a "no bullsh*t" policy. But they're also absolutely horrible for me.

If you’re anything like me, remember this: Damage can look sexy, but you need to focus on yourself, too.

One day, you'll find someone who is right for you. Until that day, learn to love only yourself.