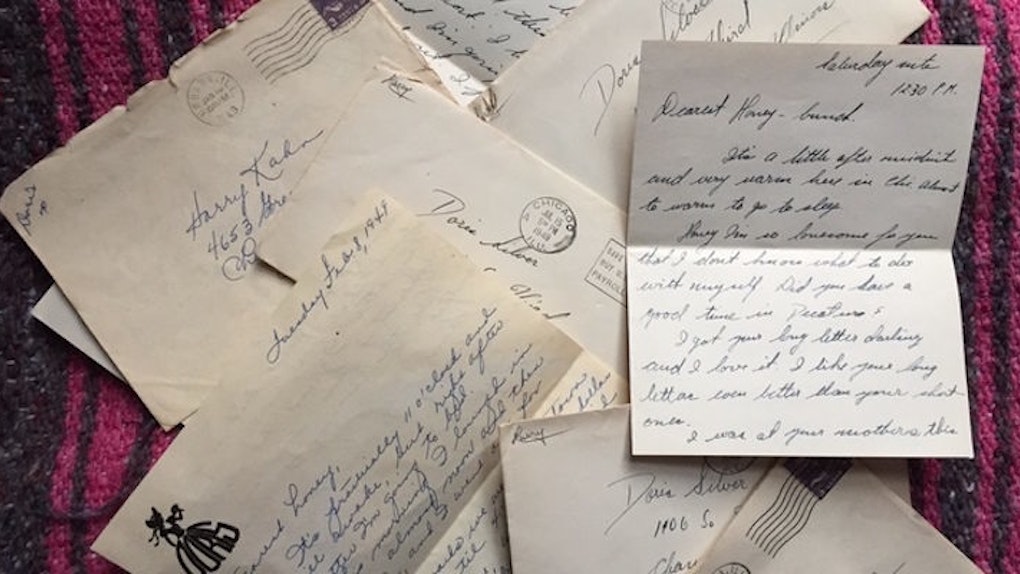 I'm really scared of fire. Not just the physical danger of being in a burning building, but of the potential destruction of my life, as told in possessions.

That might sound shallow, but I can back it up. I'm a bit of a prepper. If I can prepare for disastrous, albeit rare eventualities, I will. I have a mental plan prepared for what happens if my building catches fire while I'm in it. There's a large bag waiting and two things will get tossed in it on my way to the fire escape: The cat and the letters.

I was always going to talk about my grandparents' love letters. It's a pretty personal topic to write down, but they've played such a role in my single life that they deserve some stage time. In some ways, they're the biggest difference between the modern dating world as it is and as I'd like it to be. As we put emphasis on shorter, faster, instant, I worry that we're also eliminating words you can't, in my opinion, build a relationship without -- thought and effort.

When I was 14, I found a box of old letters in my grandmother's garage. She blushed when I asked her about them. There were two sets of letters. One written by my grandfather, addressed to my grandmother and another set the other way around. Every postmark was from the mid to late-1940s and they were bundled with satin ribbon.

Immediately, I knew they were treasure. It was not unlike discovering a million dollars buried at the bottom of my laundry basket. Grama didn't feel that way.

“You can have them when I'm dead.”

Horrified, I shoved them back on the shelf where they came from and forgot about them, far more content to have a grandmother than the written history of one. But I was fascinated. I have always loved letters, postcards, anything that requires a postmark.

I blame two things: First, a lifetime of sleepaway summer camp where getting lots of mail meant you were popular, a loved child and not one sent away so as not to be a nuisance during cocktail hour at the country club. And second, my mother's military-like programming of her children to write thank-you notes upon the receipt of a gift of any kind. I wrote 350 thank-you notes after my Bat Mitzvah. My wrist still hurts.

But now, as an adult, I crave handwritten communication. I still write letters, send cards. When I can't focus at work I send people mail. I have a small circle of friends that receive mail from me. A smaller circle still who write back.

I think it's important that we give the postal service our business. Capital One Card applications can't have all the fun. It's basically just catalogs from my apartment's previous occupant and horrible news from the student loan people in there.

When's the last time you got something in the mail you weren't terrified to open? Isn't that a shame? I approach most of my mail like it's going to ruin my life. But overall I am a big fan of written correspondence.

Now the box of love letters is mine. Well, mostly mine. Not long after my grandmother passed away, I removed a set of letters from the box, the only letters that matched up in time. In them, my grandparents are planning their wedding. I gave these to my mother and kept the rest.

My grandmother was in college, on her way to becoming a special education teacher. My grandfather was in the army. They told each other the most mundane details of their days, maybe a remark or two about the next time they'd see each other. They talked about the friends they spent time with, events they attended, professional concerns or accomplishments. They couldn't see each other every day. Weeks would go by without any time spent together at all.

There are postmarks from three different years; they did this for a while. There was no FaceTime, long-distance phone calls were expensive. Instagram didn't provide a window into their lives, they literally never saw what the other one was eating for dinner. That constant communication we thrive on didn't exist back then. All they had was mail. Knowing how excited I am to receive a text message, I can't imagine how happy my grandmother must have been to get a letter. Of course I can guess, because then she saved it for 50 years.

My favorite letter is one from my grandfather to my grandmother that is 10 pages long, very widely spaced and talks about basically nothing at all. Apparently my grandmother was less than impressed by the average length of my grandfather's letters to her and his response was quite the statement. He challenged her to beat it, but her response isn't in the box. More than anything I think they wrote letters just to stay connected to each other. You can tell how disappointed they are if the letters ever skip a day.

Sometimes we (myself included) make fun of the text-based relationship reality. A full argument accomplished via text will be criticized as one that should have taken place in person. As if we shouldn't be connecting ourselves to other people through words. The letters make me think just the opposite. A relationship can be strengthened by words. You can accomplish things together without being in the same room. Plans can be made, love expressed. But I guess it really comes down to your idea of romance.

If my grandparents were writing each other letters every day during their courtship (I love that word), that means that at some point every day, they were thinking about each other. That they were physically doing something designed solely to please the other person, to make the other person happy during mail call. They were acquiring stationery, stamps. They were handwriting their thoughts onto paper, proofreading their work, sealing the letter and walking it to a mailbox. They weren't just thumbing down a message, leaving all grammatical accuracy up to the whims of autocorrect. I think romance is determined by its weight in thought and effort and text messages weigh nothing at all. All we have to do is remember to charge our phones. Impressive.

Which would you rather receive: A text message from your partner that says “I love you” or a handwritten letter delivered to your office, saying the same thing? One will make you exponentially happier than the other. The message is exactly the same, but one speaks so much louder. It shows thought and effort and it wasn't the easiest path of communication. It was harder than picking up the gadget that's never more than three inches away from us.

The letter took more thought, it was motivated by how happy the person on the receiving end would be. It wasn't just a commonplace message that appeared three lines above the items you needed him to pick up for you at the grocery store.

My grandparents didn't have a perfect marriage, if there is such a thing, but they did have a real one. I'm not sure if the phrase “till death do us part” came up during their Jewish wedding ceremony, but that is literally what happened.

Sometimes I wonder if my grandparents' perspective, their lack of the effortless conveniences that modern life has given us, gave them a better shot. I wonder if people of their generation divorced less often than generations after them because of the way they grew up, the way they fell in love with each other. Everything took more effort. I wonder if life hasn't made things too easy for our generation, to the point where we have a different sense of the value of intangible things.

My grandparents met at a soccer banquet. I will most likely see my husband's face for the first time while I'm sitting on the toilet.

I always wonder what my grandmother would think if she knew that I was using app dating. If she'd ever known what it was at all. I wonder if she wouldn't have wished something else for me, something better. And then I remember what I think about effort.

I won't stay in a bad relationship because I'm scared of being single again. I'm in it now and I like to think I have a knack for slaying this single shit. This doesn't scare me. But now that I know how difficult and how rare it is to find someone I could actually be with, I will certainly put more thought and effort into keeping my next real relationship healthy. Into keeping it real.

I have no idea whether or not my effort will work, but it will exist with the best intentions. We're not compatible with everyone. Love and attachment, friendship and companionship are really rare finds and once I've got them, I will never doubt their worth. I may never have the chance to be married to someone for 50 years, but I know I deserve a partnership that thinks it'll put in that kind of time.

I think we have to write letters. I think we have to create something tangible to pass on. Which would you rather receive: Your grandparents' old iPhones with their text history or a box of letters from when they were dating? That's the thing about effort. It lasts.

“I will hug and kiss you all to pieces my dear when we're together. All to pieces.” -- a letter written to Doris Silver, by Harry Kahn, on June 30, 1949. Seven months before they were married and 33 years to the day before the birth of their granddaughter, Shani.