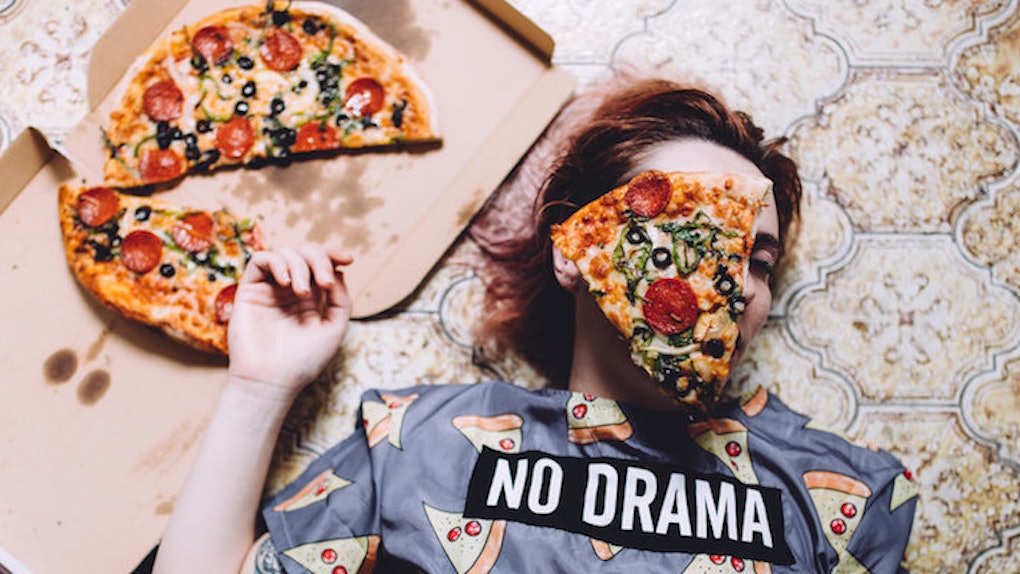 How To Avoid 'Junk Thoughts' When Dealing With Your Breakup

I recently suffered a not-so-serious breakup with a guy who was not-so-technically my boyfriend.

Let's call him "Jay". He was a hangout, a hookup and a half-assed friend with half-hearted benefits. Nevertheless, I sobbed inconsolably when it was over, and then quickly turned to binge eating. I'm not talking about Banana-Stuffed French Toast (though I indulged in my fair share of that, too).

The breakup lead to me stuffing myself with junk; not junk food, but junk thoughts instead. Equally unhealthy, un-filling, and unable to nourish me the way my mind, body and soul need to be nourished after a breakup.

There are several kinds of junk thoughts that I unconsciously snack on -- particularly when I'm sitting in traffic or mindlessly scrolling through Facebook. I'm sharing them now because they are the cheapest, and easiest way, to binge on the substances that slowly destroy us.

It was actually me who initiated the breakup with Jay, but only because my non-boyfriend didn't care much about me. I know this to be true for many reasons, one being how well he took it when I told him it was over.

For weeks following the breakup I chewed aggressively on this notion that I didn't like Jay either, and I didn't care about him. It made me feel more in control. I was protecting my ego by telling myself that the “situationship” was DOA, destined to not work out because of a mutual disinterest.

It was the kind of junk I devoured quickly, and ultimately always found myself at the bottom of something empty and salty. This particular junk thought is often accompanied by forcefully choking back your own hurt. It's sometimes known as denial, the idea that what you couldn't have, you didn't want anyway.

It's taken me a long time to learn that my ego is not the part of myself worth protecting. The ego is fed by the approval or dismissal of something external, and what we really want to preserve is the light inside ourselves that is immune to the criticisms of others.

So, when I find myself snacking this way, I like to try to fill in this blank: “Admit it, _______.” I'll admit it, I liked Jay a little. Admitting anything is a total palette cleanser. Honesty creates a space for all feelings, good and bad, to be examined.

When I used to talk to friends about Jay, I made sure to provide a colorful and detailed account of everything wrong with him: his self-centered talking points, his failure to appreciate or see me and the stupid life decisions that led to him adopting a dog he couldn't afford.

I'd footnote every lament about losing him with a reminder of one of his shortcomings. The one time he slept through hanging out with me? He was either too dumb, too spacey or too egotistical to be taken seriously.

It was as if to convince myself, “See? It would never have lasted between us.” This kind of junk thought was as unsatisfying as it was delicious.

But, why paint a picture of someone who isn't cool to date? A disappointing portrait of him is really a reflection of disappointment in myself.

Breaking up was the smart part. It's important to notice toxicity when you're still linked to someone, but after that, open your mind to the possibility that the experience might have been something you needed in order to grow.

Support from friends is crucial during a breakup, but we all know our loved ones serve up the biggest portions of junk thoughts. It's not intentional or malicious; it's what they know how to do. Who doesn't love devouring something cheesy (both literally and metaphorically) when they're feeling down?

Sympathy and encouraging words from friends are one thing, but partner bashing is kind of like taking a diet pill. Something outside of you does all the work of making sure you don't blow up, but at the end of the day you aren't any healthier.

For 10 minutes you just need to hear how amazing you are and how dumb your ex is for letting you go. My best advice for circumventing a hotbed of negativity is to go out with your friends, maybe eat some real junk and talk about what you learned.

When I finally caught on to the amount of junk I'd been packing in after my breakup, I realized how lethargic and self-damaging I'd become. Taking a break from junk thoughts was like putting ice on the bruise he'd left behind.

Not all relationships will end so tidily. Sometimes you'll be left with something more like an open wound, but my conclusion is still this: It's okay to be sad, it's a little pointless to be angry and to be in love with yourself is the healthiest way to binge.