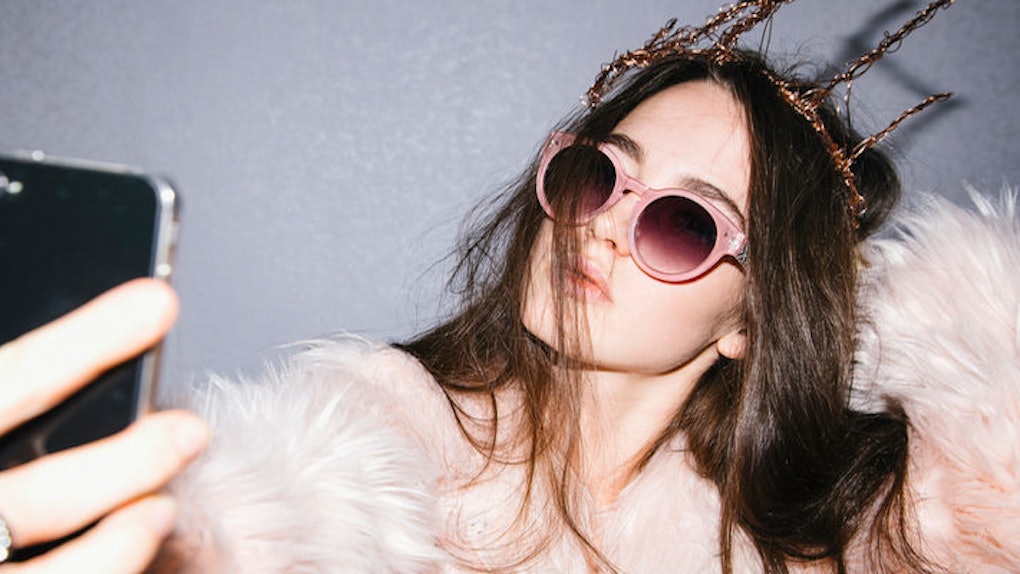 I'm going to really throw myself under the bus here because, you know what? I'm feeling a little bit wasted off my $13 green juice (all those B vitamins will really fuck a girl UP). And I'm JUST A WOMAN WHO DOESN'T WANT TO HOLD BACK WHEN SHE'S INTOXICATED, OK? Just let me live!

Plus I strive to embarrass myself as much as humanely possible because I want you, my gorgeous, innocent, kittens ferociously reading this article, to feel a little less alone in this cruel, cold world.

Here are just two examples of me in my shining glory:

While the above pictures detailing my drunkenness are nothing to write home about, they're not nearly as embarrassing as what I'm about to talk about.

I've done some acute research about potential suitors, new girlfriends, long-term partners and Tinder dates I haven't even met yet that is deeply, deeply humiliating in retrospect. So humiliating it physically hurts my poor little manicured fingers to even type it all out.

I can't tell you how many precious, golden, hours I've lost to my life spiraling down the dark Instagram rabbit hole. I'll never get those hours back. I could've been writing my novel, but no. I've just seethed with jealousy for nine hours in a social media k-hole.

You know how it starts: You're innocently checking out your new bae's Instagram feed, batting your lashes like Queen Innocence herself, when BAM, CRASH, BOOM — you're 135 weeks deep into their profile.

An ex-girlfriend pops up in the pictures and before you know it, smoke is coming out of your ears, you're seeing candy apple red and you're no longer a human being, but rather a vile monster with no self-control.

Once you open up the social media stalking door, it's hard to go back. You won't be able to stop yourself from having a bit of a peak at least twice a month. This is why I cut this habit cold turkey (best thing I ever did, besides quit black-out drinking, cigarettes and diet pills).

But I will promise you this: Almost every time you stalk your partner on Instagram, see who they're liking, highjack their phone and see who they DM'd, see whose photos they're commenting on, etc., you will almost always see something you don't want to see, babes.

The whole charade is hard as hell to navigate. Cheating used to be smelling another woman's perfume on your partner, but now the lines are so blurred in this digital world we live in.

In fact, I know too many coupled-up peoples who are having too real affairs through Facebook messenger. So here's what is NOT OK (aka goes into the emotional cheating territory, which we all know is way WORSE) to do on Instagram:

1. Don't "like" a slew of pictures of an 18-year-old girl naked when you're in a relationship, UNLESS you know her. You can look at her and get turned on (CREEP, SHE'S 18), but you don't need to click "LIKE" on it (unless she's a friend and you're trying to support her modeling career).

2. Don't "like" provocative pictures of your ex-girlfriend or boyfriend. It's disrespectful to your new partner.

3. DO NOT DM ANOTHER PERSON YOU THINK IS CUTE AND ASK THEM WHAT THEY'RE DOING THIS WEEKEND.

4. Don't post #TBT's with your ex. If you don't already know that's inappropriate, you're dumb.

5. Don't engage in a public comment flirtation with an old flame. It's humiliating to the person you're with. If you want to reconnect with an old flame on a flirtatious level, get the hell out of your relationship.

6. Don't get mad at your partner for looking sexy on her Instagram. Be proud to have such a sexy girlfriend and be SURE to like the hell out of her pictures (and even respond with flames or hearts).

7. Don't be one of those dick wads who refuses to post a picture of their significant other on social media because you want to appear single to the world. It makes it clear you need attention, validation and you want to have your cake and eat it, too. I used to be like this, and now that I'm a changed woman, my relationships are oh so much better.

8. Don't force your SO to post a picture with you on Instagram. Let them do it in their own time. And if they don't naturally want to do it by month four, calmly tell them it hurts your feelings.

9. Remember it is THEIR SOCIAL MEDIA account, and you don't get to tell them what to or what not to post. If you don't like something they've done, calmly explain why it bothered you. But don't ever, ever, ever act like you have creative control over their personal social outlet.

10. Don't get all passive aggressive/crazy and go "liking" old pictures of your new bae's ex. I get that you're trying to let her know you're NOT GOING ANYWHERE, but really you just look like a crazy bitch with too much time on her hands.

11. Don't ever, ever, ever publicly berate your partner on social media. There's a special place in hell for couples who air their dirty laundry with their partner on PUBLIC forums. I have two words: Grow. Up.

12. It's just not necessary to serial like another girl's pictures (like, 30 in a row) when you're in a relationship with someone else. Hold yourself back, baby.

13. DON'T GET MAD OVER OLD PICTURES YOUR SO TOOK FIVE YEARS AGO WHEN THEY WERE IN A DIFFERENT PLACE IN THEIR LIVES.

14. Don't embark on an Instagram affair where you fall in love via social media with a fantasy of a person. It will ruin the real relationship you're in.

15. DON'T TAKE IT ALL SO SERIOUSLY. If she forgot to like one picture you posted, don't take it personally. Realize she has a fully-realized life and probably just missed it.

16. Don't pay more attention to how your relationship looks on social media over how you are in real life.