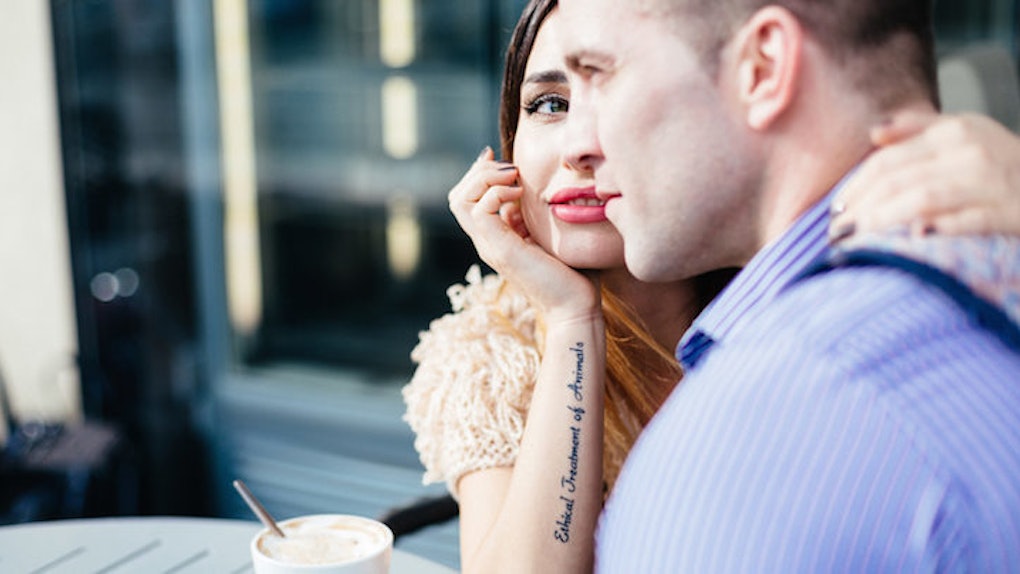 The summer I worked as a bartender was the most eventful of my life. On one hot, sticky July day, a customer walked in and sat down. At the time, he was just a customer, but he would soon become my boyfriend.

An attentive listener and chivalrous guy, he made for a good boyfriend. On dinner dates, he'd nurse even my craziest ideas. He’d soak up my ramblings and take them in, hanging on my every word -- even when what I had to say hardly made sense. He'd carved a special place for me in his heart.

But I didn't carve a place in mine for him. He was everything I was supposed to want -- everything I always thought I needed. And yet, when standing face to face with the real thing, it felt anything but right.

He was given to me on a silver platter -- er, a wooden bar -- and though I had him in my hands, I couldn’t feel the weight in my palms.

I've always enjoyed the idea of having a partner to do things with. In my mind, having a companion was a dream come true. In practice, it wasn't.

In real life, I'm irritable and reckless; I'm wishful and impractical. It is inevitable that the men I date will also be flawed. They will fall short of my hopes.

After I broke up with that boyfriend, I decided to take a good look at my life. On closer examination, I realized I entered a relationship at a time when I should have been focusing on myself.

During the relationship, I'd felt surges of loneliness when I was doing mundane things without him -- whether that meant cooking laundry or making dinner for a party of one. I should have been learning to embrace these moments of solitude.

I am not proud of my revelation, but it needed to come to light. Though I loved the idea of having a boyfriend, I wasn't ready for one. And breakups happen when you want someone for the wrong reasons.

I want only the good parts of a relationship.

I’ve been out of the game for a long time. And when that happens, you start thinking that all of the coupled-up folks you know are leading infinitely better lives than you.

I need to remember that they deal with the good, the bad and the ugly.

We see our friends in their best moments, and they talk only about the good parts of their lives. I have my own problems, and it's been a while since I've taken on a someone else's.

My idea of the future is a glorified version of my past.

When I consider my past relationships, I don't remember my mistakes. I see only the best parts of what we shared, making me believe the same good feelings will reappear into my future relationships. Retrospect brings us disillusionment, and it's dangerous.

Have you ever wondered why you shudder in disdain at the sight of a couple holding hands, eating off each other’s plates, and doing all that other sickeningly mushy, lovey-dovey stuff?

The reason you want to gag is because you’re hella jealous. You remember doing those things with your ex and think, I want those things for myself, damn it.

But then there are the pebbled paths and the steep inclines. They line the roads that lead to happiness. We don't talk about them, but they're just as important as the moments we do talk about.

When you’re with someone, you’re no longer your main focus. You have another set of needs to consider. But it's harder for you than most people to take his feelings into account. Patience is a virtue, and I hardly have any.

I’m a princess. I like to get more than I know how to give. What can I say?

I want to prepare for my future, but I can’t always appreciate you in the moment.

Society tells us we’ve got to lock someone down if we ever want to feel something. It tricks me into thinking my priority is to be with someone. In reality, being with someone is the last thing I need.

Future Boyfriend, know that my intentions were good when we started this thing. I just might not be able to follow through.

The man I choose will never live up to the man in my head.

If I keep my expectations to myself, I’ll never be disappointed. When a boyfriend and I talk about our expectations for the relationship, we usually discover that we have different opinions. Fantasy is always better than reality.

A person has limits, but my imagination is limitless.

The honeymoon phase is my favorite part.

Lust is both my trustiest ally and my biggest enemy. When it’s there for me to indulge in, it gets me high. But when it dissipates, I'm sore from losing it.

The problem with the pure ecstasy of lust is that it eventually wears off, and you’re left with the day-in, day-out concerns of the relationship. The monotonous routine.

I’m no fool; I know the too-good-to-be-true moments melt away and leave mediocrity in their place. And because nothing good seems to last, I'd rather take a chance on infinite daydreaming.

At least in my dreams, the honeymoon is forever.