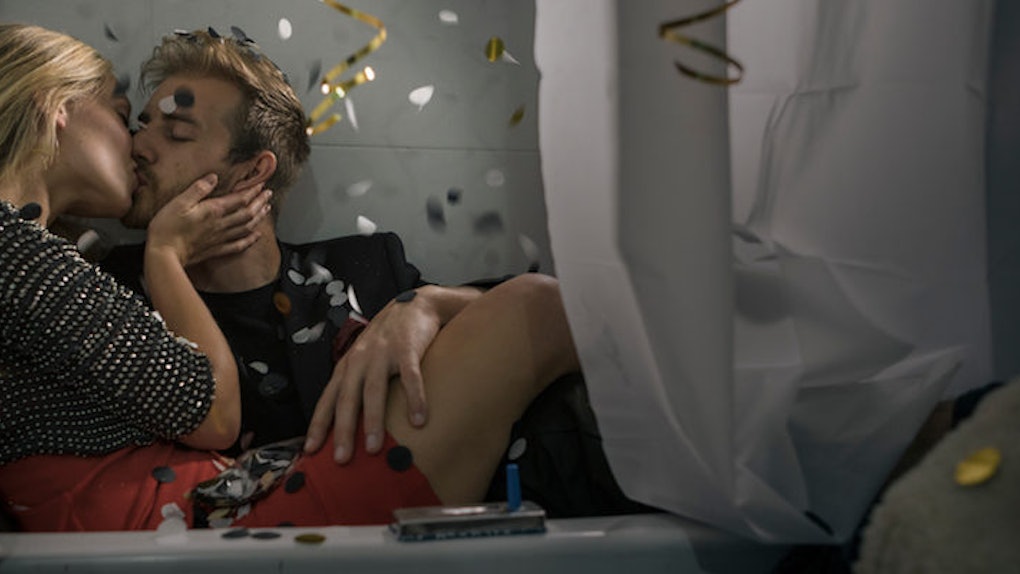 On New Year's Eve, right before the ball dropped and it became 2016, I kissed a guy, and I regret it.

It's not so much that I regret the kiss itself or the guy it was with, but I regret the expectations I had when that kiss turned into something more. Usually, those midnight kisses end as quickly as they begin and I never have to see the guy again.

Unfortunately, that wasn't the case that New Year's Eve.

At the end of December 2015, I was in California visiting my brother and his fiancée. It was a week filled with endless third-wheeling, and NYE was no exception.

I tagged along with the happy couple to my brother's friend's party. My only expectation that night was to get drunk.

For me, 2015 had ended on a low note, so I was so excited for the changes I hoped 2016 would bring (mostly in the love department). I was finally ready to be single and to stop dating the wrong guys at the wrong time.

In fact, the morning of New Year's Eve, I deleted my dating apps and all the old texts from my ex. I was so ready to say goodbye to all of the bad things that had happened.

I walked into that party ready to put the past behind me and never look back, and of course, that's when I met him. Within the first five minutes, I had my eyes set on him, and within the first hour we both knew we would be each other's midnight kisses.

The flirting began innocently enough: During a game of beer pong, he kept tickling me to distract me and make me miss my shots. It worked, but I wasn't complaining. I was really enjoying the progression of the night.

We were inseparable the whole party. While I went into the night worried I would be surrounded by annoyingly affectionate couples, he and I were the ones who packed on the PDA hours before the clock actually struck midnight.

When the countdown began, he was standing next to me, and I was truly happy to have someone to kiss at midnight. Even though we'd been kissing all night, everyone knows it's the midnight kiss that really matters on NYE.

There's something so refreshing and exciting about starting off the new year by sealing it with a kiss, especially when that kiss is with someone whose name you might not even know.

Fast forward 12 months later, and everything is different. I wish I hadn't kissed him then because now that we're broken up, all I keep thinking about is that night we met. Thanks to that memory, I wasn't even looking forward to this New Year's Eve.

I keep reliving every single detail from that night, wondering how we could go from what we were to not even talking. My year started with high hopes and it ended with crushing disappointment and bitterness about how everything turned out.

Meeting him that night made me so excited for 2016, but after the breakup, I was so beyond ready for that year to be over.

I'm angry too, because I should be so happy about the things I've accomplished in 2016: I graduated from college, moved to New York City and landed a job at a successful women's magazine.

I overcame so many obstacles and I learned so much about myself, but all I can think about now is how the very beginning of that year started with a kiss without any expectations and then ended with me being in love with someone who doesn't even bother to respond to my texts or calls.

So this year, I put on my party dress and forced myself to go out and enjoy New Year's Eve -- not because I wanted to, but because I owe it to myself to start off the new year without dwelling in the past.