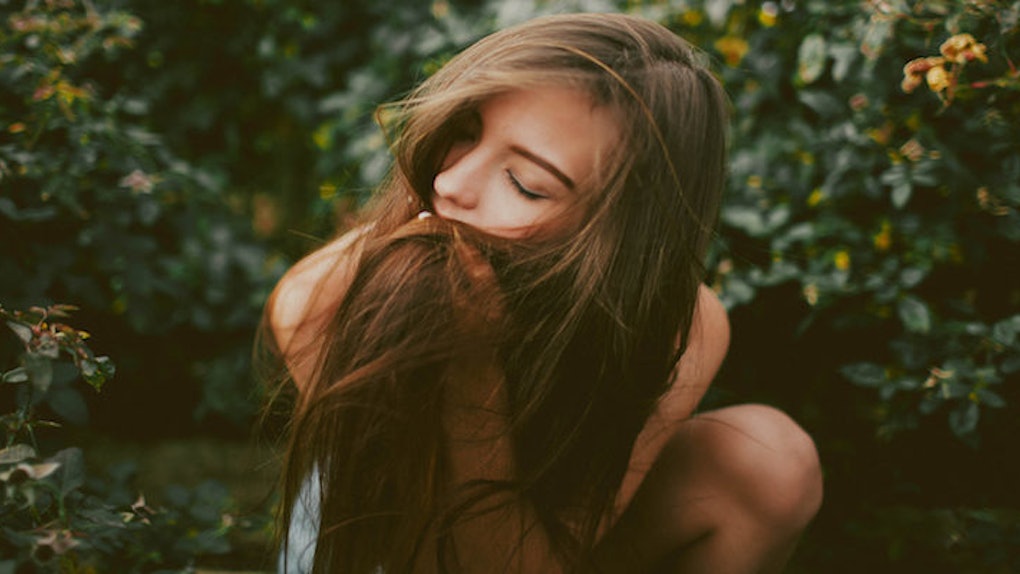 The Older I Get, The Less I Care About Finding 'The One'

When I was 20 years old, I was SURE that by the time I reached the tender, ready-to-settle-down age of 30, my delicate little ring finger would be adorned with a giant, fat, f*cking mega rock. Or, at least, a tiny snow-white sapphire. A sparkly token of engagement.

"Your 20s are about your career, and your 30s are about family!" my mother used to purr, swilling her champagne in her crystal stem glass. "I mean, darling, the day I turned 30, I BURNED my birth control pills."

Did my darling mother actually set fire to her birth control pills the morning of her 30th birthday? Nah. Mum has always had a knack for adding a glittery sprinkle of melodrama to her life story. She just stopped taking them because she was ready to breed.

And to my young, keen ears, 30 seemed like the perfect age to get married and start the breeding process. After all, it was so endlessly far away from my 20-year-old self.

"I don't want to get married YOUNG. Just, like, right before 30, you know?" I slurred to my best friend Ruba one night, throwing back a glass of cheap white wine.

"Oh yeah, me too, Z. We're totally on the SAME page!" Rubsies slurred back, lighting up two Marlboro 27s and handing me one (friendship at its finest).

I sucked back my stick of rat poison and nicotine and pondered the blissful future. "Let's get pregnant at the same time, too!"

We were both 20 and already in long-term relationships with “the one." What the f*ck did our sorry asses have to worry about? Our path was clear: We would party like beautiful messes for the next couple of years. And then, at 27, we would marry our spouses in a badass, typical New York place, like the Chelsea f*cking Piers, and by 30, we would be preggo at THE SAME EXACT TIME. End of story. Sh*t was set.

Ha. The only problem: By 21, my relationship had fallen apart, as most young relationships do. (PSA: realizing you're a giant lesbian will really screw things up with your boyfriend.) And suddenly, I was a single kitten navigating the mean city streets solo.

Was I flooded with fear? Stricken by pangs of panic? Was I tossing and turning night after night, hot and bothered and twisted in Egyptian cotton sheets, stewing in a pool of my own sweat, certain I was destined to be ALONE forever and ever and ever?

Well, no. That's not my style (I had a healthy Ambien addiction that helped me sleep, after all). However, I had this underlying  anxiety lingering beneath the surface of my carefree f*ckgirl skin. And after a drink or five, I would light up a cig and confess to my friends: "What if I don't find the one? What if I'm single forever?”

All it takes is for ONE GIRL to drop her guard, and the rest of her crew will follow suit. Suddenly, all my super independent girlfriends spiraled down the vortex with me.

"I'm scared of that, too," tough, tattooed Lola* lamented to the group, twisting her newly dyed platinum hair around her fingers.

"Oh God, guys, what if we're single and alone by 30?! We don't want to end up like KATE*," Daisy* whimpered, referring to our 30-year-old friend who was couldn't make it past the third date without being ghosted.

We all took a moment of silence for sweet, single Kate. We solemnly took a sip of our whiskey sours and shared a look of solidarity.

Oh, that wouldn't be us. Kate was bonkers, and WE weren't bonkers. We were all decently pretty, and if we weren't whip-smart, we were at least impressively charming. PLUS we were still cute, young kittens, ripe for the plucking.

But our confidence was strictly surface. All it took was another whiskey sour, and the fear of being single at 30, like tragic Kate, would come back.

Well darlings, guess who is going to be turning 30 in six goddamn days?! ME. And guess who isn't even close to strutting down the aisle in a pageant-queen, virgin-white, poofy wedding gown? ME.

And guess who isn't freaked out in the slightest? You guessed right again: ME.

I used to think there was a lost, mystical woman out in the universe looking for me. We were going to lock eyes from across a crowded subway car, and something within both of us would just CLICK. And the sky would break open, and those gaping holes would suddenly be filled! With each other!

At some point, it did happen. Not the locking-eyes-in-the-subway part, but the love part.

I've been in love three times the past ten years. Each time, I thought it was forever. But the 20s are a wildcard: Someone would move or fall out of love or have a life crisis, and the relationship would end, and I would once again be consumed with FEAR that I would be alone forever. Black mascara tears streaming down my face, my big Bambi eyes cast downward in defeat.

But something shifted in the last year. It's like the dust has settled, and I'm starting to see the big picture. It's an overwhelming clarity so profound, it feels almost spiritual. (Have I mentioned that the older I get, the more ~New Age~ I've been getting? I know. I hate me, too).

But, God, I don't care about finding "the one" anymore.

I'm still wildly romantic to my core. I love love as much as the next hyper-passionate, big-hearted girl on the block. But I'm not in this dramatic, harried rush to find ~her~ anymore. The closer I get to breeching the big 3-0, the more I untether myself from deadlines.

So ... why? Is it because I don't want those things anymore?

Girl, no. I want a wife and demanding little kid creatures of my own more than ever. I've just started to trust that it's going to happen instead of being sick with fear that it's not. Because I've seen what's happened to the girls who freaked out about finding "the one" and having to get MARRIED by THIS DATE. And it's not pretty.

Look, sweet kittens, you get what you give. Emitting that fear-based, frenetic energy into the universe is dangerous. Desperation in general is dangerous (and wildly unattractive). Desperation, anxiety and fear surrounding love cause girls to do foolish things. Like settle for the wrong person. Or latch on to another anxious person that lives his or her life consumed by panic and deadlines.

And to be honest, I'm so, so, SO grateful I didn't find the person I was destined to marry in my 20s. I'm rich with gratitude over all the relationships I've had. Some hurt like hell. Some felt like I was being dosed with venom. Some were pure love, and some were pure lust.

I can't imagine my 20s being attached to just ONE person. I've experienced so much love and so much heartbreak that when I do meet the person I marry, I won't have regrets. Oh, I lived in this decade, baby. I f*cking lived.

And if my marriage crumbles, I know I'll be OK, too. After all if I've learned anything, it's that life can throw us some really unexpected, wild loops.

That being said, I've realized I'm all I really have anyway. People who you're certain will never leave you, sometimes do. People die. People cheat. People get sick. People fall out of love. You can't control any of that.

Don't ever invest your entire self and life purpose into another person. Invest all that emotional energy into yourself instead. You can never leave yourself. The relationship you have with yourself is the only relationship you'll be in for life.

Don't freak out about finding "the one." Because there is no such thing as "the one." You are "the one."

So stop panicking, my lovely girl, and start TRUSTING instead. It's all going to be better than fine. It's going to be amazing.