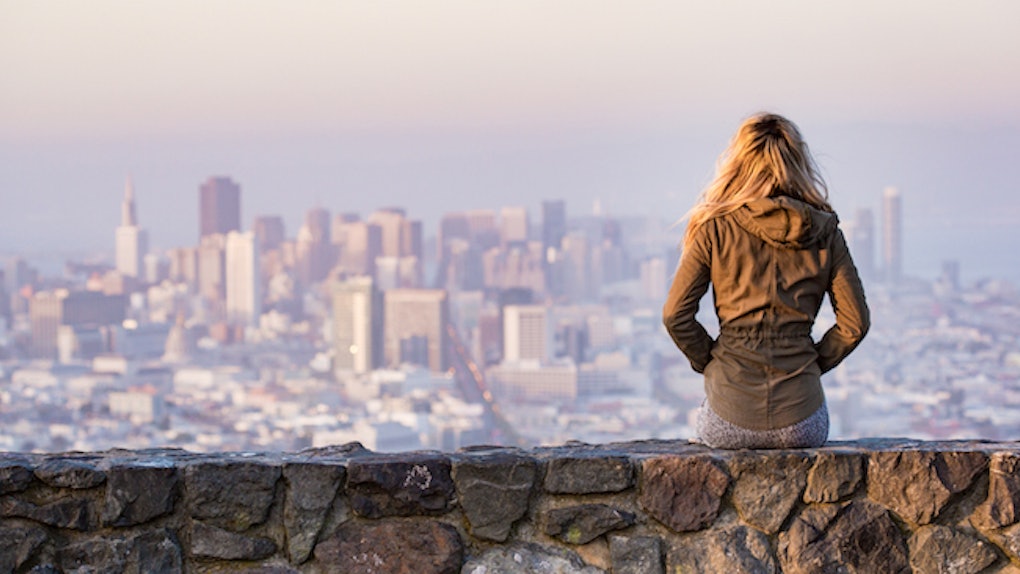 How To Let Go Of Someone You Love

When you are forcing yourself to fall out of love, it can feel like sawing off your own limb.

While that might sound a little extreme, I think it's pretty accurate. Breakups are super painful, especially when they come unexpectedly or right when you were smack-dab in the middle of the height of your feelings.

Even if the relationship has petered out into its natural end, that doesn't mean that love isn't still there. It's just doesn't have enough juice to keep things flowing.

When your heart is still firmly gripping onto another person, prying it loose is difficult work, and I still haven't found a pain-proof strategy that works. Like drunkenness, time is really the only thing that allows love to go.

But that hasn't stopped me from trying all kinds of ways to let go:

The last time my heart was broken, I dreamed about the person who smashed it into a million pieces almost every night. In the mornings, I would actually force myself to go back to sleep, so I might spend another few minutes with the figment of my imagination he had become.

Not only did this make me late for work a lot, it also meant I refused to end the relationship or break my commitment to it until well after it would be apparent to any rational person that he wasn't coming back.

Even when I realized I needed to find a way to move on, my dreams were so insistent that I continued to see this person whenever I went to bed. Not exactly a great way to stop obsessing over someone.

My roommate, who had also experienced an abrupt breakup while she was still very much in love, told me that the only way she had been able to stop dreaming about her ex-boyfriend was to have sex with another person.

One night, I emergency matched with somebody on Tinder, met him at a bar that ironically shared a name with my ex-lover, and tried to pretend I was having an emotional connection with him over the sound of a bad stand-up comedian in the background.

We went back to his place, hooked up, after which I immediately asked him to drive me home. Then I blocked his number so he wouldn't be able to get in touch with me again.

Unlike my roommate though, my dreams didn't change until I had torn through about six more sexual partners. It was about a year until I stopped feeling like an emotionless robot, and that wasn't until I met a girl who I actually developed some emotions for.

To be honest, I don't know if going on a sex spree actually helped me fall out of love, but at least it helped me stop spending every night spooning with my lost love.

When my second boyfriend and I broke up, I got way too drunk and hooked up with a friend who put on a podcast in the middle of sex.

It wasn't the worst experience but it was a little... sordid. I had been in back-to-back relationships for the last six years and decided that I needed to let go of sex for a while.

It also didn't help that I was still sorting through some muddled love-feelings for my boyfriend, whom I hadn't quite let go yet.

He had immediately started dating someone else. I couldn't stand the thought of him having someone and me being on my own, so for a little while, I drove my friends crazy by fantasizing that I had crushes on just about any person I happened to come across.

After that initial period of turmoil, though, I actually settled into a pretty productive period in my life. I got some new work published and committed to work, which ended up sending me on a trip to Paris. I realized that I actually worked a lot better when I wasn't in love, because I hadn't learned how to find a balance yet.

Starving myself from sex, though, meant that the first person I ended up in bed with after was the next person I was head over heels for. And three months after that, I was even more heartbroken than I had been before. (Refer to previous heartbreak described above.)

According to my therapist, the reason it was so hard for me to let go of love is that I was terrified of loss, so I clung on stubbornly to things that were bad for me.

I ended up checking out two books from the library at the same time: Necessary Losses by Judith Viorst and The Life-Changing Magic of Tidying Up by Marie Kondo.

Both are self-help books. One teaches you how loss is an important and natural process in your life, and giving people up helps a person grow. The other one is about decluttering your home. I'm not sure they're supposed to be blended together, but they should probably come with some sort of user's warning when combined.

Anyway, I decided that if I applied what I learned from Marie Kondo to every area of my physical life, then it would have benefits for my emotional life, too. Meaning that I would be able to find a way to throw out my ex-lover with all of my possessions.

I'll admit, the process was pretty cathartic. Marie Kondo recommends picking up individual objects and holding them in your hands to find out whether they bring you joy.

While doing this, I discovered that my favorite dress actually made me deeply, deeply sad because I had worn it on the last date with my lover three days before we broke up. I had always thought it made me happy.

This process also led me to build my own altar in my bedroom, which I think was spiritually beneficial to me in the long run.

I will admit, though, that Marie Kondo's target audience probably has way more resources than I do, and if they end up getting rid of too many clothes, they can probably afford to replace them.

Protip: Going all summer with a single pair of shorts, a T-shirt, and one dress might not actually be achievable if you don't have a house with a washer and dryer.

I can't be the only one who forces myself to fall out of love by getting my partner to push me away. When I know I need to end a relationship, I feel so guilty that I make myself the bad guy.

To be fair, that last one seems fine.

Now that I have been out of serious relationships for the last three years, I hope that next time I'm in one that I need to get out of, I'll choose honesty over blowing up over something completely irrelevant instead.

Being a cruel and vengeful lover isn't a good look, even if it only comes out at the end.

When I need to fall out of love with someone, I don't lie to them as much as I lie to myself. I tell myself that I don't have feelings for them anymore, even if I do. Most damagingly, I have told myself that I never loved them ever and that the entire relationship was a delusion on both my part and theirs.

Honesty is a little bit harder. The truth is that relationships can both end and mean something. But that can be a bit harder to swallow, especially if you are still in the process of moving on.

Time helps, but if it's been a serious relationship, it usually takes at least a year for me to be able to look back and recognize that there were both positive and negative qualities to our time together. (Though sometimes, there is more bad than good, I'll admit.)

6. I Told Myself That I Would Love Again

Really the only way that you can leave love behind is to know that it isn't the last love you will ever experience in your life.

Love, like people, comes in many different shapes. Leaving a relationship, however painful, is actually really exciting because it allows you to embark on a journey where you can meet many more loves — some serious and some not.

Although you might think that your relationship was your sole source of love, I'm willing to bet that it wasn't. Hopefully, you have at least one friend who loves you deeply. And probably, since you're so charming, you have many more.

You've probably had many people in your life who care for you: family members, mentors, high school English teachers, your best friend from first grade (even if you've fallen out of touch). It's too bad that society seems to think that the only form of meaningful love comes if there's a relationship attached to it, because that simply isn't true.

Chances are, you will find romance again. In the meantime, don't you want to spend this time with people whose love doesn't hurt?

The best way I know to fall out of love with somebody isn't deliberate. It simply involves focusing on all the other loves you have in your life, and letting that one slide off center stage and fade into the background.