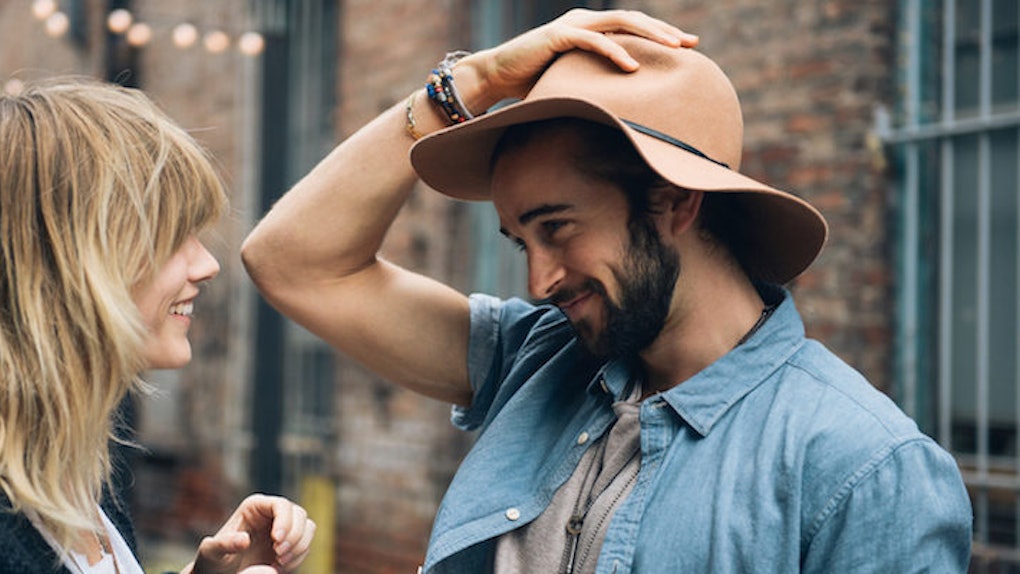 I'm going to be direct, guys: Nothing good comes easy, and finding the right girlfriend tops the list.

You're just not going to stumble upon her simply by snapping your fingers. Great things come to those who work hard for them. You snooze, and you will lose.

Opportunity usually presents itself when you least expect it. Being prepared to put yourself out there, having what it takes to win her attention and knowing how to use it will be key.

If there's one thing I've learned about dating, it's that meeting the perfect someone who really rocks your world can't be planned…but that moment makes for the most exciting part of the process.

It takes time and effort to find that unique combo of everything you're attracted to in a girl: looks, personality, overall appearance and her "this is what I'm all about" package (aka unique qualities, interests, hobbies, friends, family and the life she's made for herself in general).

When it happens and you do finally meet her, two things have to go down: One, you sure as hell want the feeling to be mutual, and two, you must have what it takes to not only catch her attention, but also hold on to it.

Finding a girlfriend should be fun, and it certainly isn't rocket science. So stop thinking about it too much; it will seriously stress you out for no reason whatsoever.

Approach the situation with an open mind. If you sense any sort of attraction coming from her end, then chances are looking very good that she's totally crushing on you, too.

The thought of having a girlfriend -- that special someone on your side who's the real MVP and 100 percent team YOU -- should also be motivating and make you really happy. Keep in mind that she will be the person you'll be sharing a lot of your life with, and she'll be opening up hers to you, too.

For all of my guys out there thinking they can't get a girlfriend, here's my advice for you: Cut loose any strings that are tying you down because it's all unnecessary baggage. Life is way too short to simply wish, wonder and daydream about what could be instead of making it happen IRL.

Whether someone hurt you from a previous relationship you've been in or you're fearful of getting rejected, break down that barrier and start fresh. The time is now. You're a great guy with much to offer. So what are you waiting for?

Put yourself out there, and you may even surprise yourself. Believe it or not, most gals have the same insecurities that you do. Get over them, or you will live your life in neutral.

Here are seven tips on how to get a girlfriend -- even when you think you can't.

Have a positive mindset.

This is honestly one of the most important steps. If you keep telling yourself you're not going to get a girlfriend, odds are, you probably won't get one. Negativity is a deal breaker in most situations…especially when you're trying to impress her.

Bring on all of the positive vibes.

I'm a firm believer in if you want something badly enough, it will come to you. Needless to say, an attraction you have with a girl must be mutual...and you have to work for it.

Don't put yourself down in the dumps, because you won't find your potential girlfriend chilling down there.

Negativity will get you nowhere fast, in any situation life presents. Karma is a real thing, bros. She can be a total bitch and kick you where it hurts if you let her. She can also be your best friend if you play your cards right.

Embrace the girlfriend situation with a positive attitude, and positive things will come your way.

I cannot stress this enough: There's nothing sexier than a guy who's confident. This has been a consistent bullet point in my advice articles because it's just so freaking important.

Every girl wants a guy who believes in himself. If you don't believe in yourself, neither will she.

A guy who takes the initiative to make that first move is HOT AF. Be motivated, and go after what you want at full throttle. If you're attracted to her… Ask. Her. Out. It's really that simple.

Which leads to my next point…

Don't let the fear of getting rejected control you.

Babe Ruth once said, "Never let the fear of striking out keep you from playing the game."

Take control and confront anything that's holding you back, whether it's the fear of rejection or another insecurity. At least you can say you took your best shot and played the game. Everyone has imperfections, and she certainly is no exception.

It would be a bummer to look back on life with regret that you didn't make that first move or take a relationship you cared about to the next level. Don't give up on a girl that easily. You probably don't meet girls who stand out to you on a daily basis, so seize the opportunity.

You deserve better than missing out on something awesome, and so does she.

It's this simple… striking out is still more impressive than sitting on the sidelines.

And here's a little secret for you: Girls can be just as intimidated as you are to take that next step. We've been hurt. We second-guess things like crazy, and we wonder what the heck is going on in that head of yours! But we want our man to step up to the plate and show us we are worthy of the chase -- and the catch.

Let her know you're interested in taking things to the next level.

If you've just started talking to a girl or gone out on a bunch of dates and it's time to define your status, the fear can be one in the same.

If she has committed to you throughout the talking and dating phases, she's OBVIOUSLY interested in you. If she seems genuinely excited when you ask her out on the first couple of dates, things are looking favorable. So pick up on the signs, guys! I really have faith in you with this one, and you should, too.

If she's been flirting with you and dropping obvious (or not so obvious) hints that she thinks you're sexy AF, ask her out on a date, and see where things go! She may not be forward, but that doesn't mean she's not interested. These are all crucial steps that lead to the ultimate goal: getting a girlfriend.

You have to keep her in the know with where you stand. There's nothing worse than the girl being on a totally different page than you because you are not communicating. You don't want to miss out on a potentially spectacular relationship because you waited too long…and she met someone else in the process.

Don't be fooled by anyone who tries to talk you out of having a girlfriend.

You do you because when it comes down to it, people who don't have your best interests at hand…well, f*ck them.

As I mentioned earlier, you can't time when that right someone will walk into your life. It's easy to say, “I want to be single until I'm 28 or 30, then I'll find a serious girlfriend.” Well, good luck with that.

When opportunity knocks, answer the damn door! If a friend tells you not to let this guy or girl in, you need to tell that friend to mind his or her own business. This is your life, and your future…not your friend's.

I'm not saying the girl you meet will end up being there for the rest of your life. But if there's something there, you owe it to the both of you to explore the possibility of an extraordinary relationship. Opportunity doesn't knock too often.

It's OK to take baby steps.

If you're intimidated by having to ask her out on a date, start with asking her out for a few drinks during the workweek. It's a lot more casual. The worst that can happen is that she says no, right? YOLO… no harm done.

Trust me, if she wants to take this a step further -- as in a "legit" date -- you will definitely feel the vibe. She'll most likely get the point across by throwing compliments and expressing how much fun she had. She will enjoy talking and texting, and so will you.

Similarly, if she's totally not feeling it, you'll be able to tell that from her responses and reactions as well.

There is nothing about this scenario that should be awkward or embarrassing. You went for drinks, and that's it. Things didn't pan out the way you thought they would, but life goes on. No big deal, right?

Know that the "girlfriend stage" will come naturally.

Don't put pressure on yourself to place a label on things just yet. Baby steps, remember?

A relationship is a natural transition. When things are going good, they usually progress at a pace that you are both comfortable and happy with. You will both want more of a commitment, and guess what? Before you know it, you'll have that wonderful someone you've been waiting for.