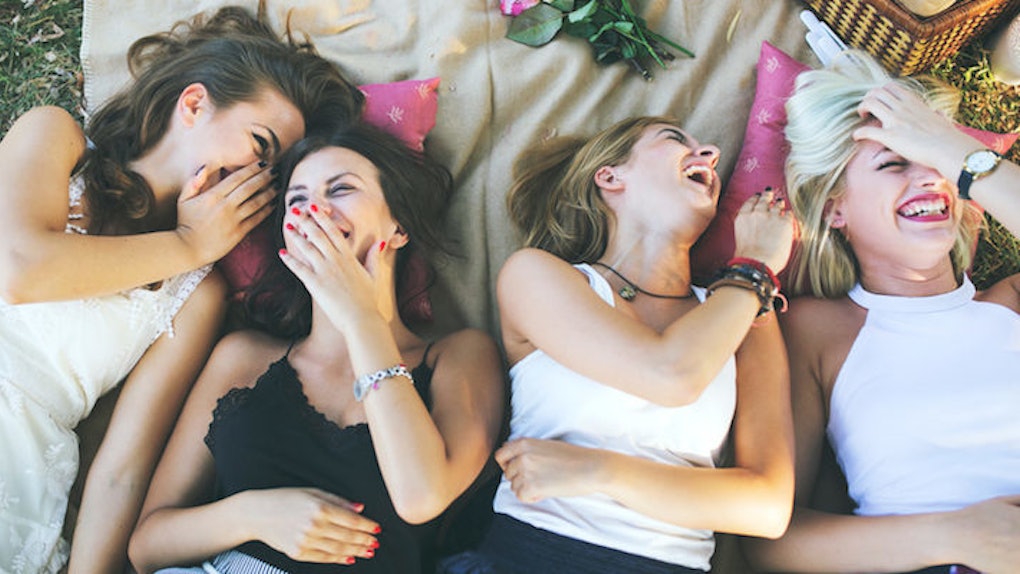 I've got a gigantic mouth when it comes to my love life. But this mouth is much smaller for my sex life. Sure, I'll tell my friends a few general things, but dishing the dirty deets about sex has never been my thing.

But what about the guys I've slept with? For every one guy I've slept with, is there an entire group of men who knows every little detail of what it's like to have sex with me?

What about my own girlfriends? Sure, sometimes they go into more detail about their sex lives than I do, but I also find myself divulging more information than a lot of my friends.

How much are we talking about our sex lives?

I conducted my own survey of 75 respondents (31 males, 42 females, 2 unidentified) to get a better idea. I already covered how much we're talking about (and complaining about) our dating lives, so now I want to know how sex, specifically, comes into the mix.

How do our feelings for our partners affect how much we talk about our sex lives to our friends?

The large majority of our male respondents (69 percent) agreed that the more they liked someone, the less they told their friends about sex with that person.

As for why, our respondents seemed to be split between two different schools of thought. There were men like Paul, 22, who said, "My friends wouldn't care beyond the first few hookups, and if I like someone, it will last longer."

Then, there were men who thought more like Robb*, 24: “There's a respect and protection present when I like someone, and because of that, these specific details are ones I like to keep to myself.”

But what about the ladies? A large number of our female respondents (44 percent) said that the more they liked someone, the less likely they were be to discuss their sex lives with that person to their friends.

Most female respondents shared the rationale of Nicole, 23: "Out of respect for him, I don't share certain things. It's our sex life, and I love having girl talk, but I respect that our sex life can have private moments too.”

Forty-two percent of female respondents agreed that they would actually talk more about their sex lives to their friends if they had feelings for the person. Zara, 29, explained, “The only time I have really amazing sex is when I really like someone, and it's so rare that I HAVE to tell everyone I'm close with! They all know how rare it is, so they know if I'm talking incessantly about the SEX I'm SUPER INTO IT.”

Laura, 22, offered a different reason: “If it's casual, no one really needs to know, but when I really like someone, my commitment level goes up, and so I want to share more with friends. Plus it's kind of a way to 'vet' my partner -- if my friends agree my sex life is good, then I know it's good."

Now let's get to the good stuff. What about our sex lives are we talking about the most?

I expected every boy I had ever had any sort of sexual encounter with to go home proudly proclaiming she just banged the sh*t out of me (yes, in my mind this is how I imagine "guy talk"). But to my surprise, male respondents were much quieter about their sex lives than the female respondents.

Overall, men and women were pretty much on the same page about how they were talking about various aspects of their sex lives. If you're a guy who just banged a chick, odds are she's ALWAYS going home to tell her friends about how far you went (45 percent), whether or not you were good in bed (38 percent), and what your body was like (29 percent).

If you're a girl who just boinked a guy, chances are he's ALWAYS going home to tell his boys how good you were in bed (19 percent), the positions you f*cked in (19 percent) and what your body was like (13 percent).

There were, however, some major differences in the ways men and women talked about how far they went and the presence of an orgasm.

There was a part of me that assumed every guy was just lying about how much sex they were having to appear more manly to their friends. But there is part of me, as a female, that understands the female needs to lie about how far you went to keep from looking like a "slut" or a "whore" even to your own friends.

As far as the presence of orgasm, the large majority (81 percent) of male respondents revealed that they barely ever would discuss the presence of orgasm with their friends. But 59 percent of female respondents revealed that they would discuss it with their friends pretty regularly (either frequently or always).

This obviously isn't a huge shock. Males tend to consistently have orgasms, so they aren't that newsworthy.

When asked if they've ever lied about their sex lives, the majority of male and female respondents said they never have (boring, I know). But the good thing is that juicy story your bestie told you about last night was probably true.

Oh, and guys: Never forget to manscape. There's a 38 percent chance that girl's going home to tell her friends about your dong, and she will NOT lie about how hairy it was.