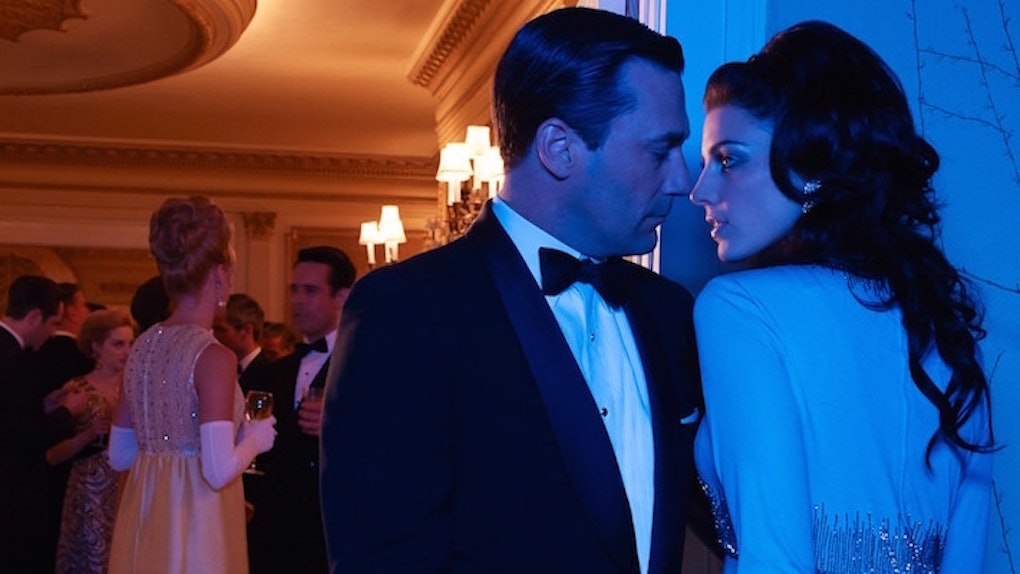 If You Want To Be Happy, Cut Out The Guy Who Won't Commit

There's this guy we all keep around, and he's just simply GOT TO GO.

You know the one. I haven't even described the guy yet, and I'm willing to bet $8 trillion you have someone in mind right now.

But if you insist on playing it cool, I'll go ahead and describe him to you.

He's the guy who gives you just enough without ever really giving you anything at all — your kryptonite, basically.

He's the guy who gives you just enough without ever really giving you anything at all.

OK, now am I ringing any bells? No? Allow me to keep going:

He's the one who's screwed you over more times than you can count. But for some reason, you only seem to remember the few times he pulled through for you.

He's the one your friends despise. But you constantly find yourself defending him.

He's the one who's been in and out of your life for what feels like ages. But you can't accurately call him anything more than "a guy I hook up with sometimes."

He's the one who never seems to have time for you. But your schedule is always wide open for him.

He's the one you've almost gotten over a million and one times. But somehow, he's managed to swoop right back in with a half-ass profession of love, an apology or maybe even a one-word "hi" text that shot you right back to square one.

He's the one constantly deflecting blame by saying, “I'm sorry you feel that way,” instead of, “I'm sorry I did that to you.” But you find yourself accepting his shitty apologies anyway.

He's the one you've shed real-life tears over. But none of those tears ever seemed like they were enough to cut him out of your life once and for all.

He's the one who told you time and time again he's not looking for a relationship. But for some reason, you find yourself still holding out for the day he changes his mind.

Now, I KNOW you know who I'm talking about.

I say "he" because I'm writing from my own perspective (aka a straight female), but regardless of whether you're straight, gay, male, female, human or alien, we all have one of these in our lives. And if you don't have one currently, I'm sure you've had one before.

BUT ENOUGH IS ENOUGH WITH THE TORTURE.

You're a functioning, sane human being, and you want to find love and be happy. So let's make that happen.

First, it's time to accept some cold, hard facts:

He's not your friend, and he never will be.

Yeah, I know I sound like all of your friends, your mom and that one co-worker you go to for advice (because she really has her shit together), but THERE'S A REASON WE'RE ALL SAYING THIS: It's a fact.

I don't care if you guys get along in ways you don't get along with anyone else. It doesn't matter that he makes you laugh harder than anyone else or that he gets your humor, believes in your dreams, has the same taste in food and even likes that weird book you read in fifth grade.

The fact of the matter is, no matter how well you two get along, he's never going to be your friend.

For me to say this is a lot. I'm a firm believer that guys and girls CAN be friends! Even exes! But the fundamental basis for friendship is respect.

I'm sorry to report this guy does not respect you. He's the same guy who was perfectly content with making you cry regularly and having sex with you whenever it was convenient for him. That guy is not good friend material.

He does not really care about you or your happiness at all.

This guy doesn't care about you; he just cares about having you.

You've experienced the same cycle a billion times at this point: He knows he has you, and he gets comfortable, so he stops paying attention. The truth is, he couldn't care less. You're just an option on the table.

Then, he thinks he's losing you, and suddenly, you're the best thing that's ever happened to him. He can't get enough of you. He misses you and now, he desperately wants to hang out. He feels bad about the times he never managed to apologize for. He wants to go on the date he never actually took you on.

THIS IS NOT BECAUSE HE CARES ABOUT YOU. This is because he wants to keep you around for his own ego.

He doesn't like you enough to date you, and he never will.

Maybe he was too busy with work. Maybe his last relationship messed him up too much. Or maybe he's still messed up from his parents' divorce.

But I don't care what his excuse was. The fact of the matter is, he didn't want to date you. Sure, circumstances could have been hard, but he wasn't even willing to try it out. Let me rephrase that: He didn't like you enough to try it out.

Stop holding out for the time you think he might change. And stop holding yourself back from a shot at something real, solely for the fantasy of a guy completely changing who he is for you.

Most importantly, accept the fact that you deserve more than someone who needs to be convinced to date you.

Accept the fact that you deserve more than someone who needs to be convinced to date you.

Hopefully, this was enough to convince you to end things with this person in your life and actually give someone who DESERVES YOU a chance.

I mean, don't go out of your way to end things. (They doesn't go out of their way to do anything for you.) But maybe don't respond the next time they text you.

You're awesome, cool and wonderful, and you deserve someone who appreciates you right off the bat.