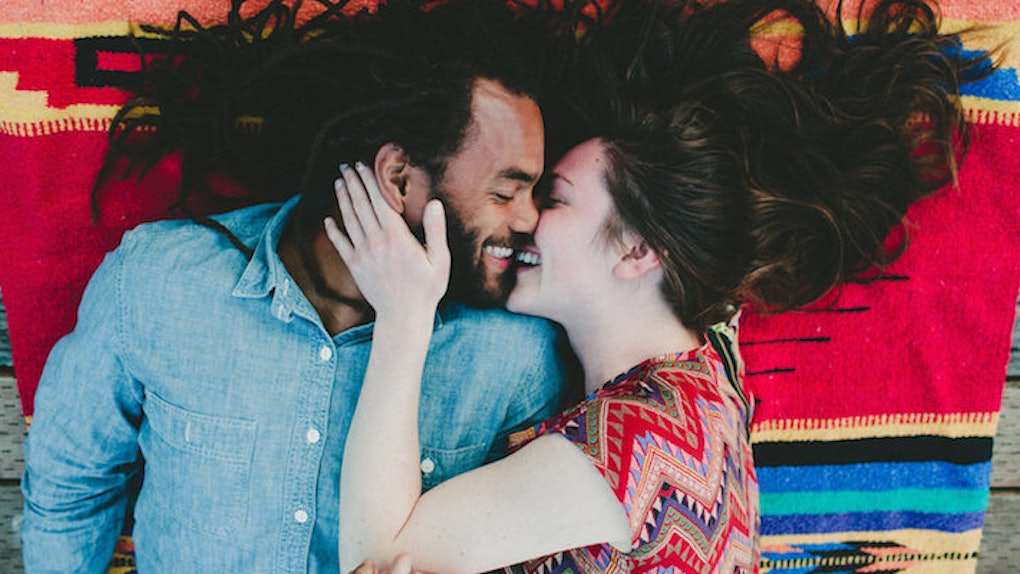 It Works Every Time: Why Girls Should Always Make The First Move

Oh, you took the initiative. That is sexy.

There's a double standard in the dating world, or at least a complete imbalance. See, as many strides as we have made toward equality and women's rights, there is one facet that everyone seems to turn a blind eye to: mating.

The most basic and arguably one of the more important elements of humanity is sex (and, on a deeper note, reproduction), and the art of going from standing next to a member of the opposite sex to lying horizontal preparing for coitus is a skill that's been mastered by more men than women.

If you're a good-looking woman who flips her hair seductively and gives me a grin, I am more than up to getting down to business. As a guy making approaches, this is the best case scenario: The initial start of conversation went smoothly, both parties have shown interest, the intensity of the flirting has increased drastically, and there has been a conscious decision made among both parties to sleep with each other.

Well, the women make a conscious decision. As a member of the male species, I can vouch that we follow our penis like a compass leading us to the North Star. If they make the decision, we will follow without fail. That is the best case.

Let's think about how it realistically occurs more often than not.

A guy walks into a bar with his friends. He eyes a group of women at a corner table and instantly surveys the scene for signs of engagement rings. If said indicators are not present, he may approach the table and try to initiate a lighthearted conversation. If the conversation falters and goes nowhere, he'll rinse and repeat with groups of women until one is found that is acceptable of his advances.

Once targets have been set, the man must then walk the tightrope between being nice, and mysterious, and rebellious, and confident but not cocky, and interested without seeming like he is trying too hard. If he can manage to balance all of this and do the social acrobatics necessary to distance himself from the hoards of other men who have made lackluster approaches since the day she grew a set of tits, he may then start to really try to garner interest.

Fast forward to an hour later. Let's say that everything was going well, pheromones were going off uncontrollably and the sexual tension was so thick it could be cut with a knife. Now, the pressure is on for the man to make a move.

Whether it's the casual and easy “I'd like to see you again. What's your number?” question, the slightly more ballsy kiss goodnight move after getting the number or the swing-for-the-fences attempt of “I live right down the street from here, why don't you come over and watch funny YouTube videos of dogs acting like humans," it all comes down to the man mustering up the courage, facing the possibility of rejection and going for it. No matter what he tries, it's always a gamble with his self-esteem.

I think this is all pretty much common sense,  and it's something every Millennial has embedded in their psyche since they were kids. Men make the moves, and women either accept or decline.

Nowadays, I say f*ck that. In almost every other important aspect of life, men and women are being treated equally and given the same amount of consideration. I think it's about time the dating world stepped up and stopped living in the past.

See, ladies, us guys are not only impressed by your boldness when you approach us, but because you have also made yourself look that much better than every other passive woman there. You are confident, you exude an air of beauty, and you're not scared to go and try to get what you want.

All of that becomes clear to us the moment you make the first move. We're thrown off guard. This is something we are not really used to. When you can make the first move, initiate conversation, and keep the banter going effortlessly we're flat out shocked.

At the end of the night, if you ask for our number, give the obvious signs you want us to kiss you and offer to take us home or come home with us, we're thinking you're the equivalent of a leprechaun riding a unicorn. We are not sure if this sh*t is real or we're hallucinating.

Taking initiative is sexy. Take it from a guy's point of view, a guy who has many female friends and has certainly hooked up with his share of women.

I'm a guy who has done the approaching and has been approached as well. I'm a guy who forgets half the women he hits on but will never forget the ones who acted with such self-assurance that they had no qualms with hitting on him.

Ladies, you have to realize there are a lot of guys who don't know how to approach women, but otherwise would make for great boyfriend material. They are just trying to get past that one little hiccup.

So, for all of you single ladies who complain about being single, take the initiative. If you think he's attractive and he hasn't hit on you, don't assume it's because he doesn't want to. Maybe he doesn't have the thick skin needed to deal with rejection after rejection and just can't stomach another one right then and there. In his mind, he's already been shot down before he opened his mouth because his past hasn't proven differently.

By not taking initiative, there is absolutely no telling how many good men you miss out on and how many of those guys would make great boyfriends, husbands and fathers.

You may never know. But you'll certainly know what it's like to cry into your pint of Ben & Jerry's Rocky Road when Valentine's Day comes around next year, and you're the only one you know without a date.

Taking initiative is sexy. It could change your life and the life of a lucky (albeit shy) guy, too.