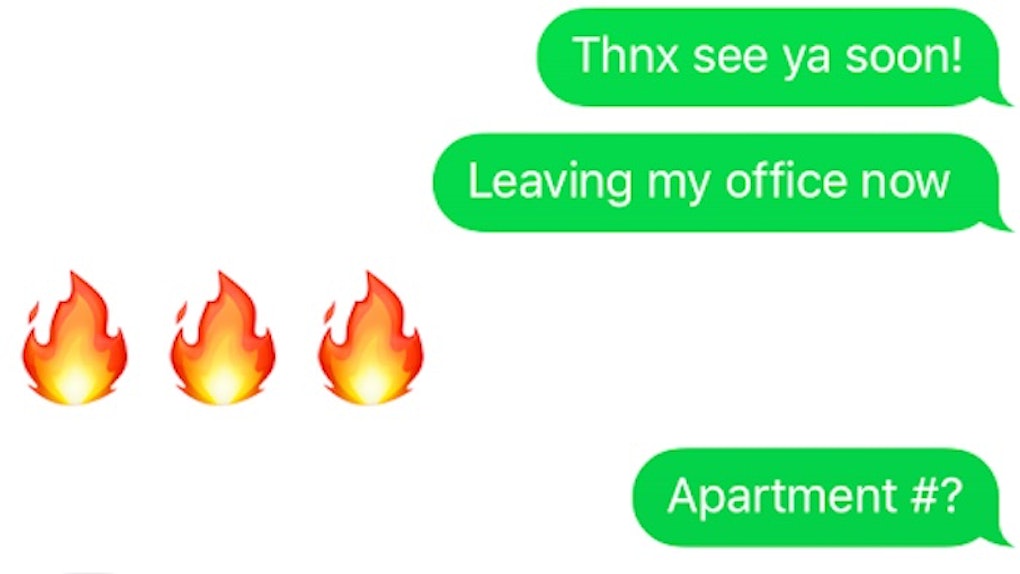 Have your own ghosting story you'd like to submit? You can submit your story here, or send over to boomghosted@elitedaily.com.

This week we have Chloe* who was ghosted by a dude who literally farted in bed after having sex with her:

I matched with this guy on Tinder, and we chatted for a while before I kind of forgot about the convo (oops). A few weeks later, we matched again on Bumble. I messaged him there, apologizing for being the reason our convo died, and said I hoped I could make it up to him on Bumble. He agreed. Our conversation was fun and filled with lots of flirty GIFs, so when he asked me out for drinks, I said yes. He looked a little different in person, but he was still cute. We got along very well and had a ton in common. And after our date ended, and we were waiting for the subway together, he kissed me. The whole night was really great. Then, he asked me to hang out for a second time. This was when things started to get weird. We met for bottomless brunch that Sunday in his neighborhood. We spent a couple hours there, then went back to his apartment to chill for the rest of the day, where we hooked up a bunch (didn't have sex), watched Wonder Woman, and had some drinks. It was, again, really great. I didn't go home until around 10 p.m. But as soon as I left, I realized I left my very expensive Kate Spade watch that my mom got me for Christmas several years ago that I do not take off — ever — at his place. I texted him in a panic to please take care of my watch until I came back to retrieve it. He responded that he would. The next day was the Fourth of July. I texted him some random things just as an excuse to have conversation, but he didn't answer any of my texts all day. My friends were like, maybe he's drunk, it's Fourth of July, don't overthink it, he likes you, etc. But usually, he answered me pretty quickly, so I was still concerned that he was ghosting me. I was a little bummed because I liked him, but I was the most upset because I needed to get my f*cking watch back from him. The next morning, I texted him the fourth in a series of three previously unanswered text messages, and this conversation happened:

Now, he's definitely someone who would make funny comments like that and troll me a little. But because he literally did not answer my texts the previous day, I had no idea if he was just being his playful self or if he actually wanted me to go away and was going to take my beloved watch with him. So, confused and fed up from this (maybe) sarcastic/playful/??? convo, I texted, 'But really when are you free lol.' We made plans to meet up at his apartment that night so I could pick up my watch. I didn't know if he wanted to also hang out in addition to me getting my watch, so I tried to drop the 'we can get Seamless' bomb to gauge his reaction about me hanging around longer:

After, I still wasn't super convinced that he wanted to hang out, so I asked him directly to confirm:

His answer still wasn't good enough for me, as he emphasized my, not his, wanting to hang out. But I accepted it. I know this whole 'did he want to hang out too?' thing seems insignificant, but I felt awkward walking into his apartment without knowing if I was just coming and leaving, or if I could, like, take my shoes off and stay a while. I knew I definitely needed to see him to get my watch back, but I didn't want to impose a hang out if he didn't want one and was just being too embarrassed to admit it. I also knew that we were likely going to have sex if we hung out, and I really didn't want to have sex with a guy who originally had no interest in seeing me anymore. Anyway, I went over to his apartment later that night and got my watch. We got cuddly on his couch and ended up hanging out for a few hours. Maybe he wasn't intending on ghosting me at all, right?? JK, HE WAS. We haven't spoken since that night. This is the last of our convo, which happened right before I got to his place to get my watch:

Bonus event of that evening: We ended up having sex. In the heat of the moment, I wanted it (as one does), but I was a little 'meh' about it after I realized I'd been ghosted. Also, after we were done and chatting semi-naked on his bed, he farted. He straight up made a face, leaned forward a little bit, and ripped a loud one. And not by accident either — it was a purposeful, meaningful fart. He blamed it on his 'stomach issues.' I laughed. What else was I supposed to do? We're all human, I guess.

It wasn't bad enough that he had to loudly fart in bed with her, but he had to add insult to injury by ghosting her after the fact?! Brutal.

Honestly, my best guess in this situation is that he was too embarrassed to talk to her again after the whole farting snafu. Either that or he's just another jerkwad who decided to hit it and quit it, which, honestly, I'll never be able to understand the rationale behind.

What do you guys think his reasoning might have been? Do you or any of your friends have a similar experience? Share your responses below!