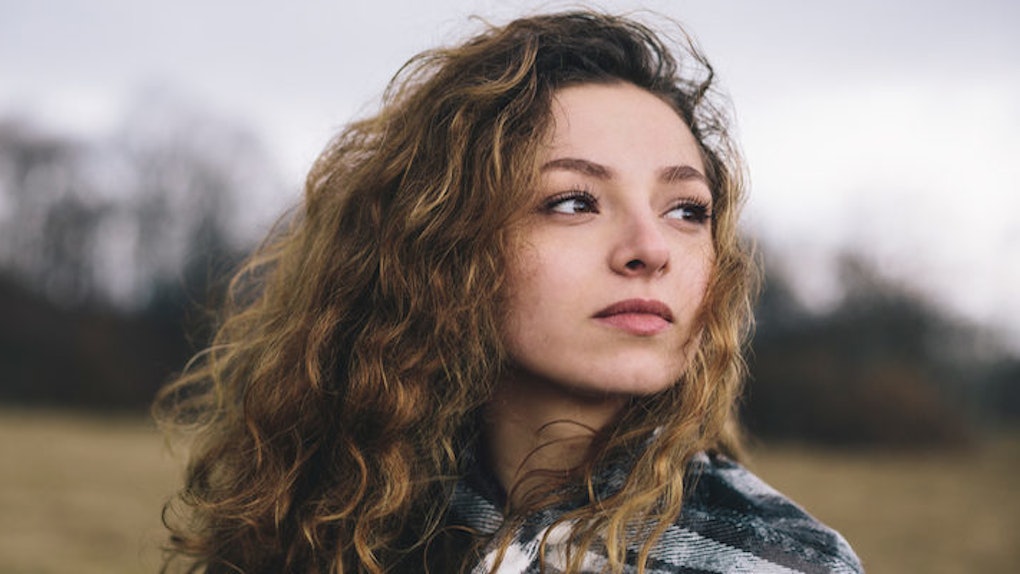 I've never really been in love, so love fascinates me and confuses me all at once. How can people fall in and out of love so seamlessly? This person is your best friend. This person consumes your every waking thought and then is suddenly gone from your life forever?! Brutal.

Honestly, a large part of why I've never been in love is because I'm scared of that whole falling-out-of-love part. The part where your heart breaks into a million pieces. That part scares me. No, scratch that. That part terrifies me.

I don't want to be sobbing in my room, scarfing pints of Ben & Jerry's and going through old pictures of me and my ex and wondering what went wrong. I don't understand how people do that.

I decided to ask around and find out from 25 people how they got over their real-life heartbreaks. Read along, and if you're going through a breakup now, rejoice! You can and WILL get over your ex someday. I mean, these people did.

She was genuinely happy to see him move on.

“Several of my friends told me that they had spotted my ex on Tinder. They were really nervous to tell me and had been holding back, afraid of my reaction. So they were surprised when I was like, "Thank God!" I realized that I really just wanted him to move on and that I was genuinely happy he was trying to date (or at least get laid).”

She pitied his new girl.

“One day I stopped being jealous of his current girlfriend and started to feel bad for her.”

Seeing his name on her phone screen didn't fill her with excitement.

“He broke up with me out of nowhere, moved on quickly and started seeing someone else. It was hard for me and took me a long while to stop thinking about him and accept it was over. The moment I realized I had finally moved on was the day he texted me to get lunch one day after a period of not talking. I saw his name on my phone and didn't feel the same ping of excitement I had previously. I really didn't even feel like I wanted to catch up. I only went to be polite.”

She felt free of his problems.

“When I drove him and the new girl he was hooking up with home, where we lived together. He puked all over her and spent the rest of the night in the bathroom floor. Not my boyfriend, not my problem. Good luck, girl.”

She realized he was a pig.

“He was taking a shot and yelled, 'Here's to having rich fathers and hot mothers!'”

She realized there was no changing him.

“I knew I was over He-Who-Must-Not-Be-Named when I saw he posted his new hideous girlfriend as his #wcw on Insta. Mind you, this is the girl who he dated on and off while he was with me, so it was a shock. But after seeing what he would settle for after me, I knew I couldn't associate myself with this person anymore. He will never change, and now that is someone else's burden to bear.”

She started focusing on the future instead of dwelling on the past.

“The moment I realized I was over my first love is when I stopped hoping that we would end up together. I thought that someday he would end up running back to me and we would live happily ever after. Now that I think more about who I am going to meet rather than who I have met, I am a lot happier and don't fill up my thoughts with that irrational hope.”

She realized it wasn't about her.

“We broke up three weeks ago. It happened a few weeks after I moved to Australia about 6 weeks ago. Even though it made sense because we were so far apart, we talked a lot about our plans after I got back, so I thought we would stick it out. It took a minute to get over it, probably a week-ish. I think I got over her when I heard she lost her job as an assistant/substitute teacher because she wasn't qualified. I realized her life got a lot harder after I left, especially compared to mine. Her breaking up with me wasn't because of anything I did or didn't do; it was her trying to help herself. I doubt this makes much sense, but I figured out it wasn't personal, it wasn't me versus her -- it was just her trying to do what's best for her. Can't hate on that.”

He caught her in a moment that was not her finest.

“After a really tough break up, I ran into my ex at the beach. It was the first time we had seen each other and I was really nervous. I walked up to say hi and immediately I noticed she had huge chunks of a Taco Bell burrito stuck in her new braces ... needless to say, I was over her.”

She found someone better.

“When I loved the next person so much more and introduced the ex to the new person and had zero pangs of anything from the past.”

The thought of his ex sleeping with someone else no longer bothered him.

“When they told me to my face they slept with someone else, and I didn't care enough to even have a reaction — I legit just left the room and took my sh*t with me.”

She had no desire to spend time with him.

“When he invited me out to drinks (yes, free cocktails all night) and for the first time ever I had absolutely no desire to go.”

They both found other people.

“It was a two-part process. The first? I started hooking up with one of his good friends (who also happened to be his roommate, oops) and I caught wind that it didn't bother him at all -- and that didn't bother me at all! The second part came soon after -- he introduced me to his new girlfriend, and I didn't even break a sweat. But I did really want to tell her to run far, far away from him for her own good.”

She rarely crosses his mind.

“Well, I thought about her for the first time in years to fill out this survey.”

He realized things would never go back to the way they had been.

“Well I broke up with my ex and didn't really think about her after. Then, I saw her at some event and we hooked up. It was kind of like going back to your hometown after you've moved out -- familiar, but wrongly so. We banged and that was cool. Then I left, she texted me, and I didn't answer.”

His apology meant nothing to her.

“When he claimed he was sorry for not talking to me for a year after breaking up.”

The sight of him with someone new didn't bother her.

“I saw him walking down the street with his new girlfriend and I didn't get that horrible pit-in-your-stomach feeling. Instead, I felt absolutely nothing. That feeling quickly turned into elated pride, because I was like, "You go, girl!”

He realized they could still laugh together.

“We had been friends long before we dated. Things got really serious really fast, and we ended up breaking each others hearts a few times over the year and a half we dated. The universe would just get in the way and we couldn't make things work. After the last time we split, things were hostile for a long time, but I knew we were back to being the same great friends we had once been when we had coffee about a year later, laughed, and just enjoyed hearing about the other person's life without feeling any sort of animosity. That isn't to say that it doesn't hurt every once in a while, but if I just became numb to all of it, I would forget the lessons I learned loving, being loved, hurting, and being hurt.”

“You know when you like someone and their name kind of screams out at you wherever you see it? I knew I was officially over my ex-boyfriend when that finally stopped happening. There was this one moment several months ago when I typed in my ex's Instagram username in the search bar, and upon seeing his name pop up, I had none of the physical reactions that I had previously. My heart didn't explode out of my chest and I didn't have a panic attack. I couldn't believe it. As his page loaded, I even remember thinking something like, 'I literally don't even give a fuck if I see that he has a new girlfriend.' That had never, ever happened to me before. It was big. Another example: Around that time, I also saw his name come up under people who had looked at my Snapchat story. Once again, no exploding hearts and no panic attacks. The more I saw his name, the less I reacted physically. You have to understand that I thought getting over my ex would be impossible. The fact that all of this was happening was a goddamn miracle.”

His ex's quirks stopped being lovable.

“When I thought something they did was embarrassing instead of lovable.”

The thought of him repulsed her.

“I knew I was over him when his touch started to repulse me, his scent started to make me want to throw up and his voice made me want to shoot myself. Needless to say, I broke up with him.”

She found herself craving a LOT of distance.

“One summer I spent three months in China just to 'get away' and have some 'me time' to 'figure out what I really wanted.' Nothing says 'This isn't working' like putting 7,000+ miles between you and your boyfriend.”

His life turned into a joke.

“When he told me he wanted to quit his full-time job so that he could become a professional WWE wrestler. Not joking.”

She accepted that she wasn't the right girl for him.

“I weirdly realized I was over my ex when he finally got a new girlfriend. I was his first and only love, and one of the reasons we broke up was because he wanted me to be someone that I'm not. When I finally saw him in love with someone else, I was able to see how incredibly different I am from that person. She exemplified everything he ever wanted me to be, but the reality is we are so different that it just showed I was not the right person for him. It gave me the closure to move on because seeing her made me realize why our relationship failed. We both just wanted different things, and that's perfectly OK.”

His wild antics stopped being endearing.

“My ex was known to do some pretty weird/wild things in college, but I'll never forget the night I knew I was over him. It was 3 am on a Saturday night and I was sleeping until I heard a terrifying rapid knock on my window and door. My housemate answered the door and it was my ex wearing nothing but his glasses and sneakers, cupping his junk and shivering. He had gone streaking alone and lost his room key. I'm nice, so I let him stay the night (we didn't f*ck) and he basically did a walk of shame home in my Victoria's Secret sweats I was nice enough to let him borrow. After that, I knew I would never again be attracted to him.”