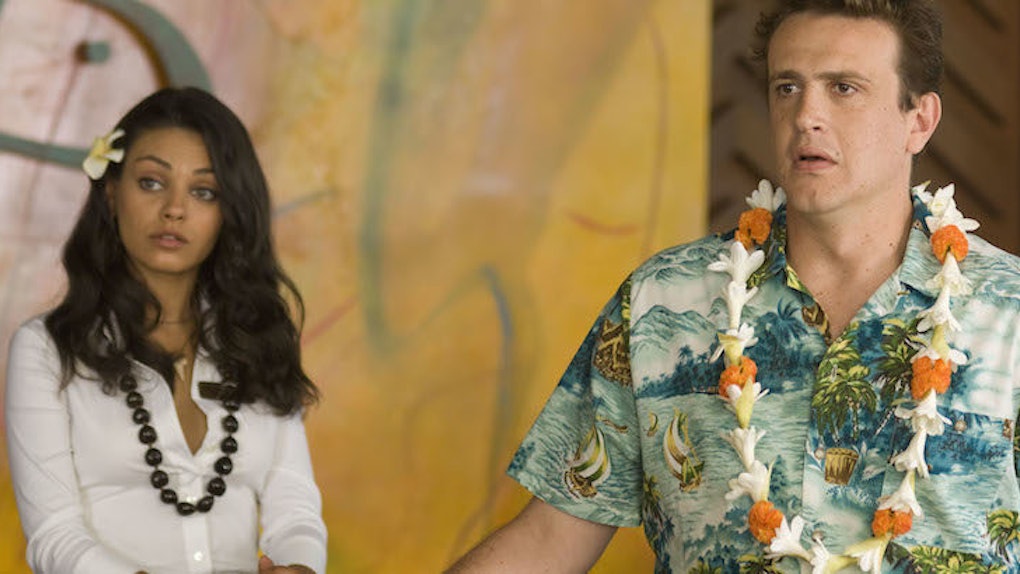 Forget Sarah Marshall: All The Ways Your Life Will Never Be A Rom-Com

As an avid watcher of rom-coms, I often find myself comparing my life to a romantic comedy. Whenever I enter a new romantic situation, I search for an old-fashioned rom-com that will serve as my yardstick.

Do I have a guy best friend? Total "When Harry Met Sally." Do I have a friend with benefits? Total "Friends with Benefits." Am I being a colossal bitch to a perfectly nice guy? How "No Strings Attached" of me.

And the thing is, as ridiculous as it sounds, I really do find myself expecting things to work out like they did in the movies.

The problem here is I have learned they never do. No matter how closely your life resembles the plot of your favorite romantic comedy, the fact of the matter is it is just not.

The situation: You are in love with your best friend’s boyfriend/fiancé/husband. At some point (maybe after they broke up), you two slip up and sleep together.

The fantasy: In an ideal world, you can have it all. But even the movie doesn’t romanticize it for you that much. In “Something Borrowed,” she gets the guy. He admits he’s always loved her too, and they end up together while she ends up alienating her best friend from childhood.

The “Friends with Benefits.”

The situation: You and your platonic friend decide to casually start having sex.

The fantasy: You guys will, in fact, have casual sex for a while. But this will escalate into something more, and he will eventually surprise you with some sort of grand gesture (i.e flash mob in Grand Central) and profess his undying love for you as a friend who he also can’t keep his paws off of.

The “When Harry Met Sally.”

The situation: You have a best friend of the opposite gender. You've maintained this friendship for years by keeping the relationship strictly platonic. You guys slip up one night years down the line, and you realize maybe he really is the one.

The fantasy: He realizes that "OMG I LOVE HER TOO" and runs across the city to list all of the little things he loves about you just in the nick of time to be your New Year’s kiss. Then the two of you naturally spend the rest of your lives together as the cutest couple ever.

The reality: Harry and Sally waited too long. If you think you have a shot at something, that's great; don’t wait.

The situation: You find yourself going from lonely spinster to torn between two men -- neither of whom are necessarily right for you.

The fantasy: Despite your undeniable attraction to player Bachelor #1, you find yourself making the right decision and going for good-on-paper Bachelor #2. The two of you live happily ever after, and he takes care of you (saving you from Thai prisons, etc.).

The reality: Darcy was kind of a condescending d*ck. He loved and took care of Bridget in the same way you would love and take care of a cute puppy. Just because he was better than Daniel didn't make him the right guy for her.

The situation: You fall for someone who comes from a completely different world than you.

The fantasy: You guys are able to look past all of the glaring lifestyle differences and make it work as a result of your pure and undying love for each other.

The reality: As much as we want it to be, pure and undying love sometimes isn't enough to overcome your differences. It didn’t work out for Romeo and Juliet, and it probably won’t work for you. It is important that the person you spend the rest of your life with feels comfortable becoming part of your world.

The situation: You fall for a great guy who just got out of a really serious relationship.

The fantasy: He picks you! He realizes she was wrong the whole time, and you were right, and you are the one who appreciates him for who he really is -- weird puppet shows and all.

The reality: Mila Kunis was his rebound. Any person that fresh out of a relationship is in no way, shape or form ready to move on. He is literally using her to forget Sarah Marshall (who he still ends up getting a blowie from even when he’s with Mila).

The “No Strings Attached.”

The situation: You try to have a casual hook-up situation with a guy, but you’re just too busy with work and honestly not emotionally ready for anything more.

The fantasy: He keeps trying and being so sweet until he finally wears you down.

The reality: First of all, your job is no excuse for sacrificing a love life. The fact of the matter is that, if you like him, you will actually make it work. Second, any guy who continues to pursue you after you have persistently been that colossal of a bitch probably has a few problems of his own he needs to sort out.

The situation: Whether it is intentional or not, you find yourself pushing him away -- despite the fact that you actually like this guy.

The fantasy: He forgives you and sees past your nut-job behavior, and the two of you live happily ever after.

The reality: You were insane. He will not forgive you. And, even if he does, that insane person intentionally pushing him away wasn’t the real you, was it? Who is it that he actually fell for?

The “He’s Just Not That into You.”

The situation: You have been chasing this guy for a long time and, despite all of your friends’ many excuses for his behavior (he likes you too much; he’s playing hard to get; he’s intimidated, etc.), all signs point to the fact that he's just not that into you.

The fantasy: You’re the exception, not the rule! He WILL propose to you (even if he swore he would never get married), and he WILL show up at your front door professing his feelings for you (even after he looked you dead in the eye and told you he had no feelings for you whatsoever).

The situation: Always the bridesmaid, never the bride. Maybe you’re not a bridesmaid 27 times, but you're constantly labeled "the single friend" -- your chronic singleness a pretty obvious result of your refusal to be vulnerable.

The fantasy: You meet someone who forces you to break down those walls you spent such a long time building. He helps you finally let loose and have a grand time. He gets you over your longstanding crush who wasn’t worth your time, and you realize there was really someone out there for you all along.

The reality: Nobody is going to force you to break those walls down. And does getting you hammered at karaoke even really count as breaking down your walls? Not to mention the fact that you should probably not end up with the guy who wrote an embarrassing exposé on you.