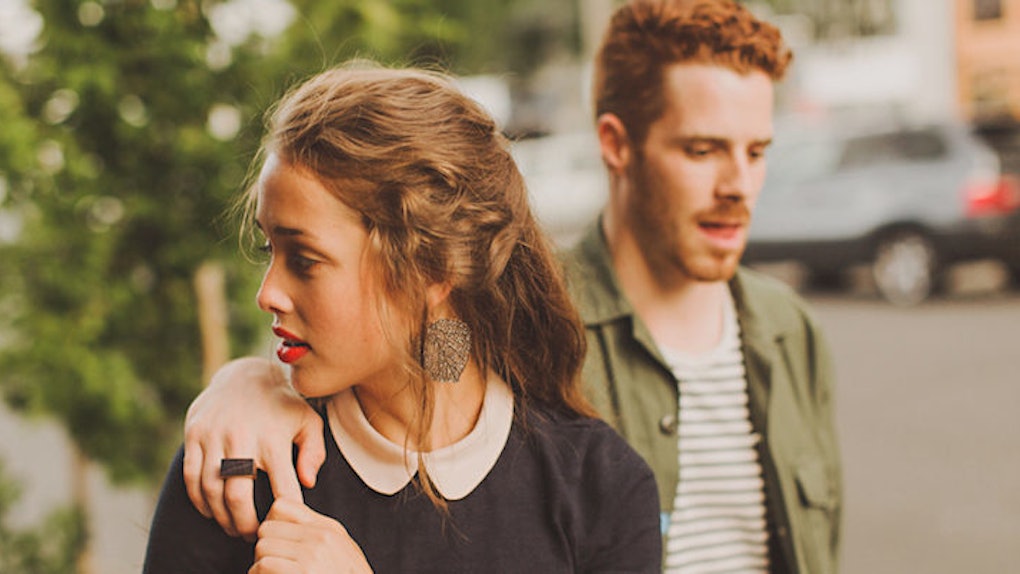 Hate The Player, Not The Game: How Dating A Player Turned Me Into One

Soon into my freshman year of college, I met a great boy. I stopped seeing other people because... well, because I didn’t want to.

I liked him, and we were regularly hooking up, so why would I bother being with anyone else? In high school, this made sense. In college, not so much.

After a month-long romance, I was pretty sure we were on the fast track to being in a real, bonafide relationship. That is, until I went home for a couple days... and he brought another girl to a date event that weekend.

At first, I didn’t see this as a big deal. I was gone, so he brought a friend. If he were out of town when I had a date event, I would have done the same.

But then I started hearing about this date of his. Friends kept telling me that they'd been all over each other. A few days later, my Facebook newsfeed was flooded with pictures of them having the time of their lives at this event.

Meanwhile, our relationship seemed the same. We were still texting constantly, and as soon as I got back from my weekend at home, we went back to hanging out all the time. I was just so confused. When would he even find the time to be seeing other people?!

So I asked him point-blank if he was seeing anyone else.

TWO. Two other girls! And that was just the number of people he’d been porking! How many girls was he casually making out with at parties? How many was he texting or taking on dates? I was floored.

He could see the worry in my eyes, and he tried to make it better.

"But I still like you the most!" he said. "I want to keep doing what we’re doing. I really do like you a lot. I swear! I just thought we were on the same page about this.”

That was when I lost my sh*t.

“NO!" I said. "That is NOT how you treat someone you really like. As a matter of fact, you do NOT really like me at all. Because if you really liked me, you wouldn’t even feel the need to be with other people.”

I rushed back to my dorm so that I wouldn't burst into tears in front of him. I replayed the conversation over and over again in my head, and I was overwhelmed with shame. I looked crazy. I was so embarrassed.

Why would I have assumed that we were exclusive?! Was I insane?

I wished more than anything that I had something cooler to spit back in the moment. Something casual and nonchalant. Like, "Oh, haha, no worries. I’ve been seeing other people too, but I’ve only been having sex with four of them.”

But no. That wasn't the truth. The fact of the matter was that I liked him. And, until that moment, liking someone meant I was with that person and that person only.

It’s taken me until just now to realize I was right. Freshman-year Candice was right. That’s the way it SHOULD be. But for the next few years, I convinced myself of the opposite.

I became a player, and I’m here to tell you from first-hand experience that the player life is not all it’s cracked up to be.

After that mortifying experience, I decided that I would absolutely never let myself feel that stupid again.

Never again would I place all my eggs in one basket. I had been hurt by a player, and I was determined not to feel that pain again.

I promised myself to keep a second guy waiting on the sidelines -- even if I was absolutely crazy about someone else. I wanted to be ready when the first inevitably f*cked me over. I wanted to be bulletproof.

Yes, I was bulletproof. But I was never truly happy. Content? Yes. But happy? No.

If you’re investing only half of yourself in something, you’re never going to come out of it wholly satisfied.

The worst part of everything was this: In my attempt to protect myself, I hurt plenty of perfectly nice boys -- just as I had once been hurt.

I’m not mean. I wasn’t hurting people out of cruelty. Like most people who cause others pain, I did it out of insecurity.

I did it to prove -- to myself more than anybody else -- that I was better and could hurt them before they could even throw the first punch.

A friend was telling me about how she can tell whether or not she likes a guy based on how she feels when she finds out he’s seeing other people.

Yes, you read that correctly: WHEN she finds out he’s seeing other people. She believed that every guy did this.

Like her, I started to expect guys to sleep around. I wasn't having the normal emotional reactions I usually did in relationships.

I'd trained myself to become so numb that I didn't even realize I had feelings for people -- until it was too late, that is.

I think a lot of us have started to confuse selfish jealousy with real “feelings.” Were we upset because we actually liked the cheating guy to begin with? Or because we felt like we had lost the "game"?

You have to bet big to win big. But the key to being a true player is never betting big. You minimally invest in several potential mates to avoid investing in one person.

So, yeah, you're not going to get hurt this way. But eventually, you get so good at avoiding pain that you turn numb.

Nobody excites you anymore. No name flashing across your iPhone screen has the power to make you dance around your living room in victory like you used to.

It wasn't until my senior year of college that something changed. I was seeing someone a bit older, and, for the first time in ages, I felt safe. I trusted him. And with trust comes respect.

I knew without asking that he wasn't seeing other people. He respected me, and I respected him. I felt I should follow his example.

That's the way it SHOULD be when two adults trust each other. It was so logical and natural, but something about it was also completely revolutionary and liberating. I was freed from a lifestyle I hated.

It's funny, because I knew this all along. But college and hook-up culture had convinced me otherwise. For the longest time, I felt like an idiot for naturally tending towards monogamy.

I'm starting to realize that the player was the idiot all along.