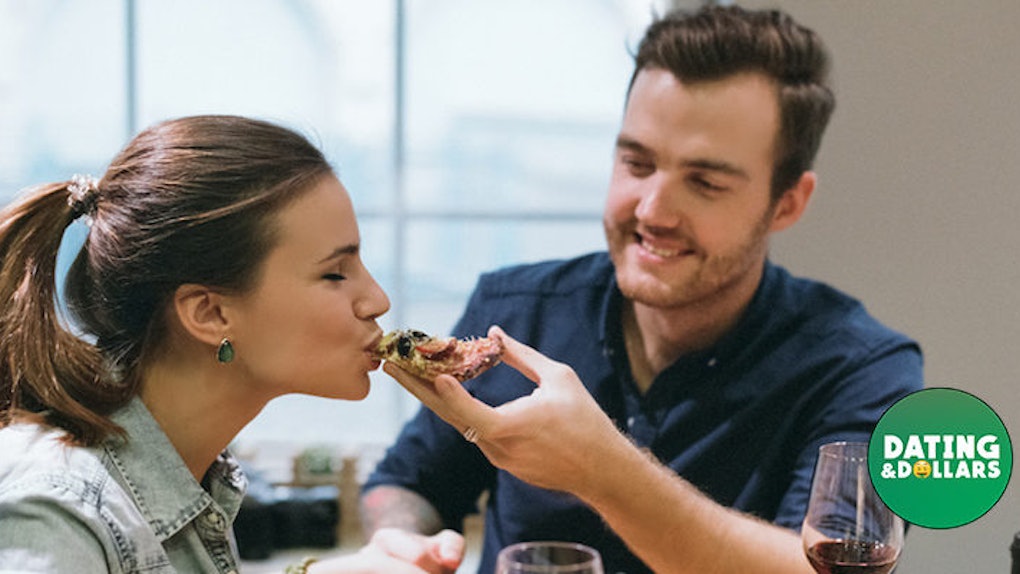 Recipes You And Your Partner Can Make On Date Night

If I could eat out every day, I would.

Money regularly burns a whole in my pocket, and when it comes to food, I would much rather wine and dine out (or hang out with my pal, Seamless) than peruse up and down grocery aisles in preparation for daunting, home-cooked recipes.

But here's the thing: when I have free time, I actually enjoy cooking. And it's pretty damn rewarding to see someone else enjoying the meal that I just slaved over.

Plus, it saves me a TON of money.

Since I'm dating, I've repeatedly found myself seated across from someone at a dive bar or swanky restaurant with a healthy amount of food and drink.

55 percent of couples say dining out is what they're most likely to spend their money on.

In the moment, I'm YOLO'ing it up, but later, I'm cringing at the mere thought of how much cash I've hastily thrown away during my streak of dinner dates with guys I've never seen again.

And I'm not the only one: In our new Elite Daily survey, 50 percent of single men say their absolute number 1 concern when it comes to money is "how much I spend on a date."

And 55 percent of men and women in relationships say that dining out is what they're most likely to spend their hard-earned cash on.

Take those percentages, multiply that, throw in some decimals, and.. you've got A LOT OF MONEY SPENT.

With this in mind, I'm going to rethink my eating — and dating — strategy and start looking at making meals at home as a way to save, save, SAVE!

Because, let's be honest: Cooking for your SO when you can't really afford to be eating out is not only a fun, sporadic idea, it can also improve your relationship.

Cooking for your SO when you can't afford to dine out is not only fun, it can improve your relationship.

"Cook a new, adventurous dish together will stimulate all your senses, and the shared goal is actually great for relationship-building," says Andrea Syrtash, a dating expert and author of "He's Just Not Your Type (And That's a Good Thing)" and "Cheat On Your Husband (With Your Husband)."

Ready to get you and your SO or date situated in the kitchen, but afraid you're going to burn the house down?

Lucky for you, acclaimed Michelin starred chef and Swiss entrepreneur, Jürg "ChefFed" Federer, recently teamed up with SKYN Condoms to curate a delicious menu of aphrodisiac dishes for couples to make together.

The three recipes below feature all different kinds of sensual tastes and aromas to get you and bae revved up to devour each other next.

Plus, they'll make for a super impressive, top-notch dining experience for two in your very own home.

DIRECTIONS: In a small saucepan, bring the port wine to a boil. Reduce the heat to medium, so the wine boils lightly without rolling. Let the wine reduce until 1/4 cup of port wine is left; set the reduction aside.

Combine the raspberries, the vinegar, the hot sauce and the sugar in a sauce pan. Bring the raspberry mix to a boil, then reduce the heat and let it boil lightly until all the liquids have cooked off; set aside.

Preheat the oven to 500F and grate the cheese. Bring a big soup pot with 1 gallon of water to a boil and season the water with 2 Tbsp. of salt. Boil the penne in the water, until they have a crisp bite.

While the penne are cooking, melt the butter in a saucepan. Add the flour, stirring until both are fully mixed Add cold milk and heavy cream to the saucepan and bring the sauce to a boil. Season with pinches of salt, coarsely ground pepper and nutmeg. Reduce the heat to low.

Heat the oil in a frying pan. Crush the garlic in the skin, then add 1 of the 2 sprigs of thyme and the garlic to the pan. Sear the chicken with the skin side down until golden brown. Then, turn the chicken over and reduce the heat to medium to avoid burning before the chicken is fully cooked. Once the chicken is done, let it rest for 5 minutes.

PLATING: Pull the leaves off the stem of the second twig of thyme. Bring the port wine reduction back to a boil and briskly whisk in the cold butter. Once the butter is emulsified, remove the sauce from the heat and stir in the peanut butter until the sauce is thick like paint.

With a pastry brush, draw a stroke in the center of the plates. Carve the chicken in slices and arrange the meat on top of the peanut paint. Serve the raspberry chutney on the side and sprinkle the plate with thyme leaves.

Heat a non-stick frying pan and half of the ghee. Add the potatoes to the pan in an even layer, saute without stirring. When one side of the potato pie is golden brown, flip it. It's ok if it doesn't stay in one piece. Just rearrange to an even layer after flipping and the potatoes will re-combine.

When both sides are fried, drain the potatoes on a paper towel before plating.

Before serving, whisk the hot liquids up with up to 2 Tbsp, of butter. Season the reduction with cacao *The amount of cacao depends on the nature of the wine used, start with 1/4 teaspoon and taste. Then add more to your liking.

On a baking sheet, roast the carrots in the oven for 30 minutes, flipping them after 15 minutes. Remove the carrots from the oven

Bring the filet and the butter to room temperature. Grind the pepper with the other spices with mortar and pestle. Evenly rub the filet on all sides.

Now you can fire the potatoes (further up in the recipe). Let the steak sit for 20 minutes.

In the meantime, finish the cream and mint (further below in the recipe). After 10 minutes of rubbing the steak, heat a skillet on high heat for 10 minutes. Evenly spread half of the butter on one side of each steak.

With the butter facing down, charr the steak for 90 seconds in the skillet. This is called “Pittsburgh style” and the purpose is to charr the steak on the outside, while perfectly cooking it on the inside.

Evenly spread the second half of the butter on the other sides of each steak, flip to a fresh, unused part of the skillet and charr the steak for another 90 seconds.

Finish the steak with the carrots in the oven to your liking. Let the steak rest for 5 minutes outside of the oven before serving.

Coarsely chop the almonds. Heat a non-stick pan and dry roast the almonds. Chop the mint to chiffonade. Chiffonade are very fine and long strips that you cut from the mint leaves. Combine the almonds, the mint and the rest of the ingredients. Set aside.

PLATING: The sour cream sauce is the base of this dish, smear it on your plate and arrange all the other solid ingredients on top.

Serve the chocolate sauce in a way that it does not cover the entire dish. You should have the opportunity to eat a bite with and then another bite without the sauce.

Dessert: "Feel the Crunch" (Chocolate torte and cashew with cream and spices)

DIRECTIONS: Preheat the oven to 350 degrees. Put 1/2 Tbsp. butter in each of two 6 oz. ramekins. Put the ramekins in the oven for 5 minutes.

Bring a small saucepan with water to a boil. With a brush evenly coat the ramekins with the butter, remove any excess butter. Add the remaining sugar to the ramekins and make sure the entire inside of the ramekins is covered in sugar. Remove excess sugar.

Over the pot of boiling water, place the chocolate, the remaining butter and vanilla into a stainless steel bowl and stir until the chocolate is melted. Cool chocolate mixture and add to the egg mixture. Place completed batter into the ramekins and then onto a sheet tray. Place the sheet tray in the oven for about 45 minutes, or until the torte has set.

Coarsely chop the cashews and put them in a non-stick pan. Season with red pepper and salt and dry roast the cashews. Remove the cashews from the pan and add the sugar to the pan. Cook the sugar until it's amber in color. Add the cashews and stir until they are fully incorporated.

Spread cashew caramel flat out onto a sheet tray covered with parchment paper and allow to cool for 30 minutes at room temperature. Once cooled, crumble by hand and place pieces into a food processor. Pulse for 10 seconds or until contents are coarse.

Who kn0ws? All THIS heat in the kitchen may get you and your SO hot and bothered.

Now, go ahead and put that leftover can of whipped cream to good use.