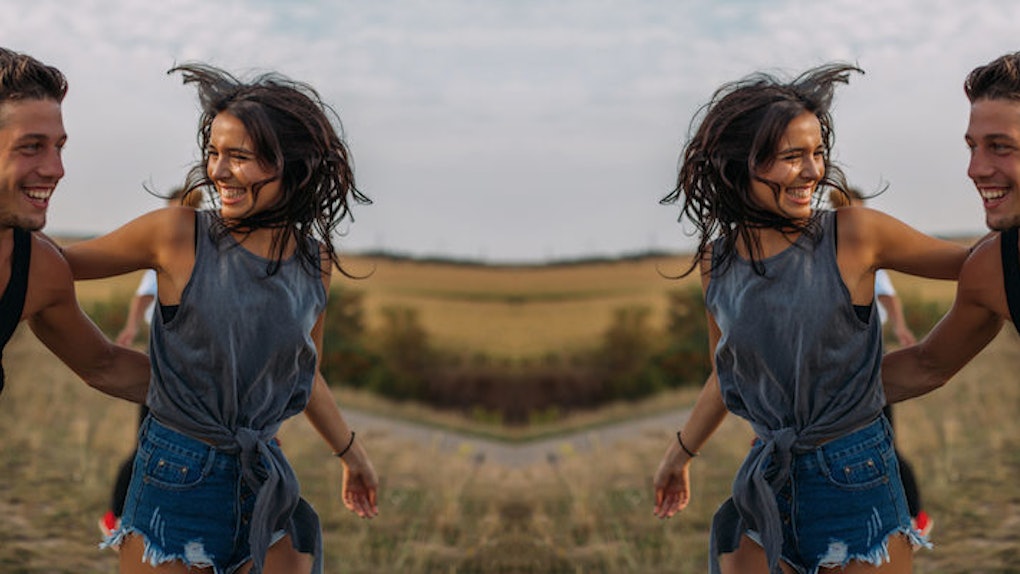 What It Feels Like To Have A Crush Again After A Long, Loveless Spell

Moving on from heartbreak is grueling. A large chunk of the past year of my life was spent trying to get over someone. But that stopped when I met someone new.

I was walking into a nail salon with my best girlfriend when I came upon my crush. He was handsome, tall and clever as hell (and later I'd find out that he was single, too). He was a sight. My eye gravitated to him over OPI's new fall colors, and that's saying something.

It turns out my soon-to-be crush was a friend of my friend's, and she was just as happy to see him there as I was.

I introduced myself as casually as I could and shook his hand; he had a firm grip. It was the first indication I'd get that I was dealing with a real man in this ocean of immature boys.

"Did your parents name you after the punk rocker?" he asked me.

"Gosh, I've never heard that one before," I said sarcastically, using every ounce of willpower I had to keep myself from twirling my hair and indicating my overwhelming glee.

"Well, for what it's worth, you're pretty punk-rock."

I thought I would never smile at something corny ever again. And yet there I was, standing with a grin stretching from one ear to the other, like an absolute fool.

I had often fantasized about how I'd meet my next leading man; maybe I'd find him at a supermarket, or maybe I'd meet him à la "Sex and the City" -- I'd drop a dollar bill on the sidewalk; he'd pick it up.

Regardless of how it happened, I knew it wouldn't be contrived. It would be wildly romantic and poetic in nature, reflecting my every hope and dream.

So when I found him in the doorway of an overpriced beauty spa, you can only imagine how excited I was. It's like someone turned on a disco ball in my dark world. I went from zero to 60 in two seconds flat.

There was no denying that I had officially left my breakup rut and entered a new state of mind.

Ah, the joy of what it feels like to have a crush again after a long, loveless spell. I can't do it justice by putting it into words, but I'll try.

“Uh-oh,” you think. “I can feel myself spiraling out of control and falling hard. It feels too good to be true, and it’s only a matter of time before something f*cks it all up.”

You fear losing your crush before you can even say you had him. You irrationally begin to think long-term, and you quell the realistic thoughts that interrupt your vivid fantasies (you probably won't get to the point of meeting his parents.)

Heartbreak turned you into a control freak, but "crushing" has made you realize there are things that are more powerful than your ability to hang on to your loss.

You have a reason to look good again.

If you didn’t know what eye primer was, you sure as hell know now. Leaving the house without makeup and perfume for touch-ups is no longer an option because you’ve got to be on your A game at all times.

If "hunk" were a scent, he'd smell like it. So you've got to smell like daisies and tulips.

Your friends are sick of you.

Your new favorite habit has become texting your friends screenshots of conversations with your new crush. Your self-doubt is high.

You secretly hope you’re going to run into him every time you go out.

It’s a big world, but hey, ya never know. Accordingly, you drink yourself to near-death to give yourself liquid courage in case you bump into him.

You preemptively delete Tinder (and then re-download it).

Because you can never be too safe, right? It’s always good to have a backup... and a backup for that backup.

You profess your love to the world (and quickly regret this).

No one cares about your crush, but you seem to think that everybody does. You immediately tell everyone within a 50-mile radius about your reawakened love life, then realize you should have kept mum -- because you'll soon have to tell them about your inevitable breakup.

It might as well be your first time up at bat; its like you’ve never fallen for a guy before.

Your inner child wakes up.

Giddy as hell, you laugh loudly and smile randomly -- and you're not sorry about it.

You believe in love again.

I had forgotten what it felt like to live life with an open heart. Sorrow had left me jaded to the point of no return.

I shocked myself by how much I was still capable of feeling.

Most importantly, you feel like a human again. It’s as if you’ve just woken up from a coma.

The air is fresher. The colors are deeper. The wound is erased. And your world is just a little bit brighter.