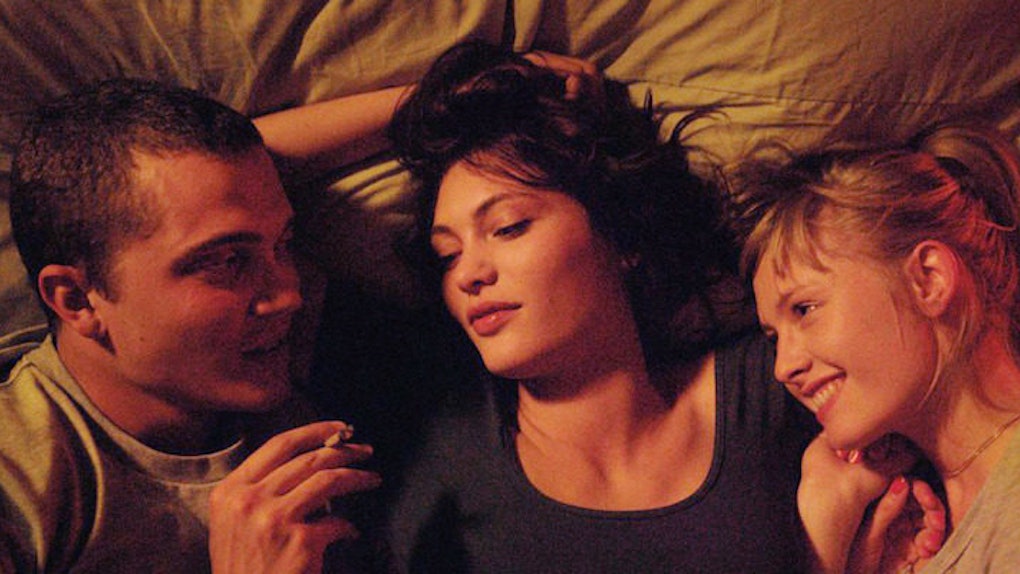 The lights were off, so I could barely see the twins, save for their naked figures pulsing through the dark. Just their outlines registered in front of me, like they were nymphy ghosts.

Were they even real?

I've been wondering lately about how things happen, both the very bad and the very good. I want to know the mechanisms that lead to certain events, the ones that take silent root in us and leave us where we end up.

Nobody else's life was going the way mine was right now, and I didn't know what I did to deserve it.

I had foreign sisters — one blonde, one brunette – undressed in a cheap hotel room in a tiny mountain town many miles from home. I barely knew them, and they barely knew me. They were on their own adventure, and I happened to stumble into it. All I had done was shown up at the right second in time.

The next thing I knew, we were here.

I rubbed my eyes. There they were, crawling up from the foot of the bed. The blonde reached my crotch and lowered. I stopped rubbing my eyes and put my hands elsewhere.

If the Christians were right and everything was God's will, and everything happened for a reason, then that had to mean the Big Man was up there looking out for my Brita filter and granting it gifts.

I couldn't get myself to believe that.

If the Buddhists were right and this was karma, then this good was some reward for some other good. Good... that I had done? I didn't think so.

The determinists would have said this was all inevitable, that there was nothing I could do to stop it. And yet, given the chance, I can recall so easily so many other nights that hadn't ended with this kind of luck — the kind you tend to dream about when you're twelve.

“Goodnight,” I'd said to them in the hallway.

“Come in,” the blonde had said.

Her sister had giggled. “We were thinking of sharing something with you.”

“Goodnight,” I'd said to them in the hallway. “Come in,” the blonde had said.

Work had sent me 1,000 miles north to write about something happening in the woods. They paid for the plane and the room, so I said sure. I had little idea what I was doing there and didn't figure I'd get into too much trouble.

On the final day of the trip, I parked at the edge of the hotel lot. I walked upstairs, did nothing for a few hours and got hungry. I showered and dressed and realized, shit, I left a pair of pants in the car. So I went back down to get them.

When I walked to my car, there was another one next to it, and the twins just appeared from it, on the far, grassy edge of the lot.

It all unfolded almost in slow motion: Here's the pitch, slow and straight. All I have to do is swing and I'm a hero.

They had short skirts and big bags.

“Want help with those?”

They were really something. And now, they were startled. They looked at one another.

“You're right,” I said. “You shouldn't trust anybody. But those look heavy.” They had to be heavier than the girls themselves.

“Sure,” one answered, her accent thick.

“Where are you from?"

Think of the complexity of the coincidences, of all that had to align, for me to meet these girls: I could have parked anywhere. I could have left a minute before or after. We lived 5,000 miles apart and were all more than a thousand miles from home. It almost defied logic and certainly defied reason.

They let me carry the bags upstairs.

“How many children do you have in here?”

“None,” said the blonde. “Just a few dead bodies.”

It was always cute when foreign girls tried jokes. They sounded so much like confessions.

“This is so nice,” the brunette said.

“Trust me,” I said. “I'm doing it strictly for selfish reasons.”

I was panting by the time we got upstairs. They let me in.

We made plans to get a drink.

They were on a three-week tour of America, and they just happened to be here. Later that evening, we drank strong mountain beer and poked fun at this ridiculous country and played Fuck-Marry-Kill with Trump, Hillary and Bernie.

You know the way you meet people on vacation and bond based on the limited time you have together? That's how I live every day. I could tell that's how they were, too. Moments may not last, but there is nothing like connecting with someone within one.

We were still drinking when the town shut down. We got kicked off the street, so we winded our way back to the hotel.

I was very drunk and very happy. I didn't know which one to kiss first. They each grabbed a hand and pulled me into their room.

I didn't know which one to kiss first. They each grabbed a hand and pulled me into their room.

I decided then I had wasted too much time living between other people's bullshit parameters. Nobody knew the power of your potential. Today was a triumph. I didn't have any money, I never went to the gym and I barely cut my toenails. All I had were a few pairs of jeans, half a fuck-you attitude and big enough balls to look a chick in the eye.

I was fucking natural selection in the ass.

Everything we've been told about the world is wrong. The world is so much more of a colossal clusterfuck than they said it would be. There are so many fewer rules. Nothing is impregnable. It's packed with an uneven amount of terrible shit. But if you stay focused and sidestep enough of it, you can stumble into some of the non-terrible.

The lights were off so I could barely see the twins. But I could sure feel them. They did what they wanted with me. The three of us made every moment matter.

I woke up with the sun. They were still there. We stank like three used gym socks left under the bed. I reached for my phone and took a selfie of us lying together. Our time in tangled paradise was up.

I threw up three times and left. I had a flight to catch.

I limped to the airport with ten minutes to board. I looked like I had been chewed up in a booze blender and tossed in the street. People stared. I didn't care.

Everyone wore ties and tucked in their shirts. They all looked dead to me. The whole terminal was filled with walking corpses. I was probably just like them on the inside and, whatever, maybe even on the outside. But I didn't feel like it. There was a palpable distance between us. All I felt was space between what was me and what was everyone else.

I was alive on the memory of my German twins alone.

I boarded the plane. A nondescript man next to me ordered pretzels and buckled his seatbelt. I didn't know how he got there, but I felt like he took a more predictable path than I did. I hoped he smelled the sex on me.

We took off and rose above the mountains. I looked for the twins down there. How was anybody supposed to find them? How did I? How many times had I just missed meeting them? How many times had I gone to the car a second too soon? There was clearly something moving all of us along our own track in this life, but I couldn't decide what it was.

The city looked so small beneath us, the inhabitants moving in slow, miniature motion, like an ant farm burning fossil fuels. The whole thing looked programmed.

Everything moved freely, and yet nothing looked free.