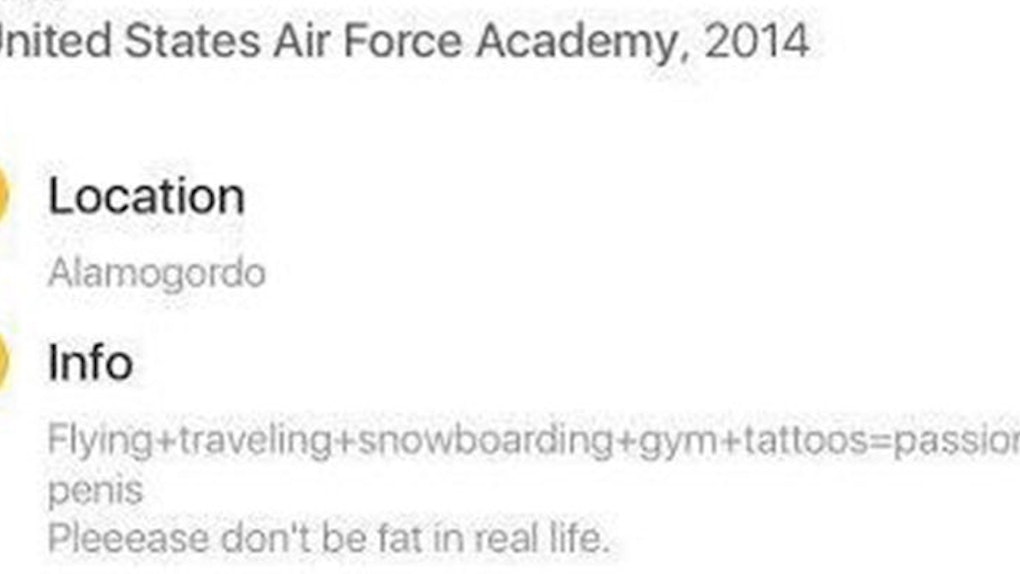 This week we have Angelina* who was ghosted by her Bumble date after he changed the bio on his profile to “Pleeease don't be fat in real life.”

This is not a drill, people. Read the story from Angelina herself below:

So I got ghosted by a guy after a first date. I normally wouldn't think anything of it — that kind of stuff happens all the time. However, there's a crazy coincidence that happened after he ghosted me that prompted me to submit this. So I matched with this guy from my hometown on Bumble when I was home for Thanksgiving. I live near an Air Force base, and he was there for pilot training. So we exchanged a few messages. He ended up asking me if I wanted to do anything the Saturday after Thanksgiving, but I had already left to go back to work. I gave him my number, and we exchanged a few text conversations over the following couple of weeks. When I get back in town, I texted him asking if he wanted to meet up for dinner, and he said yes. We initially had trouble settling on a day, due to his crazy work schedule. I left out a few texts because they were just boring, figure-out-what-restaurant texts. Here are the texts leading up to and following our first date:

Then, I tried to see if he wanted to hang out again once he got back from visiting his family, and he ghosted me.

What I thought was interesting was that I found a new Bumble profile he made. He added in at the bottom, "Pleeeeease don't be fat in real life."

Like, ummm, excuse me? I know it could have been about someone else, like from his hometown, but the coincidence is a little sketchy to me. So now, I want to publicly roast him for being a misogynistic pig. And by the way, I'm not actually fat. I can just squat, like, 200 pounds, so I have pretty thick thighs.

I normally try to select stories for this column that follow couples who have been talking for a while, but this one just really blew my mind.

I mean, the fact that this guy would even have that as his bio is already reprehensible enough, but the fact that he would coincidentally change it to that after his date with her!? EW. RUDE. GROSS. GTFO.

What do you guys make of all this? Do you think it was just a coincidence? I mean, obviously, he could have been referring to an experience with another girl, but STILL. Nothing makes it OK for him to publicly fat shame women.

Have you ever had an experience similar to this? Please share that, too! I want to hear any and all thoughts sparked by this.