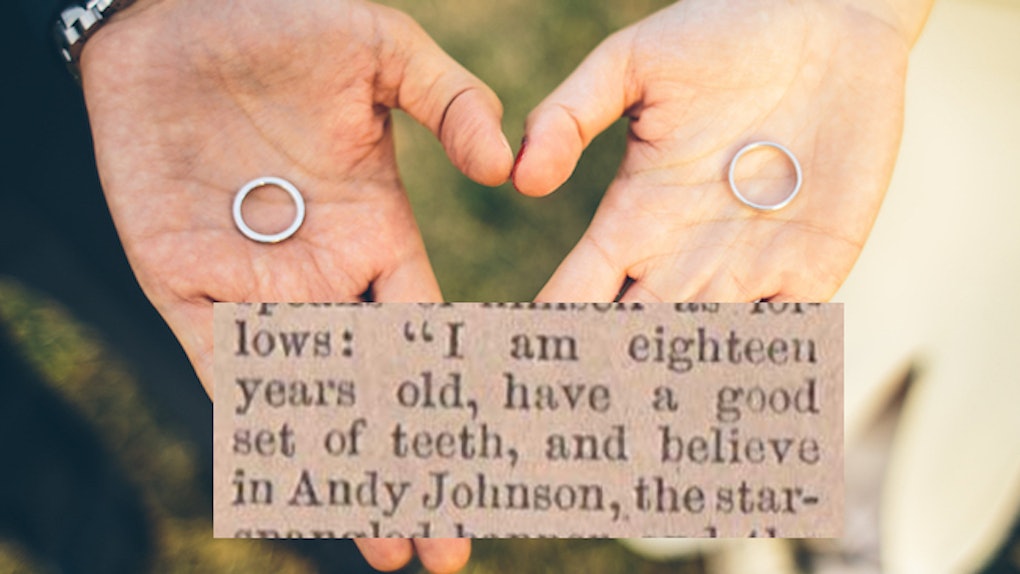 If you think dating now is hard, try looking for love as a single dude in the 1860s.

In a time without Tinder or cool, fun singles bars to hit up for a potential partner, really desperate singles had to resort to taking out an ad in the newspaper.

Yep, that's right. They literally had to pay to make a concrete announcement of their singlehood in the freaking town newspaper. Social suicide.

Just recently, Max Roser, a researcher at Oxford University, posted a photo of an ad posted by a man looking for a wife back in 1865.

Read along and REJOICE at this desperate weirdo's personal ad:

If reading it on the tweet was a little difficult, don't worry. I've got the ridiculous ad written out here for you:

CHANCE FOR A SPINSTER. A young man in Aroostook County, Maine, advertising for a wife, speaks of himself as follows: 'I am eighteen years old, have a good set of teeth, and believe in Andy Johnson, the star-spangled banner, and the 4th of July.  I have taken up a State lot, cleared up eighteen acres last year, and seeded ten of it down. My buckwheat looks first-rate, and the oats and potatoes are bully. I have got nine sheep, a two-year-old bull, and two heifers, besides a house and barn. I want to get married. I want to buy bread-and-butter, hoop-skirts, and waterfalls for some person of the female persuasion during life. That's what's the matter with me. But I don't know how to do it.'

Needless to say, I have lots of thoughts here.

First of all, he has a good set of teeth?

Honestly, when you think about it, I'm guessing they didn't have braces back then, so having naturally straight teeth was probably a pretty freaking dope accomplishment.

OR was everything else about him physically so bad that he just had to highlight the one semi-good thing he had going for him: his teeth?

Is loving the national anthem and believing in Andy Johnson the 1865 equivalent of dipping Skull and referring to America as 'murica?

Is he that guy?

Also, WTF are these hoop skirts he's trying to get the ladies?

Apparently, my research shows they're those big, poofy, uncomfortable, skirts women had to wear with a metal rings underneath them to keep them away from their legs.

And this winner was trying to buy some lucky girl one!

According to Google, that's a female cow.

It looks like there was no shortage of milk on this dude's farm!

Finally, is this ad even real?

A group of people on Reddit tried to get to the bottom of the most pressing question of them all: Is this even a real?

If you were too bored to read that whole thing let me give you a brief summary: The clip is probably real, and the story is could be real, but of course, we can't know for sure. This whole thing could be a sham.

Anyway, the point here really is THANK GOD we aren't living in the 1800s. Even in the age of Tinder and ghosting, our love lives are far better off than having to post a desperate ad in the newspaper bragging about your teeth.