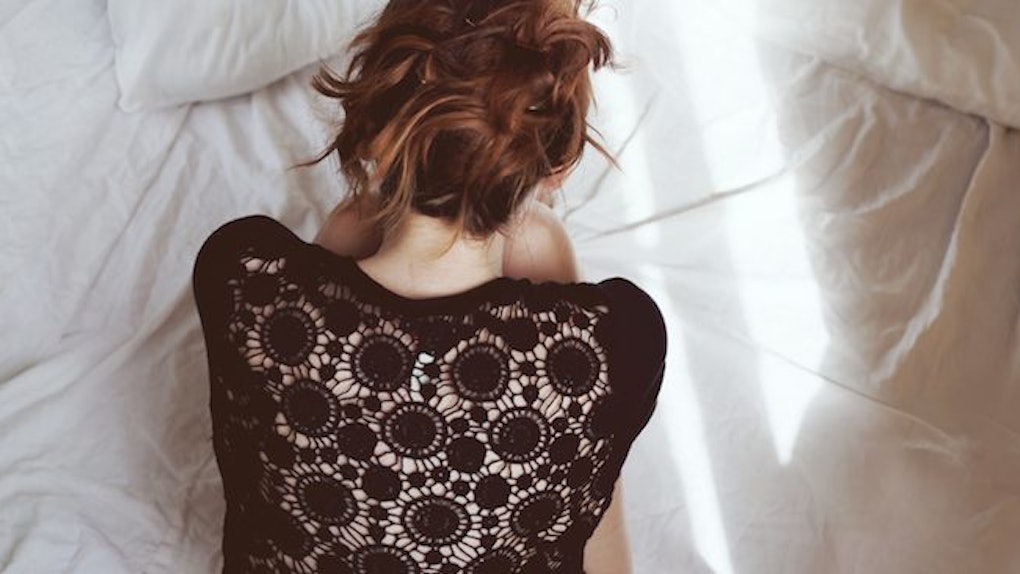 I have a below-average sized dick inside me in an above-average sized loft in SoHo. Like the sound of hands rustling around in popcorn during a movie, it's irritating, but I'm sitting through it until it's over.

How did I get here again? Having sex with someone I don't even like that much, making obligatory sounds like “ohhhh, it feels so good," and “ohmygah, ohmygah," when I'd rather be watching Girls on my laptop with Madison, my faithful teddy bear?

My rendezvous started with a simple text from Carlos: "Dinner at my place?” We met on Bumble and had moved the convo from the app messaging, which meant nothing more than I didn't want to toggle between screens.

Carlos was from Mexico City and was my first Bumble match after a bad breakup to warrant a second date. He was an emotionally intelligent banker that cycled on the weekends. He was slightly small for my “I like them big and brawny” taste, but talking to him was easy. He felt familiar.

“Sure,” I replied hesitantly. I was still feeling Carlos out. I liked him enough to meet for two hours over dinner or brunch, but wasn't sure about going to his place.

But I thought it would be all right have a date inside — or rather, off the streets of New York City. Although I think it's weird to make out on the street, at least it's safe. Not "safe" in the sense that you won't get mugged; you might. When you're dating in a public setting — i.e. a bar, coffee shop, or park — preset boundaries exist that prevent a guy from taking it too far. The social norms in place discourage most guys from trying to f*ck you in a restaurant, unless, of course, you're in a booth, and even then that would take some balls.

While dating in public, you're less likely to have to fend off a raging boner headed in the direction of your vagina, mouth, or anything else that provides friction. When you enter his apartment, it's another story.

Despite my apprehension, I went over to Carlos' place after work, where he prepared grilled salmon with couscous and asparagus spears courtesy of Blue Apron. I kissed him hello and sat down for his culinary masterpiece from a box. Conversation flowed, but I quickly knew I wasn't feeling the love for Carlos. I just wasn't attracted to him. I realized that the familiarity I felt was that he reminded me of my ex.

Yet when he kissed me, I kissed him back. We rolled around on his big couch in his big loft. I let him take off my clothes while he took off his own. The rest was history and fodder for this article.

“Why don't you like dating?” my younger sister always asks. “Meeting tons of different guys seems like fun.”

It's not that I don't like meeting people. I do. I actually thrive on going out with a variety of men. Dating just has me twisted because of freaking boundaries!

Simply put, boundaries are what set the space between where you end and the other person begins. My mother put up heavy boundaries, locking her bedroom door or asking us to knock before entering. She was private and had rules about us going through her things. She was a mom of three young girls and just wanted a little space for herself. I understand that logic now, but at the time, it felt cold and standoffish. I was her daughter and didn't understand why there had to be a line between us.

A boundary, by definition, is a line that marks the limits of an area. A dividing line. Why would I want a line that divides me and the person I love? My mom's boundaries didn't feel good when I was growing up. Therefore, I've always gravitated towards men and relationships where there are no boundaries. I was the girl who adopted all her boyfriend's interests and forgot who she was.

Although it would be easy to blame my mom for my discomfort with boundaries, it wouldn't tell the complete story.

My first year at college in Austin, I dated a guy named Chance.  He was from Dangerfield, a town in east Texas near the Louisiana border. He was six-foot-two and as all-American as it gets. He was the quarterback of the football team and accepted into the Naval Academy until adult onset diabetes took him out of the running. We were inseparable.

One night, I went out for a boozy girls' fest. I headed back to his apartment once the bars closed, and per our usual late night routine, jimmied open the window, but it quickly slammed on my fingers. Evidently, he had a female guest. I later found out he had been cheating on me for months.

The next morning, Chance knocked furiously on my door, but I didn't open it.

"Aubree, I'm so sorry. I was drunk." Chance begged for forgiveness while making a scene outside my apartment, so I let him in.

"It's over. Please take your things before you go," I said emphatically. My eyes were bloodshot from the late night of booze and tears. I loved him, but cheating was a deal breaker.

He scurried around my apartment, gathering his T-shirts, boxers and socks that had called my place home for over a year.

"I love you. Please don't do this," Chance said through his tears.

I was devastated, but steadfast. "Don't forget your dopp kit."

Personal items in hand, Chance turned to leave. But not before he beat the shit out of me.

I'm not sure how I ended up on the floor, but while I was down, he kicked me repeatedly with his all-white Adidas sneakers that he kept meticulously clean. I ran out of my apartment, but didn't know where to go. I had no other friends. Chance was my everything, but running to his arms right then didn't make much sense.

I headed to the campus police station where they took polaroids of my bruised and bloodied little legs, butt, and stomach. I was 19. I just wanted to break up with him, but he wasn't hearing no.

According the National Domestic Abuse Violence Hotline, a woman will leave an abusive relationship seven times before she leaves for good. Per the statistic, it took me a year to break free from his sick love. I didn't think I deserved better, but thankfully, that's not my reality today.

My preference for smothering-type relationships, often termed codependent, made perfect sense to me given my familial and romantic history. Boundaries hurt. When they were set with me, I didn't feel loved. When I set them, I was abused. So here I am, trying to figure out healthy boundaries to distinguish between what I will accept and what's a deal breaker.

Setting boundaries doesn't come easily though, especially with men. It's excruciating. Like with Carlos and more guys than I'd like to admit, I've found it easier to say yes. Part of me is still terrified of what could happen when I draw a line, but more than that, I don't want to hurt the guy's feelings. It's an awkward moment when I have to say no. I don't want to make a fuss. Perhaps it's a byproduct of being a woman? Whatever the root, it's crazy to think that my fear of offending a man could be stronger than the fear of going against my truth, which in the case of Carlos was that I didn't feel the spark. I wasn't turned on.

Yet as the imperfect story goes, I slept with him anyway.

What can I say? I'm a work in progress. That's OK, and exactly why dating is so important for me: It's the perfect forum to work out my kinks and refine my boundary-setting style. From asserting my needs to saying no, I can assure you my skills are less than graceful, but it's worth it. When I want to sleep with someone, I do. When I don't, I don't — even if it involves physically running far, far away from them.

I wish setting boundaries was as easy as saying, "Peace out" and going home to snuggle up in bed next to Madison. But that gets awkward. Either way, I know I'm exactly where I want to be. At least, that's the goal.