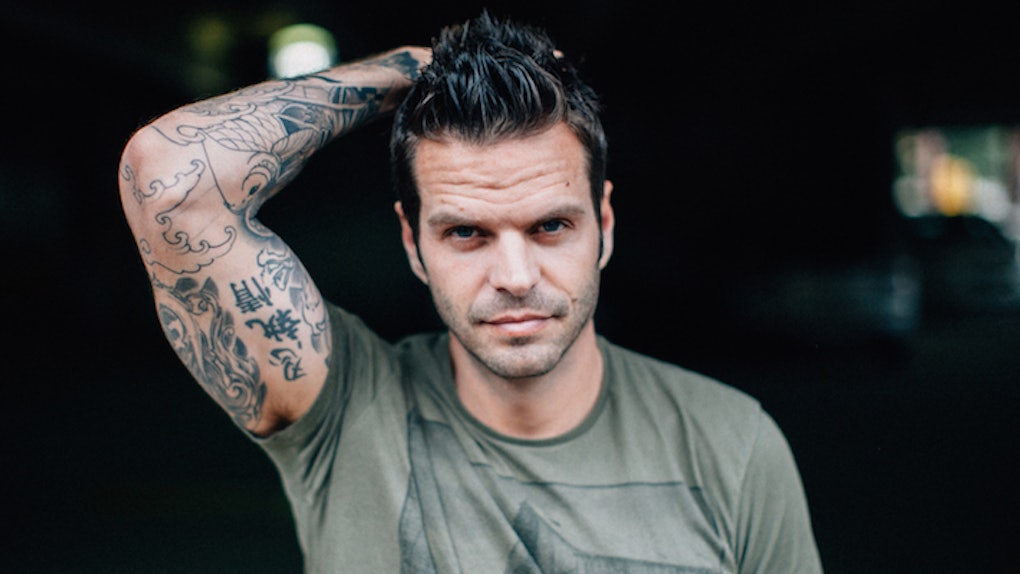 Tattoos are blatant statements of someone's soul and state of mind. While our mothers would shake their heads at any inked-up boyfriend we brought home, we just can't get enough of them.

There's something dark, mysterious and sexy about a guy who dabbles in body art. It's expressive; it had to be painful and it shows no fear.

There isn't anything wrong with choosing to get tattoos; it just takes a certain kind of man to indulge -- one who's romantic, artistic and a little impulsive.

Nothing can quite pull attention like the appearance of a well-pronounced tattoo, and nothing is quite as sexy -- unless he has a man bun and a beard, in which case you better put a ring on it, girl.

Forget what you were told, the guy with tattoos makes an awesome, passionate boyfriend. He wants to take a bite out of life and you'd do well to take one out of him.

Here are 24 completely logical reasons why you should date a guy with tattoos:

He looks like the guy your parents would have forbidden you to date in high school, but a man blotched in body art, weathered and worn in his 20s is one drunk with experience.

He wants to leave his mark, to make the world more vivacious. Just like the art he's expressed over his skin, he wants to paint a picture in the world, one where he's made a difference. He doesn't dabble in the vacuous.

Nothing says “commitment” like having a picture stamped to your body for life. When he makes a decision, he stands by it. He knows there's no turning back, no backing down at the last minute and letting someone down.

He's true to his word.

There's an enticing mystery in the story of his ink -- something vibrant and maybe a little damaging covering his beautiful skin in a patchwork of pictures.

He's always a question to be answered and will never cease to keep your attention with that dark shadow of a riddle.

5. He doesn't have a boring or conventional job.

You can't really work in finance with a full sleeve covering your hands. Someone who's inclined toward the ordinary wouldn't be the type to express himself through body ink.

A man who explores the world of tattoos is one geared toward a more artistic means of employment.

While this can often be seen as a bad and immature thing, it actually isn't. He simply isn't afraid to make mistakes. He likes to take things as they come and when he has an idea, he just rolls with it.

If he expresses himself with tattoos, he definitely has an artistic side. Many a sleeved-up guy is also an artist of some kind.

And he might also play the guitar… which, let's face it, is a complete panty-dropper no matter how old you are.

There's a certain air of romance surrounding a man with tattoos. Not the conventional Jane Austen romance, but something darker. It's an impassioned, severe romance -- one dripping in sensuality that's impossible to resist.

9. He looks amazing in a short-sleeved button up.

There's nothing sexier than a man with two sleeves in a short-sleeved button up shirt.

It's something about the dressed-up quality of the clothes with the unconventional, bad-boy body art that will have a lady panting in a matter of seconds. Add a man bun and/or beard to the mix… and phew.

He's manly and fearless. A little pain is never going to scare him. His typified masculinity is an extremely sexy quality.

A guy who can handle a needle being dragged across his skin for hours at a time in the name of art is a man worth dating.

11. He finds meaning in things.

He's an old soul. Even in the most straightforward, uninvolved situations, he can extract meaning. He sees life as half-full and doused in poetry. He may not be entirely easygoing, but his infatuation with life is an exquisite thing.

12. He's not scared of being imperfect.

Imperfection isn't a flaw to him. He finds imperfection even more enthralling than anything impeccable. He sees true beauty in things with rough edges, a few cracks and missing pieces. Perfect is just boring and simple.

He has nothing to hide and wouldn't want to. He might have done things in his past he isn't proud of, but he'd never cower in shame.

He's the kind of man who owns up to his mistakes and faces them head on. His past is just another part of the story that's helped to shape him into the man he is today.

The man with tattoos isn't prone to the callous and he isn't one to build walls. He's aware of his feelings, even if he doesn't wallow in them. He is inclined to human emotion — it's a display of masculinity he's comfortable with.

Even if it's in the abstract, he has a vision for his life and for his future. As much as this kind of man loves to live in the moment and experience everything with all of his senses, he still has dreams and aspirations he wants to work to achieve.

16. He's not afraid of a little color in his life.

He's colored himself up with his multiple tattoos and isn't shy about it. He's interested in complicated.

He doesn't shy away from the fiery and emotional because he can handle those kinds of feelings -- those kinds of layers -- in his world. They're part of life and he strives to ensure his world is brimming with variety.

17. He's no stranger to controversy.

A man with tattoos is not the type to fall through the cracks or go unnoticed. He's aware of the generation before him who think his tattoos are ridiculous and he's aware they think he's some degenerate. He embraces their judgment and doesn't give a f*ck what anyone thinks.

He knows how to handle himself.

18. He wears his heart on his sleeve.

Both literally and figuratively. His vision is in his tattoos and his heart is reflected in them as well.

A tattooed man is a complicated man, one who has seen a lot in this world and has taken a bite out of life. He's the kind of guy who has grown from the occurrences he's faced and gleaned many a lesson.

He isn't damaged goods; he has a stronger shell.

He isn't afraid to talk to be people and to make new friends from whom he can learn. He's open about his life and easily finds comfort in any conversation.

He always has a lot to say and will flourish in social situations. He's just easy to get along with.

21. He sees beauty in the obscure.

One of his most desirable qualities is his ability to find the beauty in the most abstract of places.

He sees things in such a fascinating, idiosyncratic way that you find yourself longing to get inside his mind and pull out his methods of comprehension.

There will never be a time when he can think in shades of beige. There is an undeniable intensity in every nook and cranny of his brain.

22. He has a history and a story worth listening to.

Someone keen on body art is rarely a boring person with a mundane past. This man has a colorful history. He can tell great stories with charisma that can take a girl's breath away. He's truly dynamic and multilayered.

He isn't constrained by the need to make things black and white. He doesn't worry about The Man and he doesn't answer to anyone.

He's sure enough in himself — confident enough in his own talents and abilities to know real success isn't measured by the amount of real estate you own or the size of your portfolio, but how richly you've lived life.

I said this about a man with a beard and it's no less true about guys with tattoos. This man is an intense lover, a dynamo in the bedroom. He lives for every moment and is extremely present in the throes of passion.