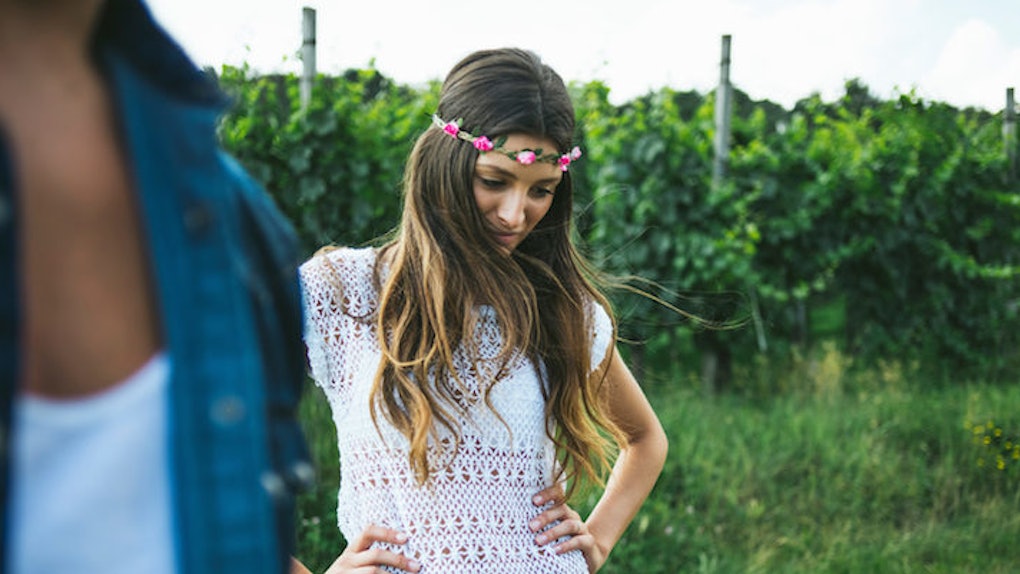 Why Do Women Feel The Need To Dumb Themselves Down For Men?

It was a rainy Thursday night in the Big Apple, which could only mean one thing: It was also date night.

A guy had picked me up at a bar a couple of weeks prior, so it was only fitting that we made plans for drinks at a bar that fateful Thursday.

Once we settled comfortably onto barstools, the alcohol began to flow, as did the conversation.

"So, what do you do, anyway?" he asked. "I was so distracted by your beauty that I forgot to ask what you do for a living."

“I’m a writer,” I said, laughing a fake laugh. I know his one-liner was supposed to flatter me, but all I could think about was how damn banal it was. Couldn't the guy come up with something better, something personalized, something more -- oh, I don’t know -- intellectual perhaps?

I had officially tuned out. The guy was cute as hell, but dumb as f*ck. I began to play with my wine, slowly becoming entranced by the liquid swishing up against the glass, back and forth. The rose was an obnoxious shade of pink -- that girly-girl kinda pink -- and it tasted drier than the way my crude sense of humor feels at first listen.

Sarcastic Sheena was dying to come out. She was practically bleeding out of every orifice. But she withheld. She stayed silent because she didn’t want to have to explain the million-and-one things wrong with his method of complimenting.

But, more than anything, she stayed silent because that night, sitting pretty with someone beat sitting in my room all alone.

Still, what damsel-in-distress Sheena was saying and how loudly she was giggling hardly aligned with what I was feeling. All the while, I actually felt like a badass mother f*cker who really just wanted to have a stimulating and challenging conversation.

And I knew, in that moment, I was dumbing myself down for a man.

I know I'm not the only girl who's ever done this.

A coworker told me a story about a girlfriend of hers who once lied about her SAT score to a guy she'd been hooking up with at the time. She scored a 2300 -- a number higher than her hookup’s -- and she later admitted she lied because she didn’t want to make her hookup feel small.

Every woman has portrayed a “dumber” version of herself, whether it be an isolated incident of the past or a habitual occurrence. And we often do it without even realizing it. Diluting the water, we suppose, makes it easier to swallow. Murky water is rough, complicated and not worth swimming through.

We pretend to know less than we do. We twirl our hair and raise our voices an octave. We think behaving this way is embracing man's idea of femininity, when really, maybe we’re embracing our own insecurities, or fears, or vulnerability.

So, what's our end game? Why the hell are some of the smartest women I know appealing to the dumbest versions of themselves?

It’s painfully easy to do.

Sometimes, I do it because a guy just operates on a different level of intelligence (see anecdote above).

I can't count how many times I've exclaimed “Oh my gawddd!” to emphasize just how funny (read: unfunny) some dude’s unexceptional story about getting drunk and doing something stupid with his friends is.

Other times, though, I do it because I know it'll pay off. We’ve been taught that being feminine and appealing means being complacent and passive and helpless. We have to let a man “be a man,” which means letting him take the reigns in the conversation and come to our rescue.

So getting what we want becomes as simple as solving a math equation: Acting adorably incapable of completing a simple task at the bar + a man’s need to boost his ego = a free drink and some special treatment. A + B = C.

Dumbing yourself down is like pulling an old sweater over your head. You can take it off at any moment, but having that power of choice to be yourself or play dumb is wonderfully delicious.

Men want the girl who's the perfect package, meaning someone who isn’t going to upstage them, right? So that would probably be the girl with Jessica Alba’s face, Kim Kardashian’s body and Taylor Swift’s personality.

At least that’s what we’re trained to believe.

It’s all about striking that perfect balance between beautiful and smart, but still approachable. God forbid we’ve got the abrasive wit of Amy Schumer or the boldness of Jennifer Lawrence.

Because, I mean, no one wants an intimidating know-it-all… or so I’ve been told.

Loneliness is that elephant in the room: We all see it, and we all feel it to some extent, but no one wants to talk about it.

Still, our omission of the “I’m lonely” conversation about it doesn’t make the fear of it any less real.

I was afraid I wouldn’t find someone else that I’d like even half as much as cute bar guy ever again (hey, it’s been a rough year, okay?), so I stuck around in something that filled half of the void in me instead of the whole thing because feeling half-fulfilled, I figured, was better than feeling completely empty.

We don’t realize that being ourselves is enough.

I hoped I could keep a man by being the kind of girl he wanted. But my thinking was flawed and my desires, wishful. I can’t change who I am any more than I can change the weather.

The thing about quelling your smarts for the sake of appeasing a man is your intelligence will only atrophy. Being a brainiac is nothing to be ashamed of.

You may lose a handful of men along the way, but that doesn't mean you're unworthy; it just means the men you chose couldn't keep up. So use that brainpower or risk losing it.

That's the way I see it, anyway. One day, I’ll meet a man who isn’t scared off by me: That is, he won’t accept a quarter of me, or a half of me. He’ll accept all of me.