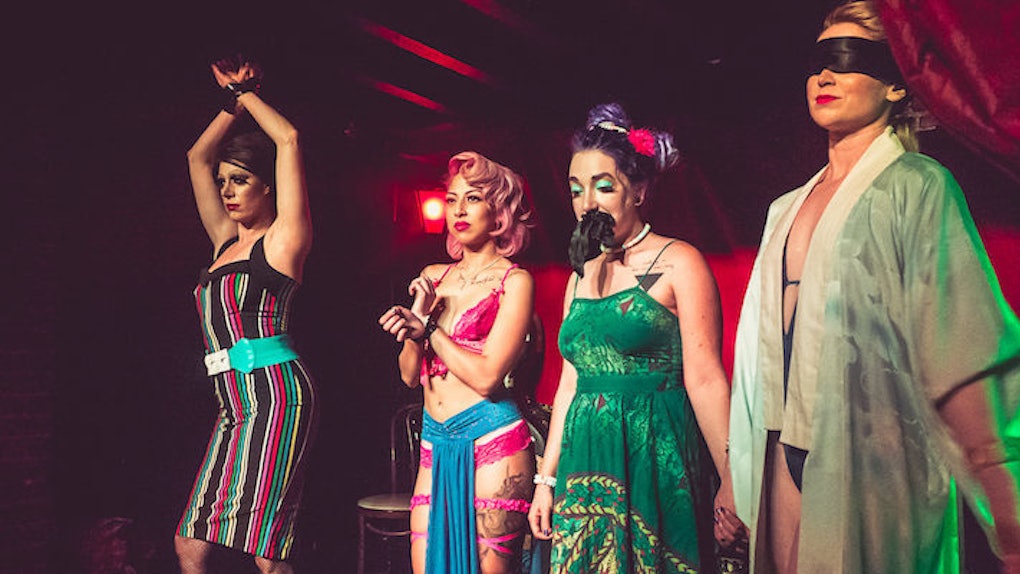 Just Ask Snatch Adams, Women Who Do Burlesque Are The Ultimate Badasses

To the tune of Major Lazer's "Bubble Butt," we watch, mouths agape, as her body disappears inside a giant white balloon. The imprint of her hands pressed against the rubber, the way it bounces, egg-like and in sync, all place the moment somewhere between performance art and alien birth.

On cue, the balloon pops as the final "bubble butt" echoes through the small bar, exposing her kneeling on latex fragments, her hands raised in a half-hearted shrug as if to say, what did you expect?

Let me start over.

After spending the day fighting our way into the 420 crowd on Hippie Hill in San Francisco's Golden Gate Park and then fighting our way back out, we fled for the Golden Bull in Oakland where Haus Serpens Cabaret was hosting an "Eating Erogenous" burlesque show. Few things sounded more perfect to balance out an altogether slapdash day.

Too many men, too few shirts, one gold-sequined hanky hung precariously on an otherwise exposed penis, were enough to leave me frazzled.

A friend of a friend of a friend would be performing that night -- what, I did not know. My idea of burlesque had always revolved around bejeweled pasties and tasseled, bare breasts. Those types of shows did not top my list of places to go when you're looking for low-key, feminist good times. It'd never registered as something I'd seek out, apart from pure novelty and kitsch.

But on a Wednesday night, sitting in traffic on the onramp for the Bay Bridge with pot smoke still looming in the distance, the only question on our minds was, why not?

We arrive to find the entrance to the bar flanked by two vendor booths, one for pinup girl calendars and one for self-defense classes and blinged out tasers. The Facebook invite listed the themes of the event as "Hunger, Power Exchange, Punk Rock Pulchritude and High Fashion F*ckery."

A corseted woman in cat-eye glasses walking around the bar with a silver platter of strawberries stops to offer us one because we look "ravenous."

We've come to the right place. After grabbing a few beers, my friends and I find our spots near the foot of the stage where the show is about to pick up again. While settling our tabs, we catch the end of a performance in which a blindfolded woman was slinging a bat around another woman wearing a unicorn piñata for a mask.

While waiting for the next act, we pick taffy pops and Tootsie rolls off the ground that had been flung in a sugar-coated, if not dramatic denouement.

Officially rapt, we watch as a woman approaches the stage in a striped, referee-esque outfit, carrying a white material that looked like a deflated saddle.

This is where Snatch Adams comes in.

Using a balloon she found on Amazon for $20, she first blasts her face with a leaf blower before inflating the latex to a monstrous size. Later, she'd tell me she practiced her routine for the first time that day in front of a super stoned couple in the park near her house.

Not wanting to suffocate inside the rubber bubble, she asked them, "I'm gonna use this leaf blower to blow up this giant balloon and then get inside of it. If I start screaming will you guys pop it?"

Twenty minutes later, when she emerged, she found the couple staring at her, dewy with sweat and wide-eyed with panic. "Dude," one of them said, "You gotta have a safe word or something. We had no idea what was going on in there!"

Watching her now, I am equally mesmerized, though slightly less afraid. She mimes shooting air up into her vagina and the crowd erupts with cheers and applause.

Snatch says she's always been a clown. Starting with a youth traveling circus at the age of 13 and working her way up to a non-youth circus by 17, she made her way to San Francisco where she graduated from the Clown Conservatory. It wasn't until she saw her first burlesque act at a housewarming party in Oakland that she was hooked.

Merriam Webster defines burlesque as "mockery usually by caricature" and "theatrical entertainment of a broadly humorous often earthy character consisting of short turns, comic skits and sometimes striptease acts." Popularized in the US in the late 1800s and early 1900s, most burlesque acts featured low-brow male comics accompanied by a troupe of female strippers.

What was largely sexist and demeaning to women before has been reclaimed by Neo-Burlesque performers like Dita Von Teese and *BOB* who flaunt their sexuality while mocking outdated tropes.

Standing in a crowd dominated by women cheering on female performers unapologetically expressing themselves, represents, to me at least, the culmination of a thousand-year battle to seize ownership of our own bodies and spirits.

There's a flexibility to burlesque that you can't find in mainstream entertainment. And, according to Snatch, it's not so much about celebrating femininity as it is redefining it. She says,

For the last act of the night, Vesper Synd struts on to the stage in six-inch stilettos and a skintight cocktail dress. One minute, she's pretending to down a handful of pills with a martini; the next, she's ripping off a tablecloth to reveal a near-naked man tied up in ropes before smearing cupcakes and frosting all over his body.

An EDM song plays, repeating the lyrics like a chant, "perfect wife, perfect life," and I am at home.

At the intersection of sideshow and subversive performance art, we find relief in a collective release. Because nothing slams a history of systematic oppression quite like binding a man and having him wolf a cupcake off your ass. Nothing satisfies like unbridled self-expression.

As Queen Bey herself would say, "I got hot sauce in my bag, swag."