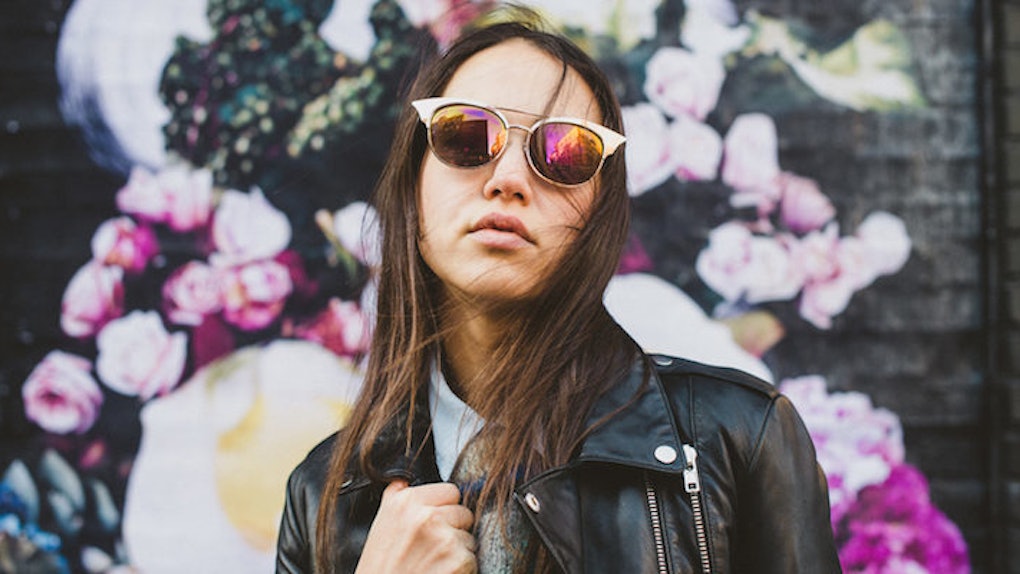 I'm, like, so sick and tired of middle-aged white men telling me what I can and can't say.

It all started in a required public speaking class in college, taught by a dude who insisted on wearing the baggiest suits known to man and never trimming his mustache evenly. He was also pushing 60, but I digress.

From the very first day of class, he loved to pick on me because I followed every preposition with the word “like.” I also used what he called “linguistic crutches,” like “um,” “actually” and “literally.”

Throughout the class, I stumbled. While I consider myself fluent in English, it is still my second language (my first is Russian). It can take me a little longer to summon the right words than it would a native speaker. To combat this, I use those "crutches," which also include “at the end of the day,” “seriously" and curse words. Lots of curse words.

I'm not saying that if I were a native speaker, I wouldn't ever say "like" or "um." But at the end of the day (see?!), I don't have the verbal speed of someone raised in a home where English was spoken all the time. In fact, I'm the only one in my family who is fluent in English.

Anyway, back to this professor. From the beginning, he tried to convince me talking the way I do actually (oh, look, another crutch) diminishes my meaning. It was making me less powerful, he said. The TA, a woman in her mid-30s, agreed.

Apparently, my tendency to use “like” and “um” usually falls into the category of a "linguistic insecurity."

The fact that I sometimes throw in an additional word to fill silence reportedly indicates I'm insecure. Saying “you know” allegedly means I'm less sure of myself, less powerful and don't know what the hell I'm talking about.

Contrary to linguistic popular opinion, I feel confident regardless of how I phrase something.

I wouldn't have opened my mouth if I couldn't back up what I said. Plus, according to a study by the University of Texas, all my "likes" and "uh"s actually mean I'm more thoughtful and aware.

If you automatically delegitimize what I say because I threw an “um” in there, the problem isn't the way I said it; it's the fact that all it took was one stray word for you to disregard my opinion.

You shouldn't care that I speak in questions.

That same public speaking professor said I rely an awful lot on uptalk, which is when pitch rises at the end of a sentence, similar to the tone of voice one would typically use to ask a question. Apparently, that's bad.

Just like I shouldn't have to wear a Hilary Clinton-esque pantsuit to be considered powerful, I shouldn't have to “speak like a man” to be taken as seriously as one. Here's a wild idea: Maybe you should take my ideas, thoughts and concerns seriously, regardless of the pitch or tone of voice I use when I say them.

Uptalk is one of those things that get constantly fretted over by both men and women. In fact, the tendency to uptalk is considered so detrimental to the speaker's value that it can damage professional credibility and cause missed promotions.

Do we think it's a coincidence that while lots of people uptalk, it's primarily women who are losing opportunities based on the way they speak? Who decided uptalk denoted a lack of confidence, anyway? According to an article from Slate, men in Belfast, England are the ones uptalking. So, is it about the uptalk, or about the mouth it's coming out of?

Of course, there's also a social conditioning element to all of this. Maybe I wouldn't frame everything as a question if people took my statements seriously. Maybe I present ideas as questions because I'm used to being interrupted by men.

Maybe the problem is you, not me.

The issue at hand isn't my uptalk, linguistic crutches or even my tendency to favor certain words. It's that our society has decided these are indicators of feminine speech, as well as something to change.

Instead of trying to change the way I speak, I embrace it. It doesn't bother me that I curse, say “like” or speak in questions, so why does it bother you?

I don't need your vocal coaching to know I am worth more than the way I verbally articulate myself. I am comprised of my ideas, thoughts, desires and needs, so don't tell me what I have to say is not worth your time just because I didn't say it the way you wanted me to.

Besides, like, maybe the fact that I'm confident in the way I speak should be enough for you to, like, take me seriously. Right?