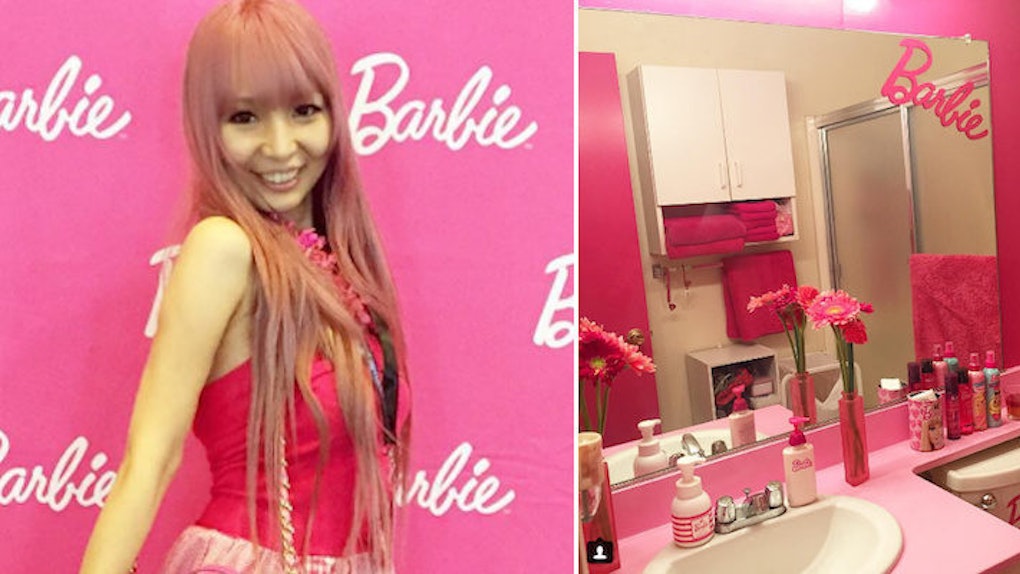 Feel Better About Where Your Money Goes, This Woman Spent $70K On Barbie Stuff

Even if you think you've grown out of playing with dolls, Barbie really knows no age.

And for Azusa Sakamoto, who has been a fan since the ripe age of 15, there are no limits.

She plays with Barbie in the most mature way possible, which is buying all of the doll-inspired shoes, clothes and home furnishings she can afford. And with her budget, it's quite a bit.

This LA-based nail artist has spent over $70,000 turning her house into a real-life Barbie mansion. She owns 145 Barbies, 40 pairs of shoes and 60 bags — all Barbie-themed.

In the video, she tells Daily Mail,

If I was asked to choose between a man and my Barbie stuff, I'd pick Barbie.

Her boyfriend — whom I hope is named Ken — is apparently extremely supportive of her, um, passion (a very expensive one, at that).

She insists she's not trying to BE Barbie (we've already talked about the model who is trying to do that). She knows how important it is to be yourself, even if being yourself means living in a real-life Barbie mansion.

Whatever floats your Barbie Glam Boat, you know?

I know what you're thinking: How is there even $70,000-worth of Barbie stuff to buy?

Here's exactly how she has spent that much:

Damn. You can check out her Barbie life on her insanely pink Instagram.

Her nail art is insane.

If the stuff she buys isn't Barbie brand, she brands them herself with stickers.

Do your eyes hurt from all the pink yet?

Yeah, that's a Barbie sticker on her toilet.

You're not a real fan unless you have a Barbie nail station.

OK, I can't judge Sakamoto too hard. Passions can be expensive.

For example, I love snowboarding. If you added up the cost of my passion over the last 10 years, I'd estimate I have spent between $5,000 and $10,000 alone on trips to resorts and new snowboard gear. And that number will only continue to grow as I get older.

Maybe one day, someone will make a video about me like, "Woman Spends Entire Life Savings On Snowboarding, Lives Her Best Life."

You keep doing you, Barbie girl.

Citations: Is this Barbie's biggest fan? US woman spends $70,000 turning her house into a shrine for the doll (despite being 34 years old) (Daily Mail)