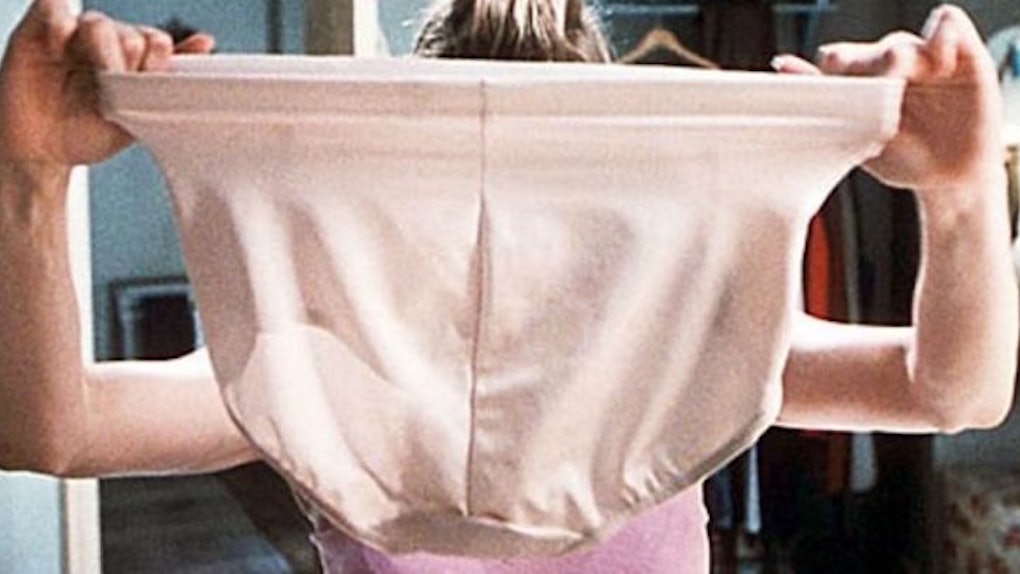 In Defense Of Wearing Spanx, Whether Your Date Likes It Or Not

For the first time in my life, I decided to take a date along to a press event. It would be the only time.

It was a holiday cocktail party for a jewelry brand, so we were dressed well; he in a suit and tie, me in a form-fitting dress and a pair of heels. We looked a lot more legit than we felt, and couldn't stop giggling at the admittedly bougie-as-f*ck crowd.

“What are those?” he asked, pointing to my stomach.

I looked down. I'd forgotten I was wearing a pair of high-waisted, nude Spanx briefs underneath my dress.

“My underwear?” I said, trying to make light of the situation. Sure, they weren't exactly a sexy pair of undies, but they were far from granny panties. At least they made my ass look hot.

My date was unimpressed. At this point, he seemed annoyed. I was starting to debate pulling my dress back on and waltzing out of there, Spanx and all.

Finally, he muttered: “I hate those things."

I was intrigued. Offended, yes, but my inner journalist was interested in learning the source behind his disdain of my tummy-controlling underwear.

I was floored. Lying? Fake? Also, did he just call me fat?

After a few choice words and finger-pointing, I stormed the hell out of his apartment. I was livid, furious, and my apparently fat ass deserved better.

Here's the thing: I love Spanx. I love anything that minimizes my tummy or whatever else is bothering me that day. I also love my body. The two aren't mutually exclusive entities.

Spanx and other shapewear exist to make me look better in clothes. If I'm wearing something tight or something that would draw attention to my curvy tummy or my love handles, I'll wear Spanx to create the illusion of a balanced, symmetrical body.

It's the same reason I wear makeup: to draw attention to the parts I like and detract from those I don't. I feel more "myself" with a bold brow or with a winged line, just like I feel more "put together" when I'm wearing a pair of Spanx. It makes me feel more confident. Is that so bad?

See, here's what my date didn't understand: Shapewear is for me. It's not for him. It's to make me feel more comfortable in my clothes. If he doesn't like that, he can shove his opinions up his own ass. I don't comment on his boxers, and he shouldn't comment on my tummy-tucking underwear. It's only fair.

I don't wear my Spanx every day. I only bust them out for special occasions. Frankly, I'm impressed by women who can handle wearing them every day because they're about as comfortable as rocking a straitjacket.

In the end, I hightailed it outta there not because my date essentially called me fat or fake, but because it's none of his damn business what I wear underneath my clothes. It shouldn't matter whether I'm wearing an edible G-string or a chastity belt; if he's not happy that he gets to see my underwear in the first place, he doesn't deserve to see it at all.

Plus, if both JLo and Kim Kardashian wear them, I think I'm in good company. Or, at least my "fat" ass is.