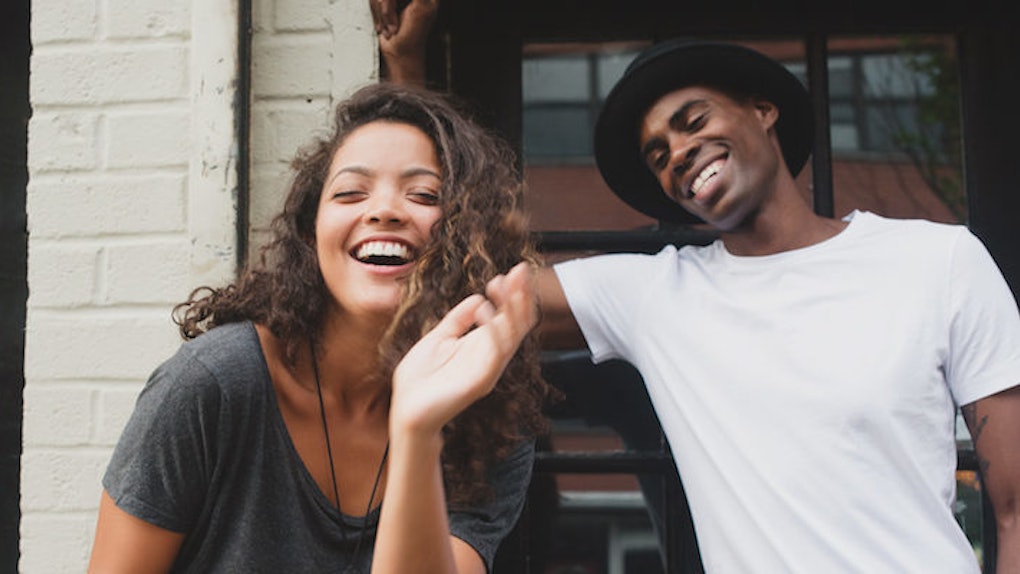 With the help of Destiny's Child and Taylor Swift, I've been all about girl power for quite some time.

But, no matter how fulfilled I am with my all-lady squad, my inner circle would never be complete without a platonic guy BFF.

He's not only one of my dearest friends, but he's also a wealth of refreshing honesty my homegirls can't always provide.

Trust me, I keep a pretty blunt group of gals by my side. Still, they never quite keep it 100 when I'm being batsh*t crazy over a boy.

Friendship with a guy, on the other hand, never comes with a heap of half truths.

Let's be frank. When you're in search of some raw, slightly brutal bluntness, especially when you're single, look no further than your guy BFF.

He lets you know when you're being crazy.

Your closest girlfriend will joke that you're being crazy with a lighthearted quip.

Even if she knows you might need to add a straight jacket to your wardrobe, she loves you too much to tone down your Amanda Bynes-like behavior.

Your guy friend, however, will serve up a filterless "yo, chill" to bring you back to reality.

He tells you when a guy's out of your league.

Though your girl will encourage you to pounce on the hottest guy at the bar after you've guzzled enough liquid courage, she may be unintentionally setting you up for failure.

Your guy BFF, however, is only trying to save you from making a huge mistake.

Your man won't cockblock your pick-up game, but he'll tell you if a guy is too Matt Bomer-perfect for your real-guy preferences.

He reminds you to stop freaking out over missing a sample sale.

Though your girlfriend may not necessarily care about the clothes you wear, she won't tell you to STFU. Alternatively, your guy BFF will shut down your fashion rants.

Bottom line: He does not care what you wear.

He tells you everything you did wrong in your last relationship.

The Thelma to your Louise won't question why you still hate your ex from three years ago.

She simply will loathe his existence because you do.

But, the best part of having a bro in your corner is that he won't jump to your defense for the hell of it.

Yes, he's on your side no matter what. Still, he's neutral enough to expertly explain how you nagged your ex into the next woman's arms.

He even accurately expresses how bad you suck at being single.

He laughs about you eating like a 17-year-old boy.

Don't be alarmed. Your guy friend f*cks with you enough to call out your three orders of french fries.

However, he's not judging you.

He's just making sure you're not eating them all by yourself.

He brings you back to earth when you're daydreaming too much.

As you're scribbling your first name with his last, your main b*tch will join in.

But, your male soulmate will remind you that you can't fall in love with a guy you've only gone on one date with.

He tells you when a guy just wants sex.

No matter how many dates she's been on this week, your girlfriend can never quite gauge a guy's motives. Though, she'll try.

The Will to your Grace, however, will decipher a potential suitor's borderline booty call texts and stop you from getting your heart involved.

Just to have sex with him.

He lets you know you're not the Kim K of the selfie game.

While your girl BFF will put heart eyes under your slightly weird Instagram pic, your guy friend is not so considerate.

He'll most likely add a comment such as, "Could you be any closer to the camera?" under it just for good measure.

He'll agree when you say you've packed on winter weight.

Your guy friend knows better than to join your in your self-conscious rants about the five pounds you've gained in a week.

Still, if you ask him if you've gotten more plump, he'll keep it real.

He reminds you to stop taking yourself so seriously.

Guys are focused on the fun parts of life.

Anything too complicated or dramatic should be immediately eradicated.

Your girlfriend may spiral with you when you're freaking out over your shitty job, but your guy BFF reminds you to just enjoy life while you can.

When you need some space.

Guys have the magical ability to know when you're being weird and want nothing to do with it.

Girl friends tend to poke until they know why you've gone ghost.

Still, your guy BFF will skate and let you deal with whatever's got your flipping out unnecessarily.