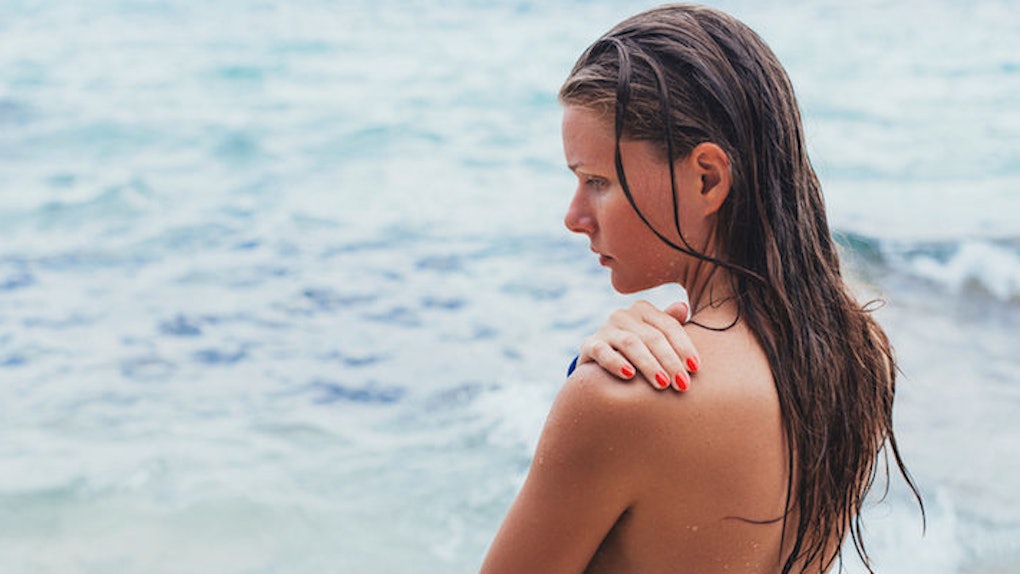 Last weekend, my boyfriend and I had a small party of 20-somethings at his house. We’re from Arizona, and as on most July days, the temperature had reached over 100.

Most of the group inevitably found their way to the pool, and under the influence of strategic shadows and a batch of green, jalapeño-margarita-flavored Jell-O shots, we were feeling weird and beautiful.

After some encouraging words about positive body image, a couple of the girls untied the tops of their swimsuits and threw them toward the deep end.

Though I’m a proud feminist, that night wasn’t about imposing views or bodies. Despite plenty of interaction between the genders, our friends “barely noticed” women were topless.

They took it as a sign everyone was happy. “We were too busy having fun to ogle and critique the naked breasts of my friends and peers,” one friend explained.

Unfortunately, even the best night-swimming has to eventually come to an end, so I got out of the pool, threw my soaking top over a chair to drain and put on “Margaritaville” cause I was feeling shameless.

Then, my boyfriend’s brother, John*, came outside, and things took a turn.

John does not live in the house, nor is he a friend of the feminist movement. “I’m going to ask that you put your top on,” he demanded, slowly, condescendingly. My body was incredibly “disrespectful.”

As I tried to drain the sopping wet swimsuit top, he moved a little closer. “Immediately,” he kept commanding, after I asked permission to wring it out. “It’s disrespectful to this house!”

I reminded him, as I struggled to tie the top, that his decision to look at my body and treat it as a foul, disrespectful object was his decision alone.

The anger on his face, inches from mine, is seared into my memory… his voice growing increasingly tremulous as he lost control of it.

By the time my boyfriend and cousin became aware of the situation and offered me support, all his control was gone.

The conflict that had started with me standing on the pool deck asking to wring out my top ended with John laying hands on both my defenders and shrieking at us to “get the f*ck out of the house” that was not his.

Whose body posed the bigger threat?

Unlike the physically imposing presence of this man standing inches from a half-naked woman to scold her in a way that foreshadowed the violence he’d instigate, my breasts were no public menace.

I truly regret if I made someone feel uncomfortable. And while I don’t want to condemn anyone for sharing this set of beliefs, the reasoning needs to be examined.

I could spend all my time explaining how breasts and nipples are not sexual organs and are no more sexual than an Adam’s apple (and they’re not), but the problem’s bigger than that.

When I told my uncle the next day about how I’d feared for my safety, he joked, through a window in his frustration, “You mean a straight boy saw a girl in her 20s without a shirt and got angry?” But maybe there was some real insight there.

Whether he knew it or not, what really made John upset, then violent, wasn’t that he saw breasts. Breasts sell the products around us, and hell, any man who's had sex with a woman has likely committed much bigger “crimes.”

Just like many unenlightened people, he was upset that the control of the female body before him was not his or for his benefit.

Let me explain where I’m coming from: Since I was 12, my body has been on display by no choice of my own. I was catcalled almost every day I walked home from high school.

I have my body leeringly scanned by men of all ages on a regular basis. If I dare to run to the store without a bra, men try relentlessly to make eye contact with my nipples.

Society has decided that just about anyone is allowed to violate my privacy by sexualizing and “undressing” my body.

But, when I take control of how my own body is handled, when it’s revealed, it becomes an outrage -- and my responsibility to protect the world from seeing the evils of my terrible little 32Bs.

Last weekend, I decided (with much less of an agenda than I will have the next time I decide to free my nipples) not to be ashamed and to take charge over how my body was perceived.

The audacity in that simple gesture of personal control -- over a body that’s been treated as a sexual plaything by outsiders since before I hit puberty -- made a man angry. He’s far from alone.

Can we decide to stop fearing women’s bodies? “To me,” my (notably straight male) friend wrote after the party’s unfortunate demise, “topless women at a gathering like that is neither disrespectful nor arousing but a sign that everyone’s comfortable and having a good time together.”

The next party I throw where the Arizona heat forces me into the pool, who knows if I’ll strip down?

All I can hope is that the people surrounding me aren’t scandalized or -- yes, I’ll say it -- titillated by the sight of my body.

As long as you fit that description, you’re welcome to join me.

Free the nipple! And then free a few more.