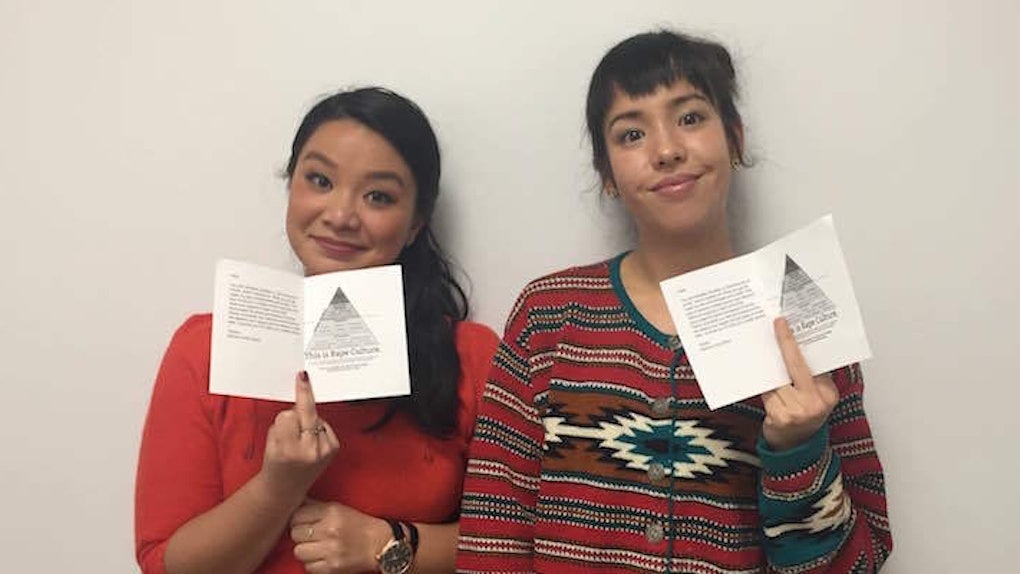 Rape culture is a slinky, quiet, insatiable beast that attacks women everywhere. Sometimes, it moves silently and without much notice through the streets at night.

Other times, it makes a loud roar on TV, in your workplace or even in the White House.

Its impact is deep. And to fight an opponent this large, we need an army of educated, proactive and brave women to lead the way. People like comedians and great IRL friends, Nicole Pasquale and Iliana Inocencio.

Pasquale is host of the comedy show, "Woke AF," a variety series performed every first Thursday of the month at 11 pm at The Upright Citizens Brigade East Theater in New York City.

The show aims to bring more diversity to the comedy space and gives performers and guests a platform to talk about important social issues.

For the Thursday, December 1 show, Pasquale brought her friend Inocencio on as a special guest to share her inspiring commentary on rape culture, as well as the amazing card the two created together to help solve the problem of catcallers and sexual harassment.

True, you're probably wondering why two comedians would cover such a serious topic. But when you hear them out, it makes total sense.

Here, they explain the card, the inspiration behind it and how every woman can use it in their every day lives.

The card (shown below), which is meant to be handed out to catcallers you encounter on the street, features a scripted note to the harasser and a pyramid diagram explaining the transgressions of rape culture.

On the left side, you can see the scripted message clearly communicating everything the girls would want to say to a harasser: It explains how their actions made them feel unsafe and is the kind of behavior that defines and fuels rape culture.

On the right, the pyramid breaks down examples and behaviors that all fall under the definition of rape culture.

These acts range from passive aggressive, sexist comments to full-on physical attacks. ALL perpetuate the shared acceptance of forcing individuals — predominantly women — into physical and emotional places of discomfort, violence or submission.

Inocencio and Pasquale made the card after Inocencio was catcalled by a truck driver one day, which sparked a frank discussion between the two friends about how to respond to sexual harassment.

"[One friend of ours] has a rehearsed thing she always says, and another friend takes pictures of everyone who catcalls her," says Pasquale. "I was just trying to find my way of, 'How can I communicate?'"

This card is also for women to realize 'this is wrong, and I have a right to say something about it.

"When it's just you standing alone, it's hard to get out what you want to say and get them to listen to you without getting angry or upset," adds Inocencio.

She recalled seeing the pyramid originally on 11th Principal Consent, but "it was Nicole's idea to write the message."

"As much as this card is for cat callers, this card is also for women to realize, 'This is wrong, and I have a right to say something about it,'" says Pasquale.

And nothing about it is funny, either.

Which begs the question: What inspired Inocencio and Pasquale, two comedians, to lead this crusade against rape culture?

Well, the two agree that right now, it's better to focus on what's important rather than what's silly — especially as artists who are fortunate enough to have a platform to stand on.

"I think as women, and women of color, too, you kind of just have to do something about it," Inocencio says. "People need to be informed while the get their entertainment."

Pasquale adds, "I love doing the sillier stuff — the stuff that we usually do — but it's just not attracting me right now. I'm a little less afraid to fail right now because there's just more at stake."

How To Use It

Recently, Inocencio was catcalled by a FedEx employee who was standing on the street with a group of his coworkers.

When she approached the group and asked which man shouted at her, the catcaller confidently identified himself. So, Inocencio walked over to him, handed him the card and said, "Happy Holidays."

I think as women, and women of color, too, you kind of just have to do something about [rape culture].

"When I looked back, all of [the guys] were surrounding the paper," Inocencio recalls. "It was the most validating thing because it wasn't just one guy — it was everybody."

The girls purposefully left the front of the card blank in case women wanted to personalize it. "If you want to add a big middle finger on it, be my guest," Pasquale says.

Download the image below, print out ALL the copies to hand out and go get em, ladies!