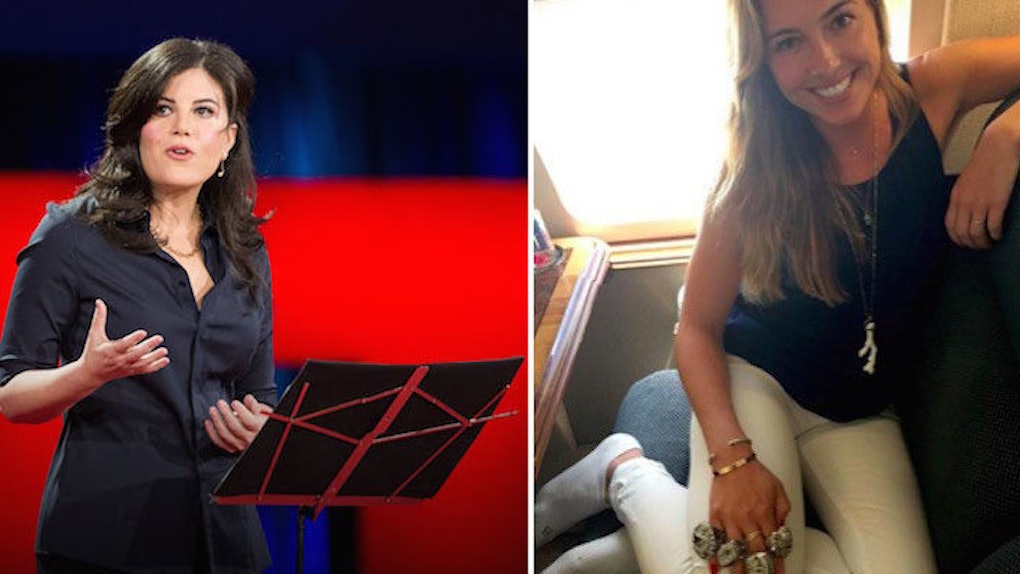 Nannygate: How Christine Ouzounian Is The Updated Monica Lewinsky

There's more damaging evidence surrounding Ben Affleck's alleged mistress and former nanny, Christine Ouzounian, than the OJ Simpson trial. Though wrecking one of Hollywood's favorite couples is enough to crucify her publicly and tarnish her name indefinitely, she’s being celebrated like a virgin bride during the hora.

Like President Clinton's intern and subsequent side chick, Monica Lewinsky, Affleck's au pair has been accused of enjoying additional perks outside her job description's parameters. A detail unknown to Ben's wife, Jennifer Garner, until the 28-year-old Arizona State graduate was snapped on a private jet to Las Vegas with her boss and football's current bad boy, Tom Brady.

Shortly after, Nannygate news eclipsed other headlines, stealing attention from several fame monsters (see: Kim Kardashian). But the Santa Monica native refused to cower behind her proverbial stained blue dress. Instead, she emerged from obscurity into paparazzi flashes, soaking up her 15 minutes with a new car, bikini pics and a late night champagne bottle exchange with Ben.

In 1998, Lewinsky was deemed "a tramp, tart and slut," as she detailed during her TED2015 speech, not unlike phrases now being aimed at Garner's nemesis in hushed tones. When "Lewinskygate" was gaining overwhelming coverage, then 22-year-old Monica was humiliated and disgraced, especially when her secretly recorded convos with Bill were made public thanks to Linda Tripp.

For years following, every woman blamed for breaking up a marriage, from Alicia Keys to Angelina Jolie, was stained by the same rhetoric like a fur-wearing Samantha Jones at New York Fashion Week.

But my how times have changed.

Witnessing an outpour of praise for a supposed, proud home-wrecker is baffling, but secretly exciting to watch. Christine's unbothered behavior is downright likable.

Admit it: There's a tingling itch to cheer her on as she combats slut shaming with yoga mats and smiling pics. It's not a win for feminism -- or Bennifer's babies -- but still, Christine's brazen unwillingness to control the narrative of her exploitation is extremely telling of major shifts in public perception of sex.

Sure, we all hate cheating, in theory, but Christine's rise to almost-celebrity status proves women's sexual prowess is no longer shocking, sacred or taboo, even the extramarital kinds. We now only wish to celebrate her slightly obnoxious yet graceful handle on being media's prime obsession. It's practically fascinating to watch her flit around with no less than flawless, frizz-free hair and glamorous accessories.

It seems women today –– and apparently even "the other woman" –– are disallowing their agency to be stolen in any form, whether they've been naughty or nice.

Ouzounian isn't playing up that same tired script or throwing on an invisibility cloak in the wake of a two-person sideshow. She's not sadly boohooing in a corner for what she may have done to Ben and Jen's marriage. What's more? It's unlikely she even fell into a bad romance but rather made a play for what she wants: attention and that coveted spot on "The Bachelorette."

So, no, you don’t have to like Ouzounian but you do have to love her for silently proving how sexually liberated women have become and how even men are swallowing that non-surprising nugget of information.

No one is going to emerge a champion from this triangle so steeped in infidelity and deceit. And TBH Jennifer should go all "Gone Girl" on Ben for good measure. But one thing's clear: It may be time to toss all archaic beliefs about homewreckers and unnecessarily flashy drop-top-driving nannies aside.

As a whole, attitudes are changing about women and sex. What was once something that silenced Monica for years has now made Christine Ouzounian, whose flippant mood has casted shame back onto Ben, a star. At least for now.