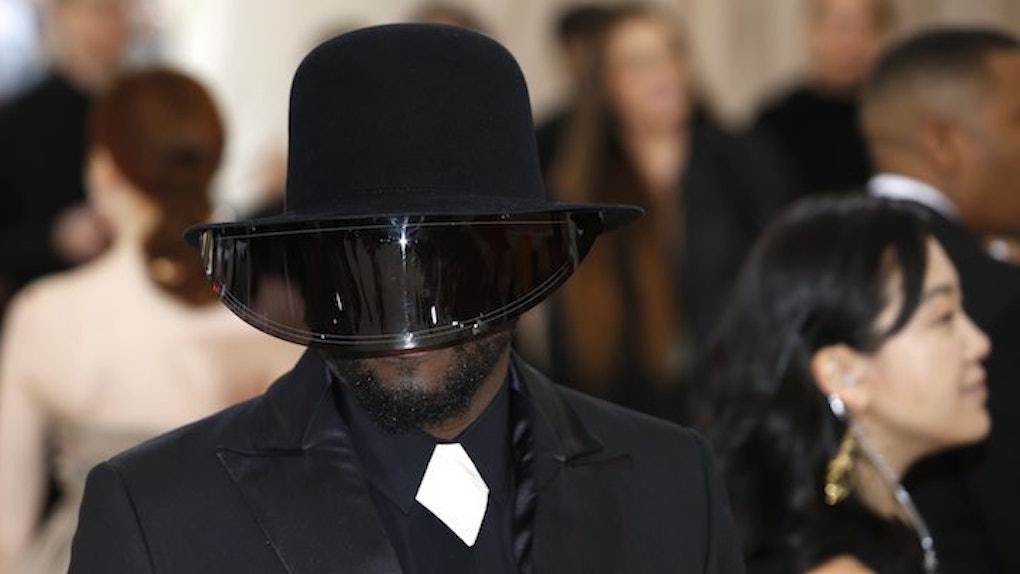 The 10 Absolute Weirdest Accessories At This Year's Met Gala

When you get invited to a party with a theme like “Manus x Machina,” you have two options. One, dress up like an actual robot. Two, let your accessories do the talking.

Unless you happen to look damn good in a glittery silver body suit,  you need to step up your accessorizing game, whether that involves getting fake tats, painful looking robot heels or all of the above.

Poppy Delevingne is shimmering on the #MetGala carpet in a @MarchesaFashion dress! https://t.co/9qpTjYgoFf pic.twitter.com/FC4gGTaowN — JustJared.com (@JustJared) May 2, 2016

I definitely wore that during my school's rendition of “Antony and Cleopatra.” Except mine were cheap plastic and hers probably weigh at least 20 pounds each.

Olivia Culpo got a tattoo.

Didn't know you were a secret coding nerd, Olivia.

Allison Williams got a futuristic mani.

Is it bad that I'm hoping she has to slap someone at the gala just so I can see the imprints of her nails on someone's face? Also, is it bad I hope that someone is Anna Wintour?

Taylor's heels are what nightmares are made of.

Her dress might look like a bad prom getup from 2006, but those heels are both beautiful and terrifying.

A lesson in striking a #MetGala pose with @AngelAlessandra, @Doutzen, and @missjourdandunn. pic.twitter.com/1wGVK6HaYL — Vogue Magazine (@voguemagazine) May 2, 2016

Zayn is going all Transformer on us.

Zayn and Gigi are about to arrive #MetGala pic.twitter.com/McG9vJsAfc — Music News & Facts (@musicnews_facts) May 2, 2016

Is it weird that I'm kind of turned on by this? Yes? OK.

This is her first time at the Gala. HER FIRST TIME. This chick will always be too damn cool.

Will.I.Am got this confused with a "Star Wars" convention.

At least, I THINK that's Will.I.Am.

We can all go home, because Orlando just won.

It's hard to tell in this picture, but Orlando's pointing out his Tamagotchi #MetGala pic.twitter.com/EeVVJXn5qE — Fashionista.com (@Fashionista_com) May 3, 2016

The HAIM sisters brought barettes back.

Can we all agree that this year's theme was basically an excuse to raid your high school Hot Topic wardrobe?