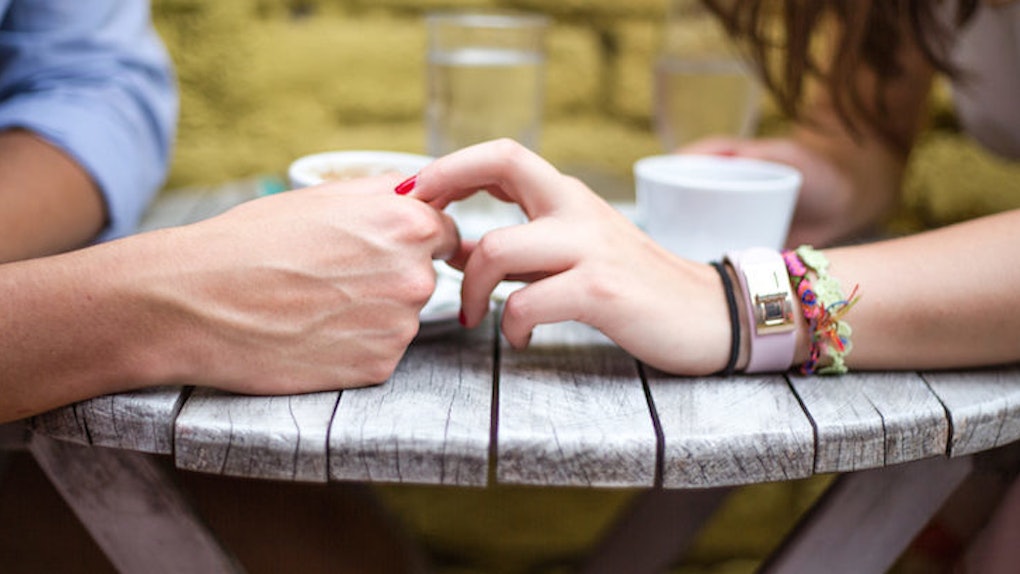 I Had A Relationship With A Married Man But No, I'm Not A Homewrecker

To be fair, it was a particularly difficult time in my life, too.

My stepfather, the only father figure I'd ever known, died two months earlier.

Fast forward to early August 2009, my freshman year of college. Instead of skipping town and going to college upstate like I wanted to, I chose to stay local to keep an eye on my mother. Better yet, I ended up contracting mono and was bed-ridden nearly all month. Ladies, if you want to lose 15 pounds quick, this is a fantastic way to do it.

All the extra bedtime left me to my own devices for most of the day. I was brain-numbingly bored, so I did the most rational thing a person in my position could do: I started responding to Craigslist ads. Specifically, the personals.

One man stood out. He had a career in law enforcement, was in his late 20s. Busy, yet bored. He was also unbelievably articulate, which was basically a recipe for disaster for me. I messaged him. I can’t remember what I said, but it was enough to get a response back right away.

We progressed to texting, then phone calls. I sent him naughty photos, he sent me his. This was before I was legal enough to use real dating websites (not that it stopped me before), and I was frankly flattered by the attention of an older man.

We met for the first time the day before my freshman orientation. This was when the first of many lies started coming to the surface. He wasn’t in his late 20s, he was in his early 40s. He did work in law enforcement and held a very senior position in the NYPD. He was also morbidly obese.

Nonetheless, I was intrigued. This was someone who seemed to delight in me, someone who wanted to listen to me lament about my stepfather, my crumbling mother, my lack of real friends. He seemed to value my opinion, which I desperately needed.

My primary communication with him happened through frequent emails. He said his phone was monitored by his supervisor at the force, and he didn’t want his boss to see the explicit nature of our conversations.

When I'd ask why I hadn't heard from him for a while, he would say he worked at night and didn’t want to wake me when I was asleep. I fell for it.

I didn't find out about his wife until months later.

We still hadn’t slept together. This was, however, something he was looking to rectify immediately. He suggested getting a hotel room in the city, which I wasn’t a fan of. It made me feel like a hooker. When I suggested going to his place, he said no, as the wife he was separated from still lived with him.

Hold up. Wife? He stressed he was separated. He insisted the part he liked about me so much was that I reminded him of her before she became a crazy psycho bitch. Okay, but were there kids? No, no kids. He hates kids.

He was a convincing liar. He swore the only reason they still lived together was because she was giving him a hard time about moving out and expected him to fund their looming divorce. He claimed he hadn’t loved her in years, hadn’t touched her in as long. He claimed she knew he was dating other women. I believed him.

He wanted to buy us an apartment.

He texted me one morning in October saying he was going to rent a place in the city for us.

“Don’t worry, I’m only putting my name on the lease. You won’t have any legal claim to it," he said.

I was skeptical. A place in the city for us to basically exclusively have sex?

“No, it’ll be a place to crash for both of us when we don’t feel like going home. Plus, you can do your homework there so you don’t have to go to the library," he further assured.

I still wasn’t sure. I always envisioned my first apartment to be filled with flowers and photos of my family and friends. Maybe I'd even have one of those chalkboard walls. A “Sex dungeon” wasn’t exactly what I had in mind.

I said no. He kept pressing. I was being a prude, he insisted. I said I wasn’t ready. My mother was starting to question my erratic behavior, combing my room for evidence. She never found any, though. I was obscenely careful.

His wife found out.

Oct. 30th, 2009. My mother and I went to see a Broadway show, as an attempt to cheer each other up after a particularly sh*tty few months. It worked, we were both blissfully, stupidly happy for a few hours. In the meantime, the climbing number of voicemails and unread texts on my phone were piling up.

I finally checked my phone the following morning and found a sh*tstorm.

"I have no feelings for you, never have, it was just sex…"

"Did you seriously think this was going to end well?"

Delete, delete, delete. I didn’t even bother reading the texts, I knew they were more of the same.

Later that day, I got an email from someone I didn’t know. No subject line. I read through it in a dizzying panic.

It has nothing to do with "daddy issues."

I was mainly raised by a single mother, so basically every time I make a sh*t decision regarding a man, the reason is always "daddy issues."

For the record, nearly every woman I know has made terrible decisions regarding men, whether or not she had a present father growing up. My admittedly sh*tty decision had nothing to do with my stepfather or my disastrous excuse of a biological dad, though it did paint the scene quite well.

We love to point fingers at the "other" woman. When boyfriends cheat and fathers leave mothers for younger pastures, we call the "other" women a whore, a slut, a c*nt. Basically, it’s her fault.

Listen, I’m not trying to stick up for that woman. Hell, I was cheated on before too and there’s no greater pain than seeing her face in every photo my ex posts on Instagram.

Not all of us knew what we were doing, and even if we did, we weren’t always emotionally and mentally aware enough to be blamed.

It’s not like I wake up every day regretting my decision to be with that man. I don’t wake up every day mourning for his wife or wondering what he’s up to. In fact, I don’t think about him at all. I’m not sure if his wife was as lucky, and to be fair, I wish she was. I hope she got out because frankly, I don’t believe for one moment I was the only one he was fooling around with.

I never spoke to him again, though that doesn't mean I stopped making bad decisions. At least now I know the men will never have rings on their finger.

*Editor's note: Some identifying details were changed to maintain anonymity.