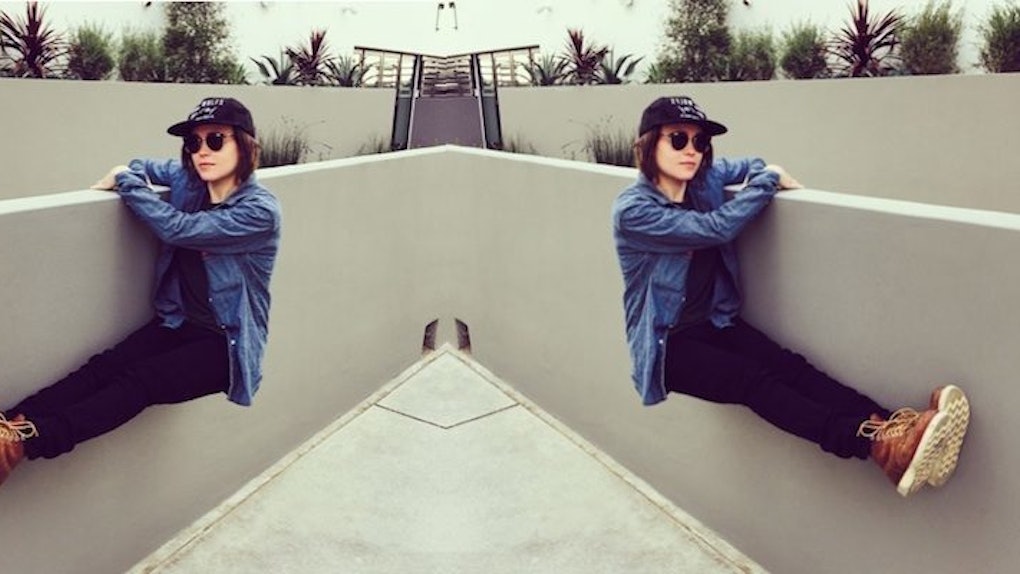 Woman On Top: Lesbians Are Changing The World And Pop Culture In 2015

In 2014, we practically worshiped the booty. After a year of jiggling cheeks and songs that only pretend to be about Amazonian snakes, pop culture is ready to elevate its taste.

That brings us to the most crucial declaration you’ll hear this summer: 2015 is the year of the lesbian. Women who love women are rapidly making their way into the spotlight, gaining recognition in the urban social scene, the music industry and on the screen.

In 2014, the most recognizable lesbians were Ellen DeGeneres and Portia De Rossi, the couple even your conservative mother can love. But in the last six months, we’ve widened our scope of focus.

When the gender-fluid beauty arrived on Netflix's prison dramedy "Orange Is The New Black," thousands of viewers – both straight and gay – lost their minds over her.

Between her artfully designed tattoos and movie star face, even the straightest of us were caught staring.

Rose is the official girl crush of the year to date, the unattainable epicene beauty who exemplifies a growing trend.

Gender identity, once relegated to LGBTQ blogs and small audiences, is now at the forefront of the social hive mind.

While the straight community finally acknowledges its lesbian counterparts, the change stretches beyond that.

We’re thirsty to see lesbians, to understand the community and what it's like being a gay woman.

At home and in the public eye, the lesbian voice has never been more sought after.

The only people who weren't surprised are those who have played an active role in queer and lesbian culture for years.

Traditionally, the lesbian community has remained rather insular. Although gay men only semi-grudgingly shared their bars and culture with their straight companions, lesbians seemed to keep to themselves.

So naturally, a certain level of mystique gradually built.

Trapped on the outside of relationships they didn’t understand, the average person turned to Google instead, attempting to gain some level of understanding.

And, on the Internet, all roads eventually lead to pornography (Rule 34, if you're interested).

According to Pornhub’s 2014 data release, the word “lesbian” was the second most frequently searched term on their American website last year – an 81 percent increase from the previous year.

It doesn't even matter that most of the actresses involved aren't necessarily even lesbians -- it's the idea that interests us, not the execution.

Our culture is heavy on the idea of “experimenting,” making lesbian relationships seem exotic and taboo instead of acknowledging their foundation in raw, human emotion.

But in 2015, lesbians capitalized on a growing culture of openness and crashed through the barriers separating them from pop culture. And boy, are we glad they did.

Millennial lesbians are more out than ever.

If you've pulled ideas about the lesbian community from stereotypes about being gruff or distant, meet the femme force gaining traction.

Femmes, the overarching term for lesbians who dress in cis-conforming ways and would still rather slip into stilettos than sneakers, were overlooked in the gay scene for many years.

The general concept, known as “femme invisibility,” is the idea hyper-feminine lesbians were exiled from their community because it's difficult to visually identify them.

But, as the femme community finds its voice, its influence extends into pop culture. We’re not just talking about indie movie theaters, either.

For better or for worse, a lesbian with long hair and false eyelashes easily fits into society’s traditional idea of what a lady should look like, making her easier for the average person to unquestionably accept.

Ideally, we’d all be able to accept one another regardless of sexual preference –- but that’s very rarely how the world works.

However, femmes pave the way for a better understanding of androgyny and masculinity.

If we begin questioning what makes a woman, if not her sexual attraction to a man, a whole new intellectual space opens up. Other criteria can define a woman.

Lesbian DJs were at the forefront of social change.

The secret weapon: a DJ turntable.

Artists use music as a social catalyst, and the lesbian community’s rise is no exception.

One of their greatest assets is the DJ, relying on killer beats to blend fans into one pulsing crowd — no matter their sexuality.

If EDM music is our generation’s rock ’n’ roll and the Electric Daisy Carnival is our Woodstock, then the lesbian DJ has a pulpit to preach from that transcends social class and geographic boundaries.

Although plenty of media outlets mourned the death of the all-girl bar in urban areas across America, that's not to say women aren't gathering.

Instead of perpetually swilling cocktails in a dive bar, prominent lesbian music makers like Day provide and promote all-girl dance parties every night of the week.

Music has opened the floodgates, offering a chance for lesbian and straight culture to intermix. For the first time, there’s no nerves or awkwardness, just beats. Everyone can appreciate a talented artist.

Furthermore, the party scene provides a chance for every kind of lesbian to intermingle.

Dance parties and electro music are a new type of activism, a "look at me now" boldness that brings every member of the community together.

Undivided, the statement they make is louder than ever: We are here, and we are a pop culture powerhouse. What's more, we're having fun together.

Popular media is finally getting the message.

Alongside the increased visibility of lesbians in the club scene, they're also growing in popularity onscreen and the media.

It's been five years since fan favorite "The Real L Word" gave a reality show face to urban lesbians, but its influence is inestimable.

An entire generation of reality TV-fed youth watched real women interact, instead of some studio executive's warped idea of them.

In the last few years, big-name celebrities like Jodie Foster and Ellen Page have felt secure enough to reveal their sexuality, trusting the public to respect them regardless of who they love.

Still not convinced a lesbian presence is here to stay?

Look no further than the third season of "Orange Is The New Black," one of the several representations of well-written, not cis-normative women on the big screen.

As Indiewire notes, this year has the potential to see gay actress Lily Tomlin win accolades for playing a lesbian character in "Grandma."

The website even deemed 2015 the potential "year of the lesbian at the Oscars," judging by the sheer scope of gay roles on screen.

Perhaps Page, who came out during a 2014 speech, expressed the shift in acceptance best.

I expected so much more hate... It was just remarkably positive, which is beautiful because it’s indicative of the change that’s happening.

The change of which Page spoke seems to be finally here. This year is, after all, when the Supreme Court finally legalized gay marriage across the board.

After the US National Team had won the FIFA Women’s World Cup in early July, thousands of passionate fans looked on via live broadcast as player Abby Wambach ran to kiss her wife Sarah Huffman.

Tweets proclaimed #loveislove, giving props to the media for showing a lesbian couple the same air time as any other.

In the decade since gay men made their breakthrough on reality television and in the media, we seem to have learned a thing or two about how to be curious and partake in a culture without exploiting it.

Gone are the cringe-worthy days of "Queer Eye For The Straight Guy" and gay BFFs being discussed as if they were fashionable accessories for straight women.

Lesbians are the beneficiaries of a culture based on social media where we are beginning to think first and speak afterward.

In other words, they're responding to the curiosity and making their presence known.

Indeed, 2015 is the year lesbians come out on top. With six months left to go, we're ready for a cultural shift. You go girls.