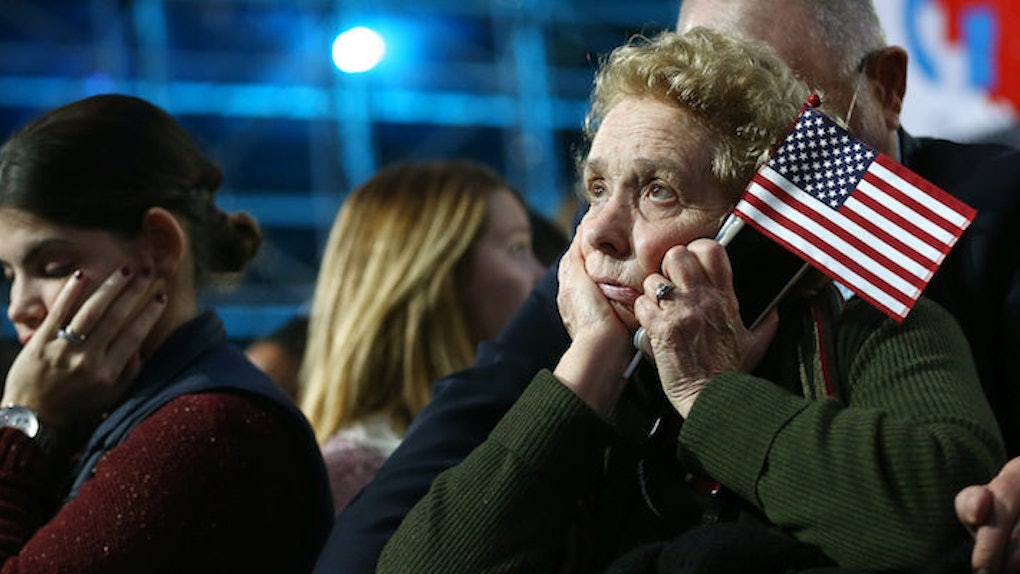 How Every Woman In America Relates To Hillary Clinton

You don't have to like Hillary Clinton to relate to her as a woman in America.

After I watched her concession speech this morning in a room surrounded by other women shedding tears, it became clear this campaign was about more than just a woman holding the office of the presidency.

This campaign was a macrocosm for the experience of women all over America.

Hillary Clinton is a champion for every woman who has ever worked hard and long for a position, only to see that opportunity be given to a man who is objectively, glaringly less qualified than she.

Her loss is a symbol of the loss we all feel when we've shown human weakness and been told we don't have the "stamina" to achieve what we aim to achieve.

Women everywhere in America have had to endure the injustice of a male competitor getting off for his brazen mistakes time and again while we are reminded daily of the mistakes we've made in the past and even blamed for those of our husbands, as if we have some power over them.

We have all surpassed our male competitors in experience while having to suppress any outward display of pride in ourselves or our work, lest we be labeled over-bearing.

We have all remained cordial while obvious attempts have been made to provoke us, knowing our restraint won't be noted, remembered or counted when we finally express our frustrations and are forever marked as a hysterical woman.

We have all asked ourselves how we will ever be heard if we aren't taken seriously no matter what volume we use to speak out.

We have all listened patiently to a man, only to be interrupted when it is our turn to speak.

We have all spent an entire evening in isolation, inconsolable over the injustice of it all, only to plaster a smile on our face and go to work the next day without mentioning those injustices.

Yes, there are women in this country who voted for Trump. There are women who defended and elected a man who has been accused of sexual assault multiple times. Yes, his wife, Melania was one of those women. I don't blame these women for Trump's election.

I was blind to misogyny and sexism in my own life at one point. After seeing the outcome of this election, I'm realizing I was still blind to the degree of sexism that exists across this country.

My hope, for Hillary and for women all over America regardless of who they voted for, is that we find the strength in ourselves to acknowledge these injustices in the world and in our daily lives and stop being silent about them.

This may take a long time to catch on ladies, but we don't have to be nice anymore.