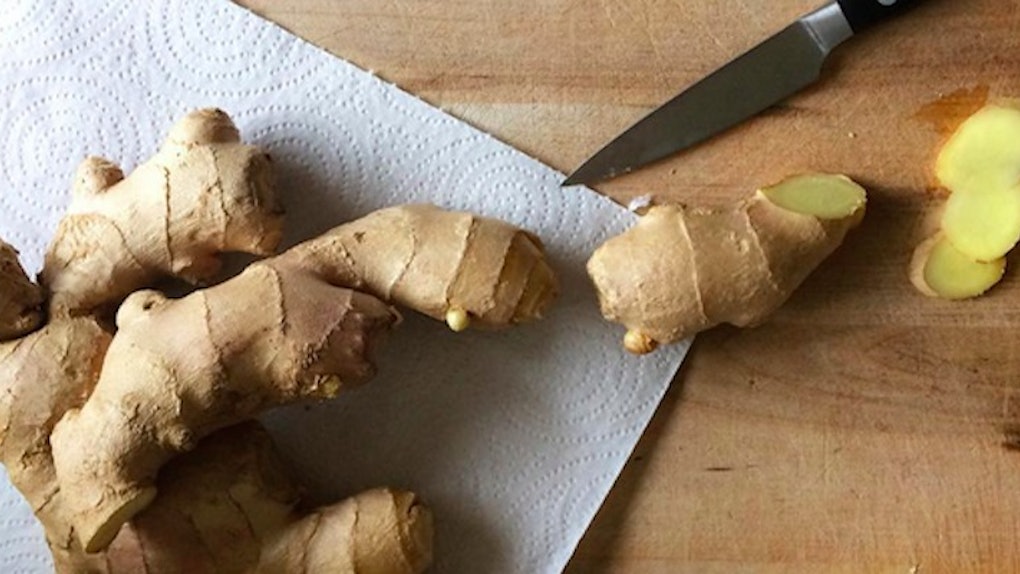 Ginger is having a moment.

No, not redheaded people — hi, Prince Harry — but rather, the gnarled root. Whether you take your ginger in a powdered spice, a thinly sliced cooking accompaniment or an herbal tea, odds are you're not utilizing this fix-all root to its full potential.

Like many fellow spices, ginger positively affects both the body's exterior and interior. Beer might make you feel good, but ginger will do the same while ensuring your skin glows.

If you've never sampled the spice outside of the slimy pickled version included on sushi plates, have no fear. Start with a natural tea bag, and take the DIY steps one at a time.

Before you know it, you'll be the most granola millennial you know. While your friends endlessly extol the values of barre classes and juice cleanses, you'll be the one preaching the gospel of ginger.

Ginger root is inexpensive and effective, so there's no reason not to pick it up at the grocery store. You can even freeze the flowering plant for weeks at a time, so there's no need to rush finishing up the root.

Fresh roots are found in the produce section, nestled between the fruit and vegetables. Pick one with skin that lays flat, without appearing wrinkled or dried out. Actually, choosing one is the easiest part -- the real skill lies in learning how to prep and save the root for multiple uses.

Instead of slicing a chunk off, go about the process methodically. Wielding the back of a spoon instead of a knife, scrape away the ginger's thick layer of skin. Then, chop into 1-inch square cubes and drop into a plastic bag or aluminum foil. Store the bag in your freezer, ensuring the root will be manageable for future use without having to hack away at it.

With its armlike nubbins and bending shape, ginger won't be winning any beauty awards. To be honest, it looks a bit more like a “Harry Potter”-style Mandrake root than anything you should ingest.

Don't let the root's often-humanoid shape put you off: Ginger is the single ingredient your beauty routine has probably been missing. The root contains gingerol, an anti-inflammatory ingredient that's helpful in bringing down facial puffiness. After a long night out, a homemade ginger mask may be just the thing.

Ginger isn't only good for reducing puff, it can brighten and even out the skin as well. It's a cult remedy among those who suffer from hyperpigmentation, caused when excess melanin builds up in certain areas. Whether it's a dark line caused by stitches or a mark left from a spectacularly nasty pimple, ginger is the best way to even it out.

Not handy in the kitchen? Brands like Origins sell the root's magic in bottled form.

If you struggle to grow long hair that doesn't split at the faintest hint of a breeze, it's time to take action. In the business of beauty, it's a well-known fact ginger heals damaged or broken hair, giving it the strength to grow long. It's also a cure-all treatment for dandruff and stubborn strands that refuse to grow.

To increase circulation to an undamaged scalp – thereby encouraging slow-moving follicles – try applying a mixture of oil and grated ginger, massaging into the roots of the hair. Like all oil masks, this treatment is best left on as long as possible. Then shampoo, rinse and go about your day.

Playing Martha Stewart isn't for everyone, so you have the option of buying preprepared ginger shampoo and conditioner instead. It won't have the same sense of satisfaction, but your hair will breathe a sigh of relief.

Heal your insides, one sip at a time.

The best part about ginger: It works from the inside, not just as a cosmetic fix.

Perhaps the most frequent use of the herb is in a caffeine-free tea, which you can make using either a tea bag or potent grated root. Thanks in part to its warming effect, the brew is an excellent choice for cold or flu management.

But, it's important not to wait until you're sneezing before boiling the hot water. Ginger is well known as a cure for digestive problems, easing a stomach upset by spoiled food or overly rich ingredients. When taken in pill form, it will even lessen exercise-related muscle pain.

It'll even help eliminate nausea, whether food-induced or the carsick variety. To fix the problem on the go, try sucking on a ginger chew or flavored snack.

If the urge to vomit comes from an excess of Friday night tequila, not an actual illness, swallow a full mug of ginger tea before panicking. In all likelihood, the same cure used by pregnant women with morning sickness will work for even the most hangover-unhappy.