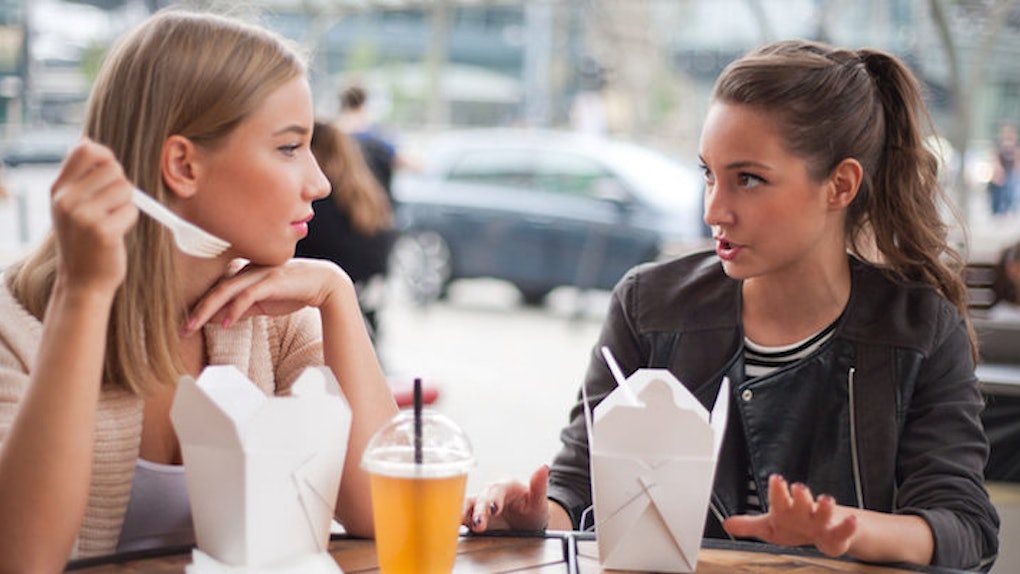 “I don’t want to see you anymore!"

Think about the last time you said those three things and actually meant it. Chances are, they were to one of two very important people: your best friend or your significant other.

You can’t stand that they’re always hanging out with other people and not you. You can’t deal with how they never put you first, or how they just aren’t that into you anymore.

While both breakups are enough to shatter you emotionally, there is a silver lining: You’re now a glorious, unattached woman (like Taylor Swift pre-Calvin Harris) -- and who needs people, anyway?

Whether some jackass just dumped you or your college roommate-BFF decided she hates you (or you hate her, whichever), you’re bound to feel all the things.

Bye-bye boyfriend: "Irreplaceable," by Beyoncé. "Me, Myself and I," by Beyoncé. Basically, anything by Queen Bey that isn’t about riding surfboards.

Adios, bitch: Seeing as you have just found your own version of Selena Gomez (or Katy Perry, whichever) you’re probably “Bad Blood”-ing all over the place. Karlie Kloss not included.

Bye-bye boyfriend: You’ve probably already convinced yourself that you’re never having sex again. Greener pastures are out there, sweet thing, and they’re battery-operated.

Adios, bitch: Now that you don’t have to run to your brunch dates or after-work yoga class, you now have all the time in the world to f*ck anything on legs -- and not be judged for it. There’s also no one to tell you to swipe left on all the creeps on Tinder, so you have date night all planned out for the next three weeks straight.

Bye-bye boyfriend: You’re totally going to text him when you get too drunk during company happy hour. It won’t even make sense, though he’ll probably think all the eggplant and water emojis mean that you want a booty call for the night. Stay strong, girl. There’s apps for that now.

Adios, bitch: You’ll wait for her to text. She won’t. One day, when you’re feeling extra lonely, you’ll see she’s on Facebook and you’ll say “heyy,” because “hey” sounds like a prelude for a deep speech and “heyyy” sounds like you had too much tequila. You’re pretty much the Goldilocks of greetings.

Bye-bye boyfriend: You will go through all of his Instagram likes and try to figure out if all those girls liked his gym selfie because he hashtagged fitspiration, or if they just think he’s hot. Sh*t, has he been working out? Those abs look new. He totally misses you.

Adios, bitch: She went to your favorite brunch place and then Snapchatted it? That’s low. You then proceed to unfollow her from every social media outlet (except Facebook, because you’re not in middle school) but you still visit her Instagram 18 times a day just to make sure she’s not hanging out with her new friends too much. Purely research purposes.

Bye-bye boyfriend: He said he liked you with long hair? Cut it all off, dye it pink and Instagram the sexiest selfie you can muster. Oh, and get Classpass because you want to have a sick body for when you run into him at your local drugstore, except you’ll only go to two hot yoga classes then give up.

Adios, bitch: Your former BFF dyed her hair blonde? Doesn’t matter, because you’re gonna go blonde too — and you’ll go even lighter. She starts working out? You join Crossfit because you’re way too intense for her, anyway.

Bye-bye boyfriend: It’s basically girls’ night every day of the week. Who needs guys? Let’s have sex like men, ladies! Just kidding, let’s stalk him on Instagram and call every girl he follows ugly.

Adios bitch: That chick you were kind of friends with in middle school but moved to the other end of the country? She can be your new BFF. That dude that works in accounting that you’ve said maybe three words to since you started working there, but he has better taste in socks than anyone you’ve ever met? Best friend material. There’s a world of platonic possibility at your feet.

Bye-bye boyfriend: Anything that has carbs is fair game. You’re going to work it all off with that Classpass you just got, anyway.

Adios bitch: Screw eating — just Instagram everything that goes on your plate because you want her to live in jealousy of you and your perfect eggs benedict and latte art.

Bye-bye boyfriend: Oh, he hated this shirt? Wear it loud, wear it proud. He always thought that skirt was just a little too short? Wear it to work. Just run past HR and no one will even know.

Adios, bitch: She’s been eyeing that leather jacket for months and couldn’t bring herself to buy it? Get it — in her size, too — and show off your spoils in agin-fueled photoshoot in front of your laptop. It looks better on you anyway.