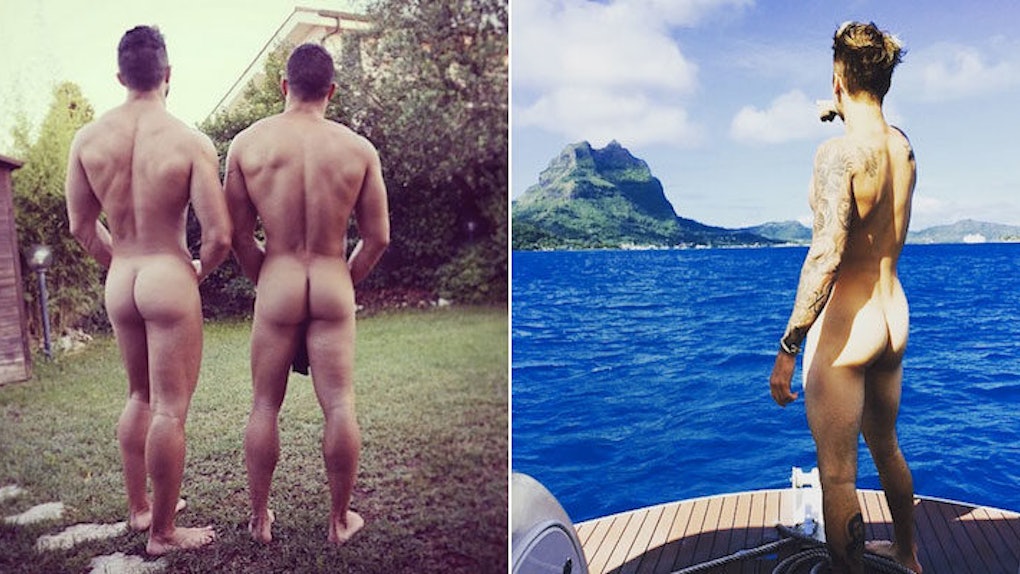 Sure, man butts are nothing new with the Derriere Renaissance we’ve been experiencing, and we ladies couldn’t be happier about it.

But lately, it feels like all the accolades have been strictly cast to women only. And as we know, men are the true asses of this world. It just feels unfair to leave them behind.

Because man-butts are glorious glory holes. They bounce, but won’t bounce when you need them. They stand up for you, but also know when to take a backseat.

Science may tell us that poop comes out of there. Christian Grey might be prevented from slapping any around. Channing Tatum might threaten to cover up his for good.

But that won’t stop us from admiring a man’s tush with more longing than a “Bachelorette” contestant.

Life is simply better with a side of trufflebutter, and now that the sun’s out, the buns are out too. Here are 18 reasons girls love a man with a nice butt.

Your man might come off strong and tough, but no matter what, he’s always got a soft spot. He gets in tush with his love for you.

2. You can look at his ass when you’re done kissing his face

...We’ll let you fill in the rest. But just know, it’s always an option when meat is on the menu.

3. He knows when to butt out of your lady problems

Riding the crimson wave? Struggling with an evil bestie?

Your man is there to support you unconditionally while also understanding that some things need to be dealt with on your own.

4. He looks amazing at pool parties

Not only is he great arm candy for you, he’s also great butt candy for all your friends.

People will appreciate that you brought such a beautiful bum to the party and are willing to share the eye-space.

You’ll feel proud of your asstastic man as you two are getting jiggly with it.

5. He’s the cushion when you fall

Oh yeah, it’s cheesy but you know you like it.

If you trip up in life and conveniently land on his ass, it really feels like waking up and smelling the roses.

6. There’s someone other than you bouncing in bed

Tempur-pedic mattress my ass! That thing is pure jelly. Now you two can be twinsies!

7. He can handle being the butt of a joke

He’s thick-skinned enough to withstand a harsh punch line. The best part about him is his appreciation for a good joke, even if it’s at his expense. He just wants to spread the good time.

8. He can dance well

He knows how to move his body and get down. A man with a great butt has spent his life working at it, so he’s used to shaking things up especially on the dance floor. Man-butts are meant for grooving with, after all.

Give your head a real rest by laying on his pleasantly perky peaks. It’s the ultimate pillow: soft like high thread-count sheets, firm in all the right places and won’t mind your drooling over it.

10. He'll motivate you to do more squats

You won’t want to be caught sitting on your ass when he’s hustling his.

Instead of taping fitspo pictures of J.Lo and Nicki on your fridge, you can just admire his. As it walks away to go to the gym, you’ll be sure to follow.

11. You know he has good genes

According to studies, a big butt is actually good for your heart and brain. Now that’s something to grab onto.

12. You celebrate sexual diversity and the disintegration of gender roles

Reward yourself knowing that you’re fighting for men’s butts to be looked at just as equally as women’s.

Your relationship, like his derriere, is perfectly healthy because you two have a solid mix of competition and compatibility.

You aren’t afraid of the attention he receives from other women, and he knows who that ass comes home to.

...Or else, it’ll be flattened faster than Taylor Swift's high-note at the Grammy's.

14. He looks hot in skinny jeans

The tighter, the better. You can look and tush!

Even when you’re lacking on your own, he’s got plenty to help bolster you.

He’d never let you hit the ground too hard. And when you fall flat on your ass, he understands.

16. You have something to grab during a makeout

….Other than his dick. His butt doesn’t get in the way or complicate things.

17. It’s fun to ANALyze his every move(ment)

Just watching him do the dishes is entertaining. You forget about the laundry because his ass is doing the spin cycle.

Life with a nice butt is pretty kick-ass.